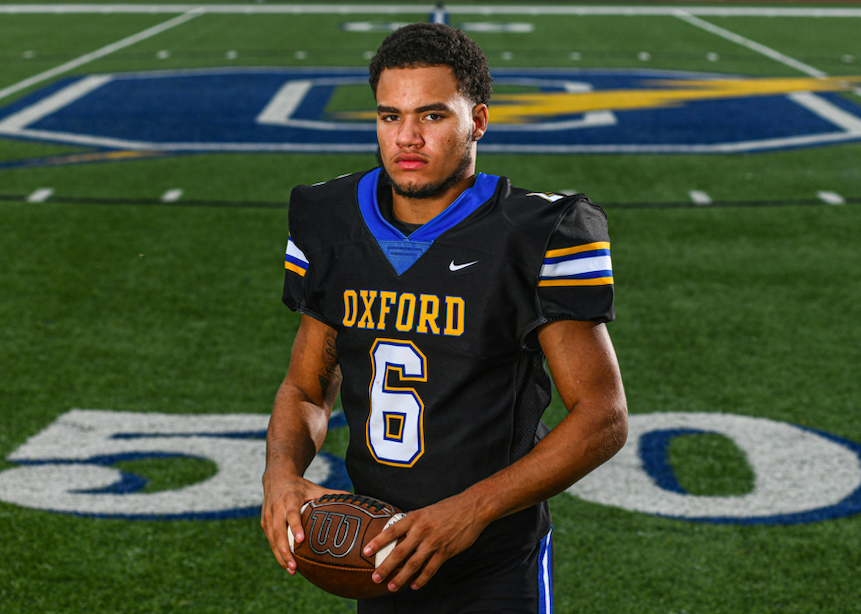 Oxford linebacker Tristan Shorter is this year’s Oxford Eagle Player of the Year and a member of the EAGLE 2020 All-Area Football Team. (©Bruce Newman)

Oxford’s Tristan Shorter knew he was going to have to become a leader on defense in 2020.

With the Chargers’ losing nine of their top 10 tacklers from the 2019 championship season, the onus was on the senior linebacker to become the quarterback of the defense. Shorter took that role head-on and helped lead the Chargers to a second-straight Class 6A state championship appearance.

The Arkansas State signee’s performance on the field, including key plays in the postseason, helped earn Shorter this year’s EAGLE Player of the Year honor.

“I think Tristan is a guy, who has a knack for making big plays,” said Oxford head coach Chris Cutcliffe. “Obviously turnovers throughout his career and blocked kicks. But he always seemed to make tackles on big plays. …I do think he does do a great job of making people better. Tristan, I think, understood the responsibility of our defense was kind of going to go as he went. When he had a great day on the practice field, everybody else had a great day. When he had a great day Friday night, everybody else was, too.”

Without having spring practices, due to COVID-19 and a limited summer, teams had to dive in head first at the start of the season in early September without really knowing what they had.

Shorter embraced that challenge of being the leader who carries his teammates through the early portion of the season, helping them find their footing.

“I knew coming in I was going to be leading, so I kind of learned from last year’s group. They showed me how to be a leader,” Shorter said. “It kind of came easy to me after seeing what they had done. So, I made everybody come in and work.”

Shorter’s presence was felt all over the field. In his final season at Oxford, Shorter recorded 65 tackles, six interceptions, three fumble recoveries and four touchdowns.

Throughout the season, Shorter manged to find himself in the right spot at crucial moments of games and Oxford’s season. Against Madison Central in the second round of the playoffs, Shorter stopped Jaguar’s quarterback Victor Sutton II at the goal line on a two-point conversion to clinch the game. The following week, Shorter swatted a pass out of the air on fourth down at Clinton to clinch a second-straight North Half championship for the Chargers.

“I knew I was going to be all over the field, so I kind of worked on a lot of (defensive back) stuff and a lot of safety stuff,” Shorter said. “I knew I would be a utility player. …I tell all the coaches to put me wherever they need me and I’ll play.”

Harvey and Trip Maxwell rotated in and out all season as the Chargers’ quarterback. But the junior took over sole control under center late in the season and during the Chargers’ postseason run. Harvey threw for 1,190 yards and 13 touchdowns in 2020.

There were several star players on the Chargers’ offense, helping Harvey find success. Omar Howell was one of those who helped the run game become a dominant force in the later stages of the season. Against Clinton, Howell rushed for over 200 yards. He finished with 855 rushing yards and 10 touchdowns, averaging five yards a carry.

“I think Omar got stronger as the year went on,” Cutcliffe said. “He worked his tail off in the weight room. His conditioning level continued to improve throughout the year because he works his tail off. I think when you do that, you can be playing your best football late in the season when other guys are starting to get nicks and bruises and get tired.”

The Chargers’ wide receivers room was full of playmakers in 2020. Led by Jalen Webb, DK Johnson and Jay Wortham, the receiving corps combined for 1,887 yards and 30 touchdowns.

“I think our receiver corps was fantastic,” Cucliffe said. “It was very senior-heavy. Some guys didn’t have a lot of experience, necessarily. DK Johnson had a lot of experience. Other guys, not so much game experience, but they were veteran players who had been with us for a long time and really worked and developed over the years.”

The Chargers’ special teams unit was anchored by one of the top kickers in the state in Jack Tannehill. The senior was a perfect 36-for-36 in extra point attempts and made 15-of-18 field goal attempts in 2020. Tannehill’s longest field goal was from 45-yards out. He also averaged nearly 42 yards a punt.

Along with Shorter, Sanford became a force on defense for Oxford. The sophomore linebacker finished with a team-high 109 tackles, two fumble recoveries, two blocked punts and one scoop-and-score touchdown.

Lafayette’s season came to an unfortunate end, but the Commodores had plenty of players make it as special a season as possible. The Commodores were anchored by Williams, who was thrusted into the starting quarterback job last season but grew into a leading player in 2020.

The junior finished with 1,119 passing yards and eight touchdowns. Williams also finished as the Commodores’ second best rusher with 462 yards and seven touchdowns on 55 carries.

“I thought every snap (Williams) took he got better,” said Lafayette head coach Michael Fair. “We all know he’s got a great arm. His accuracy, I think, is one of the best young quarterbacks I’ve ever been around. He’s able to put the ball where it needs to be in tight windows. The opportunity to run a zone-read option for us really put some of the defenses in tough situations throughout the year.”

Vaughn led the Commodores’ receiving unit with 642 yards and five touchdowns on 43 receptions.

Lafayette’s run game became a force as the season progresses, led by Reed with a team-high 1,249 yards and 1o touchdowns on 198 carries.

“We were hoping, but I didn’t expect (Reed) to come this early,” Fair said. “We saw him coming through our middle school program and had a good ninth-grade (season) last year. I don’t think anybody expected him to average almost a 140 yards a game for us.”

The Commodores’s defense was led by Toles, Wilbourn and Burgess as the trio combined for 213 tackles this season.

Wilbourn recorded a team-best 110 tackles and six sacks while hurrying the quarterback seven times. Burgess led the team in sacks with eight to go with 67 tackles. Toles finished the seasons with 36 tackles, four interceptions and eight blocked field goals.

“A quarterback of the defense,” Fair said of Wilbourn. “He gets everybody lined up and as the year went on I saw him get more and more vocal in being sure everybody was where they needed to be defensively. When you can have an extension of your coaching staff out there playing every snap at a high level, your defense has a chance to be really special.”

Water Valley made it to the first round of the Class 3A playoffs and fought through unique circumstances at the beginning of the season, quarantining the first two weeks due to COVID-19.

Telford was the Blue Devils leader at quarterback, passing for 843 yards and five touchdowns. He also rushed for 470 yards and three touchdowns on 116 carries.

Jaden Morgan led the Blue Devils in rushing with 603 yards and 10 touchdowns on 95 carries.

Jenkins finished with 46 tackles and a sack on defense.