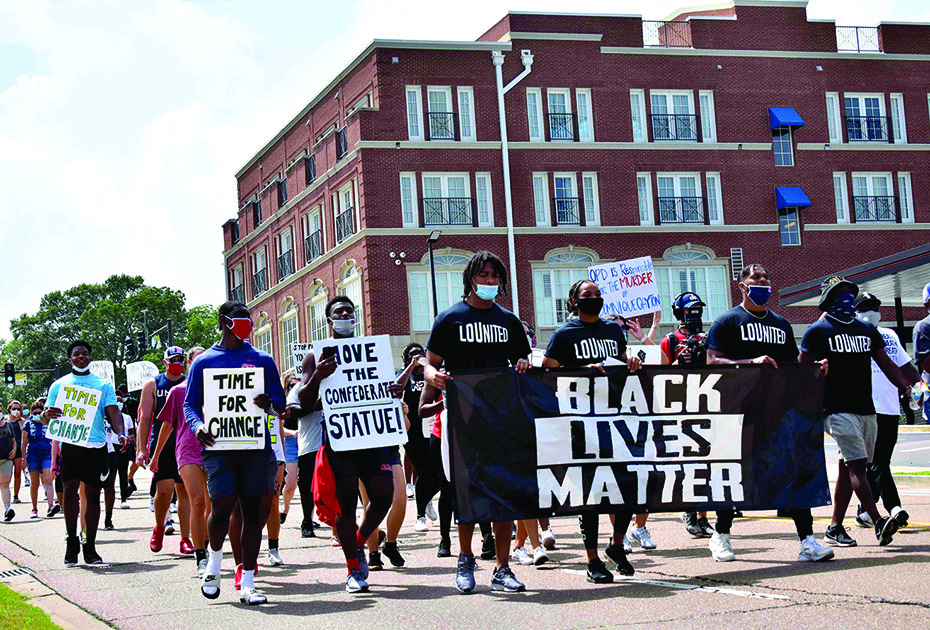 Editor’s Note: This is the second installment of our four-part series, taking a look back at some of the most notable stories of 2020.

The first quarter of 2020 saw Lafayette County, and the world, come to grips with the COVID-19 pandemic. As the virus raged on, the second quarter of the year saw people begin to come together in a time of major crisis.

Progress in Mississippi started in late May and June with the process of changing the state flag beginning and physical reminders of the state’s troubled past being erased with Confederate statues coming down or relocated across Mississippi.

With the COVID-19 pandemic arriving in March, shutting down Oxford and Lafayette County, members of the community began doing their part to help keep their neighbors and fellow residents safe.

Hand sanitizer and facial coverings became the key weapons in the fight against COVID-19. Due to that, local stores could not keep these items on their shelves long enough and supply was not keeping up with the demand.

To that end, Jackson-based Cathead Vodka and Taylor-based Wonderbird Spirits began manufacturing and providing free hand sanitizer to residents. The City of Oxford held drive-thru distribution locations throughout the city as residents lined the streets to receive the free sanitizer.

Oxford’s Chick-Fil-A partnered with Visit Oxford to provide 7,000 free facial coverings made out of the 2020 Double Decker t-shirts that were no longer of use.

Oxford was set to celebrate the 25th anniversary of the Double Decker Arts Festival this past April, but the COVID-19 pandemic forced Visit Oxford to make a tough decision.

The annual two-day festival was originally postponed to mid-August, but as the pandemic rolled on through the year the Spring tradition was canceled altogether and plans were focused on 2021’s edition.

The Oxford Film Festival moved from February to March this year for the first time, meaning it was also forced to alter plans. Orgininally postponed to a later date in 2020, festival organizers shifted gears and transitioned the event into a virtual format.

What is normally a four to five-day event became stretched out from April to September with new films featured weekly and in June, the OFF Drive-In was created and continued on through the rest of the year as the outdoor venue became an instant success.

In May, a man wanted in connection with a murder in Arkansas found his way to Oxford and started a pursuit with law enforcement that resulted in the suspect losing his life.

A US Marshal was part of a team looking to execute an arrest warrant for the suspect, who was presumed to be in Oxford. The execution of the warrant led to a pursuit which ended on South Lamar Boulevard near the intersection of Azalea Drive.

With the suspect’s car pinned to the side of the road, he drew his gun on the Marshals and other local law enforcement. A brief shootout between the suspect and the officers ensued, resulting in the suspect being pronounced dead on the scene. A US Marshal, Bob Dickerson, was shot and rushed to Baptist Memorial Hospital-North Mississippi.

Seven days later, Dickerson was released from the hospital to a hero’s welcome, including a parade through Oxford. U.S. Senator Roger Wicker was at the hospital to speak with Dickerson and thank him for his service.

May also saw local businesses begin to slowly reopen their doors with the Oxford Board of Aldermen voting to being Phase 1 of their “Serving Oxford Safely” recovery plan.

After weeks of providing curbside service, which turned into local deliveries only, Oxford’s small businesses dusted off their counters and opened up their doors once again the first week of May.

The stores had to follow strict guidelines, including limited capacity. The ability to welcome customers back into their stores came not a moment too soon for several local business owners who were feeling the crunch as some did not have the ability to provide online shopping like many of the major retail chains.

Since May, business has slowly returned to Oxford the the City is still feeling the effects nine months into the pandemic.

A QUEST FOR CHANGE

The summer months brought about social unrest across the country with the deaths of several African-Americans at the hands of law enforcement, including George Floyd who died while in the custody of Minneapolis police as an officer kept his knee on Floyd’s neck.

Marches, protests and riots started across the country, including in Oxford. The Ole Miss athletics department held a private Unity March on campus to allow athletes to use their voice and speak about the current events and national issues.

Two football players, MoMo Sanogo and Ryder Anderson, helped organize a Unity March that began on the Downtown Square and went down University Avenue to the Old Armory Pavilion. The march was against racial injustice, police brutality and in favor of removing the Confederate statue from the grounds of the Lafayette County Courthouse.

Another Confederate monument was removed in Oxford in what was an unprecedented decision by the University of Mississippi. Last year, the school announced its intentions to move the statue located on the Lyceum Circle, a central location of campus, to the Confederate cemetery behind the C.M. “Tad” Smith Coliseum.

In mid-June, the Institutions of Higher Learning’s Board of Trustees approved the University’s relocation plan, giving the final approval needed to move the statue.

The new design was set to be voted on as part of November’s general election.