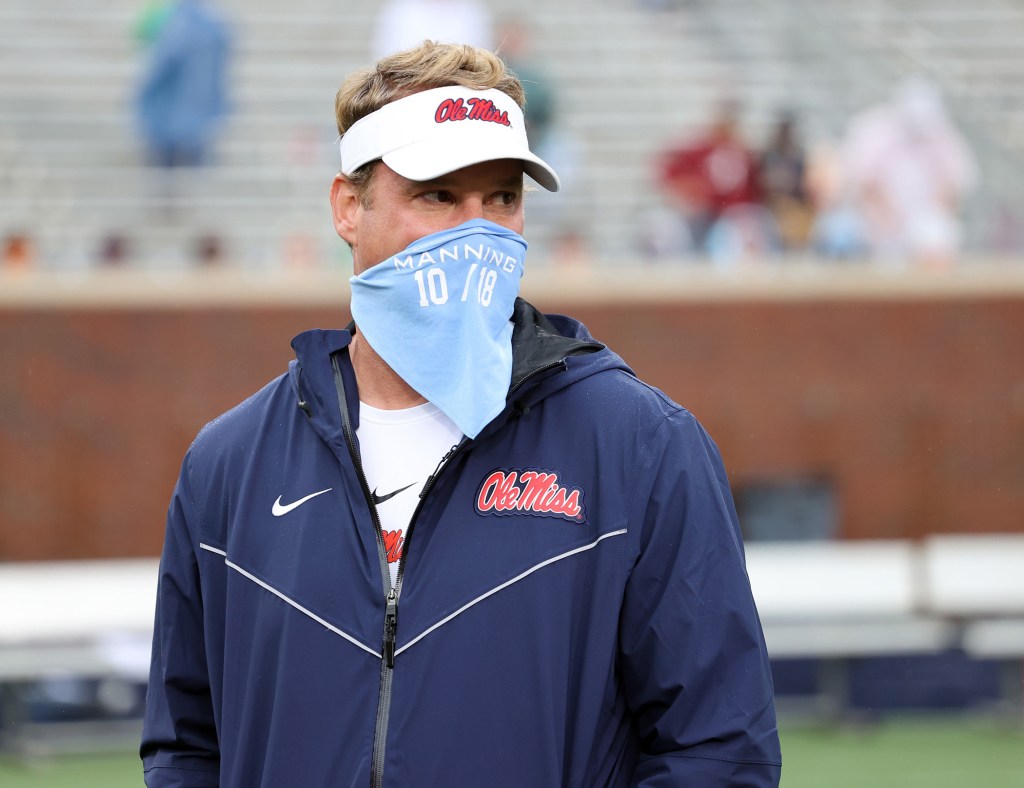 Ole Miss head football Lane Kiffin ahead of the Rebels’ game against Alabama on October 10th, 2020 at Vaught-Hemingway Stadium. The Rebels’ roster could be the thinnest it has been all season when they play No. 7 Indiana on Saturday in the Outback Bowl. (Joshua McCoy/Ole Miss Athletics)

Lane Kiffin is adamant that Ole Miss will play in its first bowl game in five years this Saturday.

What the Rebels’ roster looks like when they arrive in Tampa later this week is still to be determined. The first-year head coach stated on Monday that there are still players who are considering opting out of the final game of the 2020 season.

Along with possibly more players opting out, the Rebels’ depth could take a hit due to COVID-19 and injury issues. Despite those challenges, the option to not play No. 7 Indiana in the Outback Bowl has never been put on the table.

“We’re really struggling via injuries, opt-outs, COVID, especially offense,” Kiffin said during his Monday media availability. “We’re kind of running out of players, which is not ideal when you’re a tempo offense. But it is what it is. …We’ve not talked about not playing. We just want to play and be a part of a bowl game after this long of not being in one. We’ve not even discussed (not playing).”

During the season, the defensive side of the ball was hit hard with positive COVID-19 tests and subsequent quarantining of other players due to contact tracing. The latest roster woes seemingly are on the offensive side, according to Kiffin.

The Rebels (4-5) are already without their two top players on offense with receiver Elijah Moore and tight end Kenny Yeboah choosing to opt out and put all their focus on next spring’s NFL Draft ahead of the regular season finale at LSU.

Kiffin did not disclose which players, specifically, were still considering not playing on Saturday. He is expected to talk to those players further on Tuesday when they resume the team’s final practices of the season.

“We actually have a few guys up in the air,” Kiffin said. “Some that have taken some time off here at Christmas. We start back (on Tuesday) and we’re going to have an answer of where they’re at. This is just where we are. We’re recruiting our own players to play in a bowl game that they’ve never played in. So, it is what it is.”

Running back Jerrion Ealy was injured toward the end of the LSU game. Ealy would not have been able to play if there had been a game last week, according to Kiffin. He is anticipated to try and go during practice this week in hopes of taking the field Saturday.