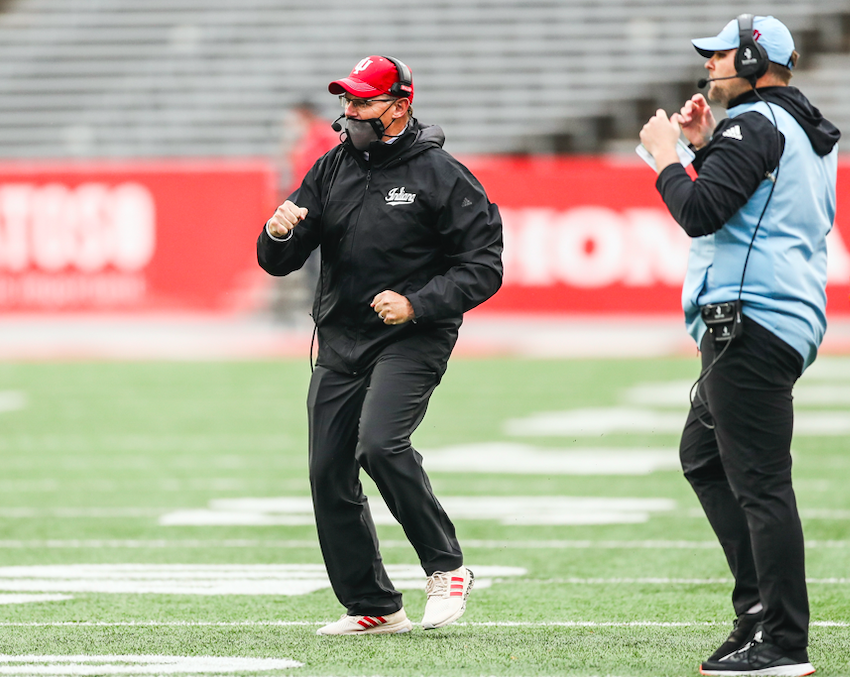 The Outback Bowl brings about several story lines between Ole Miss and Indiana, but the biggest one may revolve around the coaching staff.

The No. 7 Hoosiers have several connections to the Rebels, starting with head coach Tom Allen, who spent a couple years in Oxford. Allen coached the linebackers and was the special teams coordinator under Hugh Freeze from 2012 to 2014.

Allen was hired to become Indiana’s defensive coordinator in January 2016. By December of that year, Allen was named the new head coach, replacing Kevin Wilson, who was fired after that season.

From there, Allen’s Indiana coaching tree has strong roots to Ole Miss, including former Rebel standout and wide receivers coach Grant Heard. Saturday’s game in Tampa will put Heard on the opposite sideline from his alma mater for the first time.

Heard played at Ole Miss from 1996 to 2000 and played in four bowl games with the Rebels. Heard was the school’s all-time leader in receptions and touchdown catches when he graduated from Ole Miss. Those records are no longer standing, broken by several receivers recruited by Heard himself in A.J. Brown and DK Metcalf.

Coaching under Freeze from 2012 to 2016, Heard spent five seasons in Oxford before eventually finding his way to Bloomington to work on Allen’s staff.

“I was fortunate to get to go play at Ole Miss, and then even more fortunate to get to go back and coach,” Heard said. “My brother (former Ole Miss player Ronnie Heard) still lives there with his family. I met my wife there. Just a lot of great memories, bunch of great friends there. I wouldn’t change it for the world. I’m excited to get to go out there and play another football game, it just happens to be it’s against Ole Miss.”

The Hoosier-Rebel connections do not end with Heard. Another familiar name to Ole Miss fans includes Indiana safeties coach Jason Jones, who was hired by Allen on Jan. 19. Jones worked on Freeze’s staff from 2013 to 2016, serving as secondary coach and co-defensive coordinator.

Jones also worked under Dave Wommack, who was the defensive coordinator at Ole Miss from 2012 to 2016. Wommack retired at the conclusion of the 2016 season. Jones continues to work with a Wommack at Indiana: this time it is Dave’s son Kane, who is the Hoosiers’ defensive coordinator.

Saturday’s game will be Wommack’s last with Indiana, as he took the head coaching job at South Alabama earlier this month.

“Just being there at Ole Miss, I know the team,” Jones said. “It’s a team full of great athletes. They love to play the game. They’re going to play hard. When we line up and play on January 2, they’re going to give it 110 percent. We’re going to get everything that they have. It’s team full of competitors. We’re just excited about it, and we know it’s going to be a good football game.”

Another Ole Miss connection to Indiana’s program does not include a coach, but a player. Star wide receiver, and George County native, Ty Fryfogle, has a deep familial connection to the Rebels. Fryfogle’s father, Trey, was a receiver for the Rebels from 2000 to 2002, catching passes from Eli Manning during his tenure.

Ty Fryfogle was once recruited by Ole Miss but eventually settled on Indiana and playing for Heard.