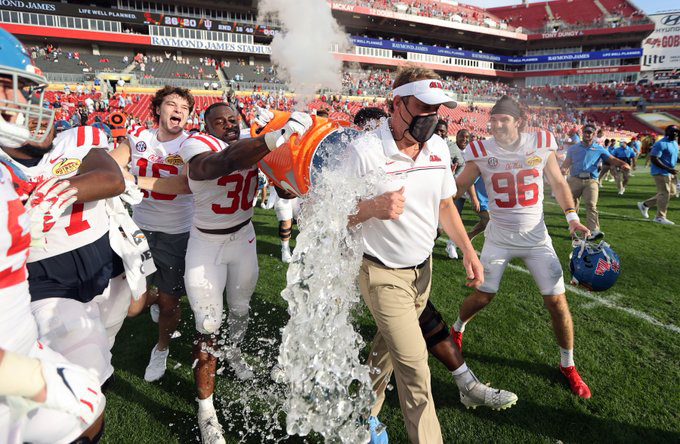 Ole Miss players celebrate with head coach Lane Kiffin after deafeating No. 7 Indiana, 26-20 to win the 2021 Outback Bowl on Saturday, January 2, 2021. The Rebels played in, and won, their first bowl game since the 2016 Sugar Bowl. (Joshua McCoy/Ole Miss Athletics)

In what served as a preview of the 2021 team, the Rebels defeated No. 7 Indiana, 26-20, in the Outback Bowl at Raymond James Stadium on Saturday. The win was the first bowl victory since the 2016 Sugar Bowl, which was also the last bowl appearance for Ole Miss prior to this year.

The Rebels offense had a lot of unfamiliar faces and unorthodox looks to it due to opt-outs and injuries late in the season. Without Elijah Moore, Kenny Yeboah, Jerrion Ealy and Braylon Sanders, quarterback Matt Corral was throwing to a few unusual suspects.

The biggest throw came during the Rebels’ final drive of the game, when Corral hit John Rhys Plumlee for 44 yards, setting up the game-winning touchdown reception by Dontario Drummond two plays later with just over four minutes remaining.

Plumlee served as a slot receiver on Saturday, helping fill the void left by Moore’s absence. The quarterback finished with five catches for 76 yards.

“We were down receivers, I think we were down to four scholarship receivers,” said Ole Miss head coach Lane Kiffin. “For a guy to play only one week at receiver, a remarkable kid to come in and do that. You just can’t do that. This isn’t pop warner. We’re in major college football playing a top 10 team and you play receiver for one week and make plays is special.”

Sophomore Jadon Jackson and junior tight end Chase Rogers were also part of an offense by committee for Ole Miss that saw above average playing time. Jackson recorded the first catch of the game, finishing with four for 38 yards while Rogers had three catches for 18 yards.

Saving one of their better performances for last, the Ole Miss defense stood tall against Indiana and quarterback Jack Tuttle in the final minutes. The Hoosiers (6-2) got to the Rebels’ 33 with just over a minute remaining and then went backwards 18 yards the ensuing plays. Tuttle’s pass on 4th and 18 fell incomplete, sealing the Rebels’ win.

Ole Miss (5-5) held Indiana to 369 yards and two touchdowns. Whop Philyor had a record day for Indiana with 18 catches for 81 yards, setting a new Outback Bowl record for receptions.

Junior Otis Reese made the biggest defensive play of the game, picking off Tuttle late in the second half. Reese finished with nine tackles and Jacquez Jones led the team with 13 tackles.

The defense was also without a player with Lakia Henry not being available on Saturday.

“Really happy (with the defense),” Kiffin said. “We talked about all week we’re going to need that. We’re not going to go score 60 points. We just can’t do that without all those weapons versus a team that check people down. …We knew it was going to be a struggle and it was great to see the defense play like they did.”

Corral finished with 346 yards and two touchdowns, earning Outback Bowl Most Valuable Player honors. The redshirt sophomore was more patient, taking what Indiana’s defense gave him and making reads to his check down routes as opposed to forcing the ball down field any small windows.