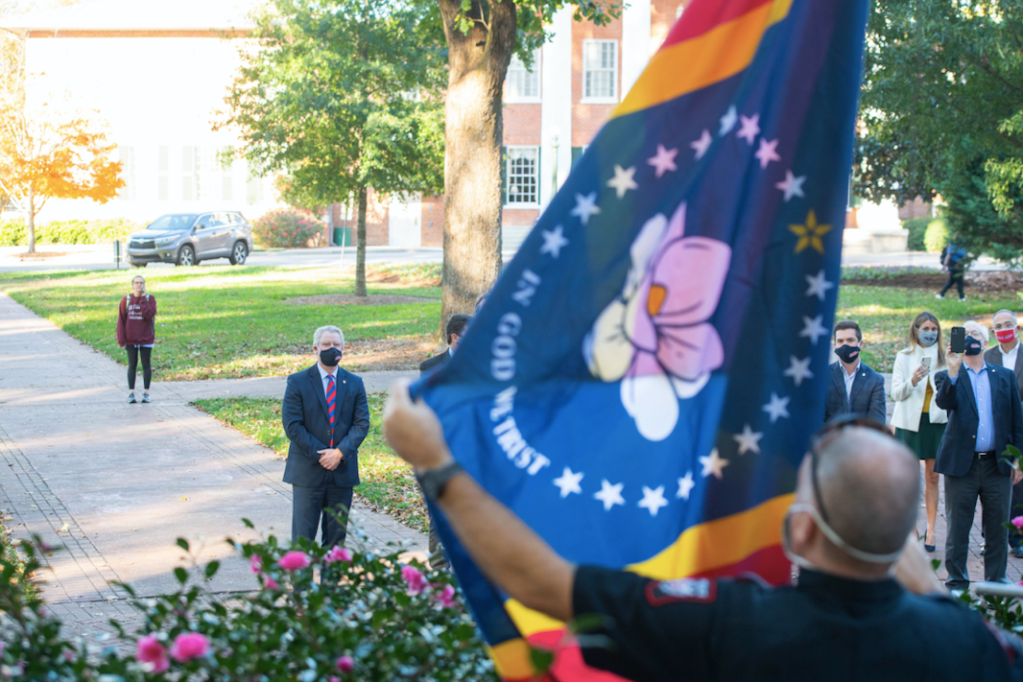 Chancellor Glenn Boyce and Ole Miss’ senior leadership watch as the new Mississippi state flag is flown for the first time over the Circle. Photo by Kevin Bain/The University of Mississippi Marketing Communications

Editor’s Note: This is the final installment of our four-part series, taking a look back at some of the most notable stories of 2020.

The year nobody saw coming finally came to a close with a historic firsts for Mississippi, another run at a second straight state championship and a holiday season that was anything but normal.

A FLAG FOR ALL

In July, the former state flag, which included Confederate symbols, was repealed and taken down after flying for over 120 years. The new design, which included a white magnolia blossom and the phrase “In God We Trust,” which was a requirement by the Mississippi Legislature’s bill, received a large majority of the vote.

A flag committee of nine members was formed, including Oxford Mayor Robyn Tannehill, that met over the summer to decide on the design that was placed on November’s ballot.

The push to change the flag included efforts from student-athletes and coaches from across the state, which came within a week before the Mississippi Congress passed the historic bill.

The first Tuesday of the month saw long lines at all of the voting precincts in the early hours of the day. The lines only grew longer in some polling locations throughout the day with people waiting nearly two hours at times.

When the ballots were counted, over 70 percent of registered voters in Lafayette County cast their vote. The large turnout sparked conversation of potentially moving a polling location that saw long lines wind down a street towards the highway.

Another historic moment for Mississippi occurred in November when Aysa Branch was named Miss USA.

Branch, an Ole Miss alum and Booneville native, was the first Miss USA to hail from Mississippi. The 22-year-old had already made history when she became the first African-American to be crowned Miss Mississippi.

The COVID-19 pandemic altered many parts of everyday living in 2020, but the most notably may have been how families spent the holidays.

Normal holiday traditions were not able to be held due to gatherings not being allowed due to COVID-19 restrictions. Because of it, Halloween saw people adapt to the new normal with how they did trick-or-treat. Trunk or treat events were held in several Oxford locations in lieu of children going door-to-door asking for candy.

The Christmas season saw an Oxford tradition canceled altogether. The annual Christmas Parade was shifted to more of a drive-thru format where people would drive by the floats at mTrade Park instead of the floats driving by them.

As the annual December event was getting closer, organizers made the call to cancel the event due to a low number of participants.

After winning their first state championship in football last year, the Oxford Chargers followed it up with another run at a Class 6A crown.

The 2020 high school football season was one where teams canceled games due to COVID-19, but the Chargers managed to get all of their scheduled games in.

Not only did Oxford play all of their games, they had a perfect regular season. Some of the wins included comeback victories, which became a staple of the Chargers’ season.

Oxford had a shot at their first perfect season when they made it back to the state championship game in a high anticipated rematch against Oak Grove. The Chargers came up just short, but put together one of the more impressive seasons in recent memory.