“We still have a lot of work to do:” Oxford Mayor Robyn Tannehill announces re-election bid 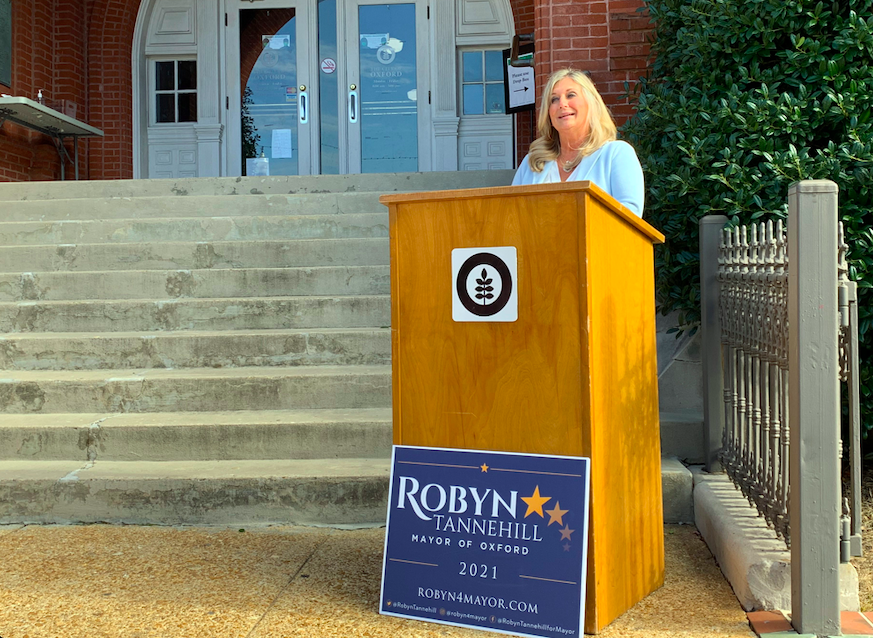 Oxford Mayor Robyn Tannehill announces her bid for re-election outside Oxford City Hall on Monday, January 4, 2020. Tannehill is running as an Independent in the 2021 election after spending much of her political career as a Democrat. (Jake Thompson/Oxford Eagle)

Mayor Robyn Tannehill is still in her first four-year term, but said she feels Oxford has more to accomplish under her administration.

Monday, Tannehill made public her decision to run for re-election with an announcement in front of City Hall with family and friends there in support.

“My administration has accomplished many things during our first term, but we still have a lot of work to do,” Tannehill said. “We have laid the groundwork for some exciting projects that I want to see through.”

The Highway 7 and University Avenue interchange project, upgrading city buildings and the city pool were some of the projects Tannehill mentioned she wants to see completed in her next four years, if re-elected.

In 2017, Tannehill ran as a member of the Democratic Party, but announced on Monday she will run for a second term as an Independent candidate. Tannehill previously served on the Oxford Board of Aldermen as a Democrat.

When it comes to municipal issues, Tannehill said she does not see political affiliation as a major factor when looking to resolve those matters, leading to her decision to run as neither a Republican nor Democrat.

“I believe with all of my heart that at the local level we need to be as bipartisan as possible to be able to achieve our greatest potential,” Tannehill. “I’m not representing the Republican Party or Democratic Party as Mayor. I’m representing Oxford, Mississippi. Garbage pickup, potholes, clean water, fire protection, police protection. Those aren’t Democrat or Republican issues. If we tune out politics and the rhetoric we hear on the national news, our neighbors are just that. They’re our neighbors.”

With Tannehill’s decision to run as an Independent, it brings about the possibility of a three-person race in June’s general election. As of Monday afternoon, Tannehill was the only candidate who had officially filed and qualified for the election, which she did at 8 a.m. on Monday.

The final two years of Tannehill’s first term included seeing an Oxford police officer indicted on a capital murder charge. The officer is accused of murdering Dominique Clayton in her home while she was sleeping in May 2019.

Tannehill’s final full year saw the COVID-19 pandemic, and with it, the responsibility of guiding a city through one of the worst health crises in the last century. As Mayor, she made the decision to furlough city employees for three months as a means of absorbing the financial blow the pandemic would give to loss of tax revenues.

With the major events transpiring in the last two and a half years of her term, Tannehill said her decision to seek re-election did not waiver because of those factors.

“The pandemic has thrown us curve balls that no one could have seen coming, for sure,” Tannehill said. “The pandemic brought out the worst in some things, but it also brought out the best in our community. We have seen our community rally together. … It probably made my decision to run again easier, because there’s so much to still do. We’ve got to recover from this pandemic and we’ve got to rebuild.”

A handful of incumbents and three newcomers filed on for re-election in Oxford’s Aldermen races.

Erin Smith, executive director for Court Appointed Special Advocates (CASA) of Lafayette County, filed to run for the Ward I Alderman seat. Incumbent Rick Addy had not filed paperwork as of Tuesday afternoon.

In the Ward III race, Lachlan McQueen Miscamble filed and will challenge incumbent Janice Antonow if she chooses to seek re-election. As of Tuesday afternoon, Antonow had not filed any paperwork.

Taylor will be in a primary after Justin Boyd filed to challenge him as a Democratic candidate.

The deadline to file is Feb. 5. If any primaries are needed, they will take place on April 6 with runoffs on April 27. The general election will take place on June 8. An up-to-date list of candidates will be included in Wednesday’s edition of the EAGLE.