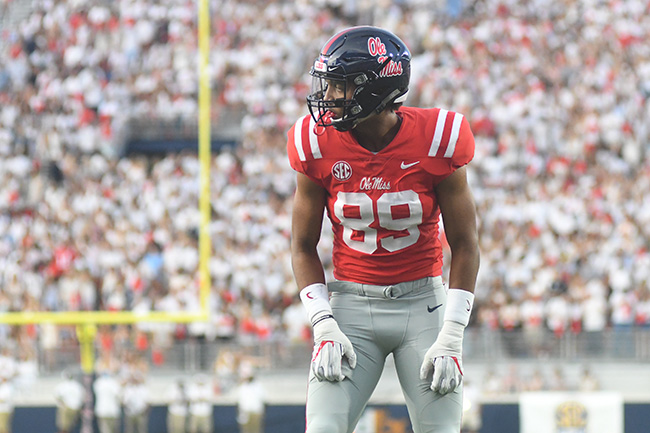 Now that the 2020 football season is officially in the books, Ole Miss players have begun revealing their plans for 2021.

This season did not count against players’ eligibility due the COVID-19 pandemic, with the NCAA granting eligibility waivers for next season and allowing seniors the chance to return if they so choose.

Some Rebels have made their intentions known already, including Elijah Moore, who opted out of the final two games of this season and is leaving for the NFL. Another player announced on Monday that he will play college football in 2021, but at another school.

Defensive end Ryder Anderson announced his intention to be a graduate transfer and enter the transfer portal. Anderson made the decision via his Twitter account.

“University of Mississippi, Oxford, coaches and teammates, I thank you,” Anderson’s post read. “I can’t express all of my words here but you will forever be apart of me. I’m excited to see what God has in store for me. I will be grad transferring for my final year of eligibility.”

University of Mississippi, Oxford, coaches and teammates, I thank you. I can’t express all of my words here but you will forever be apart of me. I’m excited to see what God has in store for me 🤞🏽❤️
I will be grad transferring for my final year of eligibility. pic.twitter.com/Kt1NobRN07

While Ole Miss will be without a seasoned starter on the defensive line next season, they will have continuity in the defensive backfield. On Tuesday, Jaylon Jones tweeted he will be returning for a sixth season with the Rebels. Midway through this season, Jones, who was the 2020 Chucky Mullins Courage Award winner, suffered his second season-ending injury in three years.

Jones made the announcement with a simple “2021…” along with a graphic that states “Not Done Yet.” Sam Williams announced his intentions of returning to the Rebel defense next season with a tweet reading “Unfinished Business……”

Tariqious Tisdale will also return to the Ole Miss defense after suffering a season-ending injury in the Egg Bowl against Mississippi State.

The Rebel offense has players returning, including wide Receiver Braylon Sanders. Sanders made a similar announcement on Monday, tweeting “Ima turn it up a lil more this time #Big Blessings” with the same graphic as Jones. With Sanders returning, it adds stability to a receivers room that will include Jonathan Mingo and Dontario Drummond with game experience.

Prior to last weekend’s Outback Bowl, Ole Miss head coach Lane Kiffin felt confident that most of his seniors would take advantage of the waiver and return to Oxford for one final season. Kiffin started meeting with his seniors roughly four weeks ago to gauge their temperature on returning or leaving the program.

Ole Miss ended their season at 5-5 after defeating No. 7 Indiana, 26-20, in the Outback Bowl last Saturday in Tampa.