Local, State officials respond to siege of US Capitol building 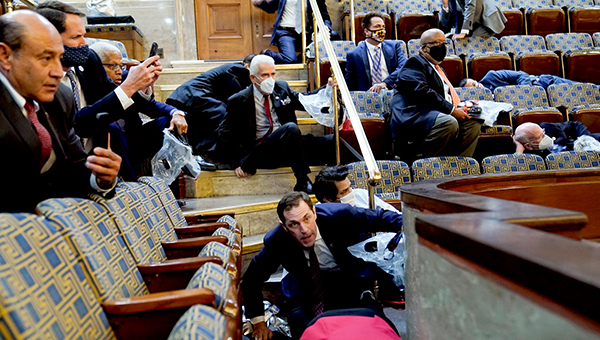 Members of Congress, including U.S. Rep. Bennie Thompson (D-Miss.), sitting on the left, shelter in the House gallery as protestors try to break into the House Chamber at the US Capitol Wednesday. (AP Photo/Andrew Harnik)

What started out as a day where the U.S. Senate was set to certify the results of the 2020 Presidential election ended with the U.S. Capitol Building under siege.

A rally for President Donald Trump and a protest toward the electoral votes being certified was just hundreds of feet away.

Around midday on Wednesday, Vice President Mike Pence issued a letter stating he would not interfere in the Senate’s vote. Shortly after that, a group gathered in front of the Capitol steps and made their way past security barricades and eventually into the building itself.

According to Washington, D.C. Police Chief Robert J. Contee, the protest was officially declared a riot at this point.

What transpired after was a mob running rampant in the halls, forcing the Senate and House chambers to be locked down and eventually evacuated while images of Capitol security barricaded the doors and drawing their weapons on those trying to get inside.

Some managed to get inside the Senate Chamber and gallery, sitting in the seat reserved for the Vice President.

Mississippi U.S. Sen. Roger Wicker was one Republican lawmaker who voiced his support of voting in favor of certifying the election results, though also expressing his disappointment in the outcome.

“Our campaign lost a close election, and it is time to acknowledge that,” Wicker’s statement read.

Wicker was one of many Senators escorted out of the chamber to a safe location, tweeting hours after the siege began that he was safe.

“I thank the brave men and women of the U.S. Capitol Police and federal law enforcement for their work to bring the lawlessness and violence in the Capitol building to an end,” Wicker’s tweet read.

During the siege, other local and state officials commented on what they were witnessing transpire in Washington, D.C. and for the violence to end.

“Watching the scene at the Capitol is terrifying and so incredibly sad,” Oxford Mayor Robyn Tannehill’s tweet read. “America is better than this. Violence cannot be the answer. God, please protect our country. Colossians 3:15.”

U.S. Senator Cindy Hyde-Smith tweeted she and her staff were safe late Wednesday afternoon. The Republican senator also reiterated the need to stop turning to violence regarding the outcome of the election.

“Whatever frustrations any American may have, violence & destruction in the US Capitol, the seat of our democratic government, is unacceptable. I’m grateful for @CapitolPolice & those working to stabalize the situation,” Smith’s tweet read.

Mississippi District 1 US Representative Trent Kelly also asked for the violence to end, condemning the acts.

It is unclear if the US Senate will reconvene to continue the process of certifying the election results on Wednesday evening or not.