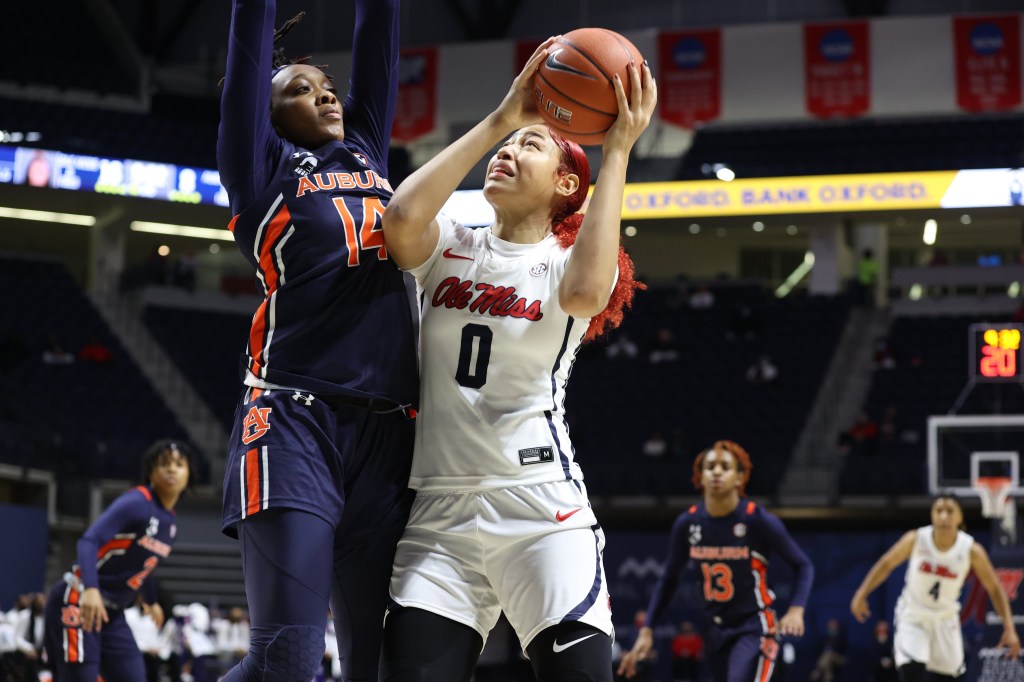 Ole Miss forward Shakira Austin (0) attempts a shot against Auburn at The Pavilion on Thursday, January 7, 2021. The Rebels won 62-58 for their first SEC victory since February 14, 2019. (Joshua McCoy/Ole Miss Athletics)

Nothing comes easy, including winning a conference basketball game for the first time in nearly two years.

Moments after the final buzzer sounded and the scoreboard showed the Ole Miss women knocked off Auburn, 62-58, for their first Southeastern Conference win since Valentine’s Day 2019, the players were still in disbelief.

The Rebels secured their first SEC win of the season, snapping a string of 23 straight conference losses including two SEC Tournament games.

“When we won they knew they didn’t play their best and so they almost had the nerve to put their head down,” said Ole Miss coach Yolett McPhee-McCuin. “I had to give them a history less. We haven’t won since February 2019. I got PTSD about it. For us to figure out a way to win a conference game after losing a game in the fashion that we did on Monday shows tremendous about of growth.”

With a limited lineup for a second straight game due to players still out due to COVID-19 protocols, the Rebels (7-1, 1-1 SEC) relied heavily on rotations and substitutions.

Freshman forward Madison Scott was one of the Rebels out for the second straight game, but Shakira Austion helped pick up the slack. The junior transfer scored a game-high 25 points in just her second SEC game. Austin also led the team in rebounds with 10.

The former Maryland Terrapin is still adjusting to SEC play, but is finding her way game-by-game.

“There’s definitely a difference,” Austin said. “I haven’t been able to play too much (against) a big, bang post player to give me a lot of physical contact. But I’ve heard about the SEC being a lot more aggressive and I’ve definitely been getting beat up a little bit. I was still feeling the same way in the Big 10, but I’m pretty sure down the road further into conference (play) I’ll be able to respond with a different attitude.”

Another trait the Rebels are learning to add to the team’s character is the ability to finish out games. They let Monday’s conference opener against LSU slip away in the final minutes of regulation and ultimately losing in overtime.

On Thursday, the Rebels learned from past mistakes and were able to hold the lead wire-to-wire. The Rebels led by as much as 12 at one point, but Auburn (5-6, 0-3) would close the deficit several times and get to within as many as two points late in the game.

Every time Auburn rallied, the Rebels did not fold and relinquish the lead and would answer with runs of their own.

“I know that we haven’t won a conference game since a long time ago,” McCuin said. “We have been working towards building something where we could find ways to get wins. I know that this probably wasn’t the prettiest game, but I tell you this. This is going to help us tremendously. …We found a way to win and that means a lot for a young team.”

Reigning SEC Freshman of the Week Snudda Collins finished with nine points for the Rebels while Donnetta Johnson and Valerie Nesbitt each scored 7 points.

Ole Miss returns to action on Sunday when they travel to Starkville to play No. 14 Mississippi State. Tipoff is set for 5 p.m. CT and the game will air on SEC Network.