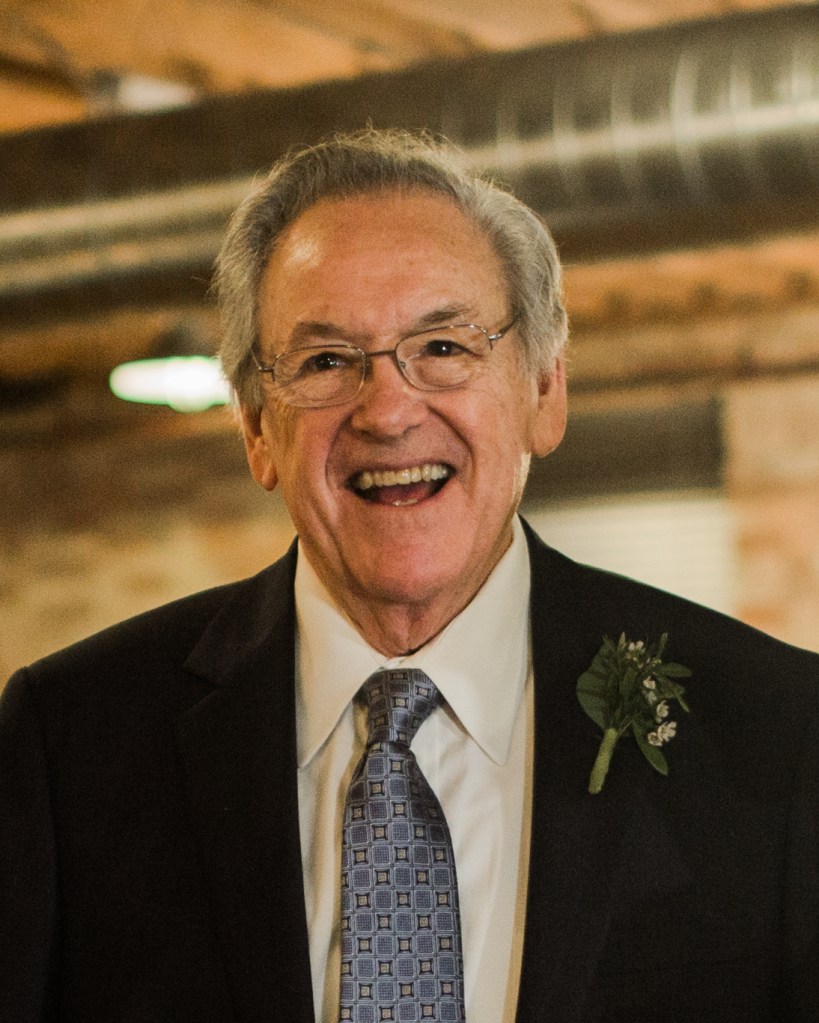 Bob was born March 7, 1935, at Johns Hopkins in Baltimore where his father completed a Master of Public Health before moving to Oxford. Bob attended University High School where Freda Wallace, a pretty majorette, caught his eye and became his sweetheart of 65 years. The two married at First Baptist in Oxford on Aug. 12, 1956.

Bob knew by 13 he wanted to become an architect, after a brief attempt trying to watch his physician father perform medicine. He began his studies at the University of Mississippi and finished his Bachelor of Architecture in New Orleans at Tulane University in 1959 (there was no architecture school in Mississippi at the time). On graduation day, he was also commissioned as Second Lieutenant in the U.S. Army Reserve, and served eight years, completing service at the rank of Captain.

Bob’s career began in Memphis in 1960 before his move to Jackson in 1962. He joined with two partners in 1965 to form Jernigan Hawkins and Harrison Architects & Engineer (today known as JH&H Architects). In 1968, Bob helped create a corporation to build healthcare facilities that grew to become the eighth largest in the country, designing 50 facilities across the South.

At 40 and with three children, Bob completed his Master of Architecture at the University of Florida, and nine years later his MBA from Tulane.

Upon receiving his license in 1965, Bob became a member of the American Institute of Architects (AIA), and went on to serve as state president, regional director, national board of directors, and was awarded the AIA lifetime achievement award in 2013. In 1966, Bob helped found the state chapter of the Construction Specification Institute (CSI) and would serve as its president before being awarded the J. Norman Hunter Memorial Award for contributions to education. He remains among only a few professionals to hold the distinguished rank of Fellow of both organizations.

Bob selflessly served the industry he loved for nearly 40 years as practitioner, regulator and educator, serving on the State Board of Architecture, the National Council of Architecture Registration Boards (NCARB) and the National Architectural Accrediting Board (NAAB), which set criteria and accredited all schools of architecture. He also developed an Intern Architect Program (IDP) to fulfill the three-year requirement for all young architects between education and examination that is now mandatory for architectural registration in all 50 states.

Wanting to give back to his state while promoting his profession, Bob was instrumental in establishing Mississippi State University’s School of Architecture. He served for 13 years as faculty member, and more than two decades on the school’s advisory council. His and Freda’s continuing support of the MSU architecture program includes permanent endowment of a lecture series, gifts for scholarships and facilities in both architecture and landscape architecture, including the Robert and Freda Harrison Auditorium in the College of Architecture, Art and Design. In 2013, MSU awarded Bob an honorary doctorate of science for his commitment to the fields of education and architecture.

Bob’s more than 50 years of community service includes three different institutions of higher learning, as well as numerous church, civic and community organizations such as Willowood Developmental Center, United Methodist Senior Services, Jackson Symphony, Kiwanis and Mississippi Museum of Art, just to name a few. He also funded musical instruments and scholarships for high school students to pursue their talents. In fact, after his mother bought Bob his first clarinet when he was 7, he developed a lifelong love of music, playing in the University High School band, the Mississippi All-State Lions Band and even the “dance” band while at Ole Miss. After not playing for more than 60 years, Bob refurbished that same clarinet and joined the Mississippi Community Symphonic Band, playing his final concert on his 85th birthday just months ago. His bandmates brought him much joy, but never as much as listening to his grandchildren play piano, and especially playing duets with his grandson at family gatherings.

Visitation will be held Friday, Jan. 8 from 3 to 5 p.m., and services Saturday, Jan. 9, 11 a.m., both at St. Matthews United Methodist Church in Madison. The family and church request masks and social distancing. Burial will follow at Parkway Memorial Cemetery. In lieu of flowers, donations may be made to St. Matthews, 7427 Old Canton Rd, Madison, MS, 39110, or the Mississippi Community Symphonic Band Instrument Donation Program at www.mcsb.us.

The service will be livestreamed @ www.stm-umc.org/live.