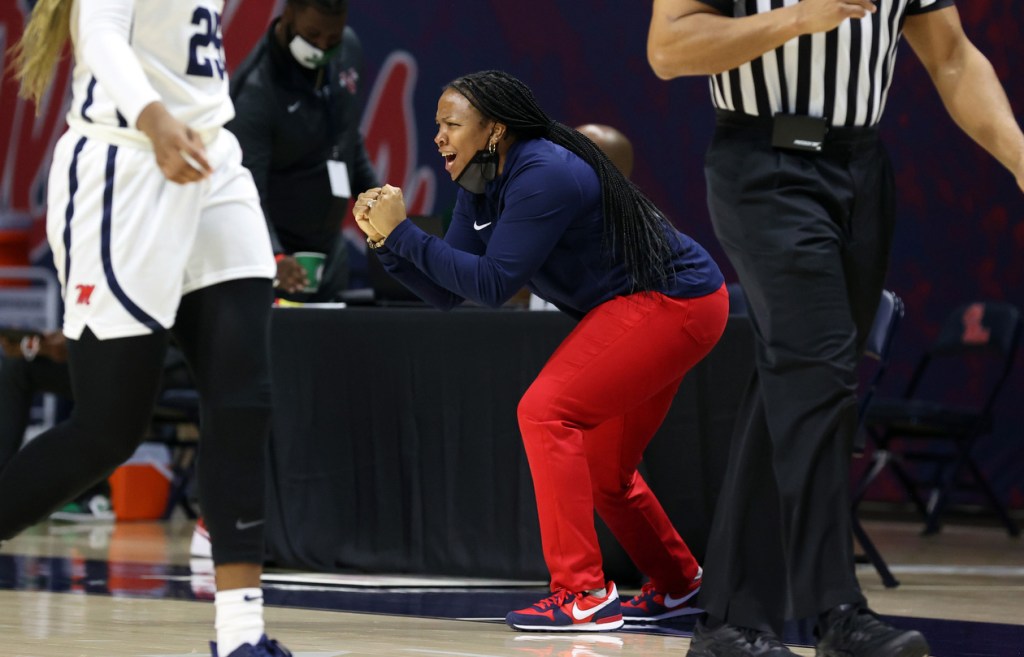 Yolett McPhee-McCuin is thrilled to be playing a ranked opponent for the first time this season on Sunday.

The Ole Miss women’s basketball head coach did not care who the opponent is, but it so happens to be their in-state rival No. 14 Mississippi State.

The Rebels (7-1, 1-1 Southeastern Conference) are riding high after Thursday’s win over Auburn, snapping a near tw0-year winless drought in conference play. Their record through their first eight games is also the program’s best start under McCuin, who is in her third year at Ole Miss.

With all the excitement that came following the win, the Rebels have put that game to bed and have since turned their focus to the Bulldogs (7-2, 2-1), who are once again one of the nation’s top teams.

“I’m really excited to test our ladies and see how we handle it,” McCuin said of Sunday’s matchup. “I think rivalries are in large part made for fans. It’s not so much as far as teams are concerned because at the end of the day I didn’t care who we played next. We have to show growth. It just so happens it’s Mississippi State. Now, we respect it and my players understand what this game means to the community. …All of us, we understand what it means, but our goal is just to get better.”

Depth and availability has been an issue on the Rebels’ roster the past two games. In their SEC opener against LSU last Monday, McCuin had eight players available due to others being out due to COVID-19 protocols.

Against the Bulldogs on Sunday, the roster should be close to full but McCuin would not divulge which players would be returning that have missed their last two game.

One key player that has been glaringly absent from the court is freshman forward Madison Scott. The Indian Head, Md. native is one of the players who have sat out the two games this past week, McCuin hinted that Scott could be available for Sunday’s game following the Auburn win, but gave little information beyond that.

In her first six games as a Rebel, Scott is averaging 12.2 points and 7.9 rebounds per game. The difference with Scott on the floor compared to without is noticeable to McCuin.

“Maddie just brings an incredible amount of energy and intensity,” McCuin said. “As far as stat sheets are concerned, the rebounding, she’s long. Even though she’s only (6-foot-2), her wingspan is incredible. So she gets her hands on balls. And you know what it did? It made us uncomfortable (without Scott) because my starting lineup had been the same. So, there was a comfort that everybody was learning to have with her on the floor. …All she knows how to do is win and she brought that on the floor and we missed that.”

Sunday’s game is also the first in the rivalry series between McCuin and first-year Mississippi State head coach Nikki McCray-Penson. The game will be the first time the two square off as coaches on opposing sidelines, but the pair’s friendship goes back years.

When Penson was an assistant coach at South Carolina, McCuin would come up and watch practices during her time as coach at Jacksonville State. From there the two grew a bond that has lasted and made them and their families dear friends.

Despite this being Penson’s first year in the SEC ranks, she has been aware of what McCuin has been doing in her first two and a half seasons at Ole Miss, rebuilding the program.

“I think anytime there’s a rivalry game, that’s all null and void,” Penson told local media this week. “You just have to come out and play. It’s the battle of the states. I know Yo, I support her and her family. She’s a dear friend of mine. She’s done a great job of recruiting. She’s a hell of a recruiter. Her coaching staff has done a great job and they’ve gotten some transfers. That’s what you’re supposed to do. You want to get your type of players in there and that’s what she has done to be able to compete night-in and night-out at the SEC level.”

Ole Miss and Mississippi State tip off in Starkville on Sunday at 5 p.m. CT. The game will air on the SEC Network.