Highway 7 and 9 roundabout project to resume this Spring 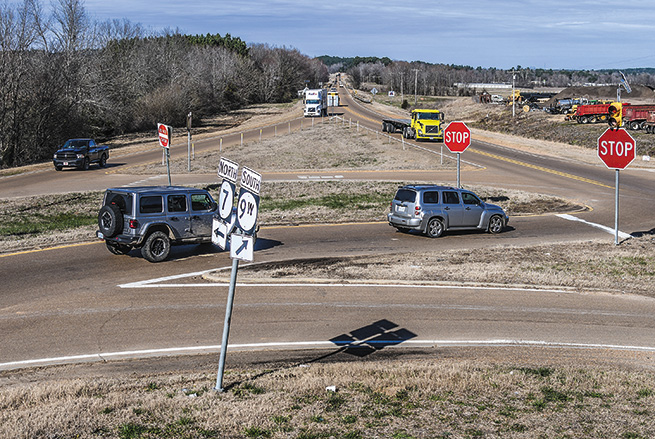 Construction of a new roundabout at the Highway 7 and Highway 9 split is expected to resume by Spring 2021.

During a visit at Oxford’s City Hall, Mississippi Department of Transportation Northern Commissioner John Caldwell stated the project to improve that area of Highway 7 will begin in March.

A roundabout has been planned for the split for two years, and MDOT was anticipated to begin construction in second half of 2019, but following feedback from residents of Lafayette and Yalobusha Counties, along with businesses in the area of the intersection, the agency decided to hold off on the $2.8 million project.

MDOT then announced they would begin accepting bids for the project last November. With the COVID-19 pandemic hitting Mississippi in 2020, the roundabout was one of several projects to be placed on hold.

Another project that has been on the minds of Oxford residents is the widening of Highway 7 from Belk Boulevard to Highway 9. The project has been in talks for close to a decade, with lack of funding being the main issue for its stalling out in recent years.

Caldwell provided an update on that project as well.

“It’s one that’s further along than most projects,” Caldwell said. “There’s some utilities that still need to be moved, and then we can go to contracting. It’s getting real close, in highway terms. Nobody is going to be driving on it (with four lanes) in the next couple of years. But at the same time you might see some dirt starting to move in the next four years.”

Caldwell was in Oxford on Thursday to meet with local officials from all seven counties that Highway 7 runs through. Starting in Belzoni and running up to the Tennessee state line in Benton County, the highway is an artery of North Mississippi that needs much attention.

The meeting, which took place in City Hall with others attending virtually, was about forming a coalition that will devise a master plan of projects needed along Highway 7 to then take to Jackson and Washington, D.C. in hopes for more funding. Caldwell informed those in attendance to think big picture, as legislators tend to listen to bigger projects than smaller ones.

“(Highway) 7 is a key highway, and sometimes it kind of gets lost in the shuffle of all the other highways,” Caldwell said. “That’s why we’re here today, is to make sure we pull it out and get it the right kind of attention that it needs. It’s important for a lot of different ways. Safety’s always on the top of everybody’s list, but it’s a unique corridor.”

The meeting concluded with a committee being formed to come up with a name, or a brand, for the coalition and write a joint statement to be presented to state and federal lawmakers in the near future. Oxford Mayor Robyn Tannehill volunteered to be one of the members on the committee.