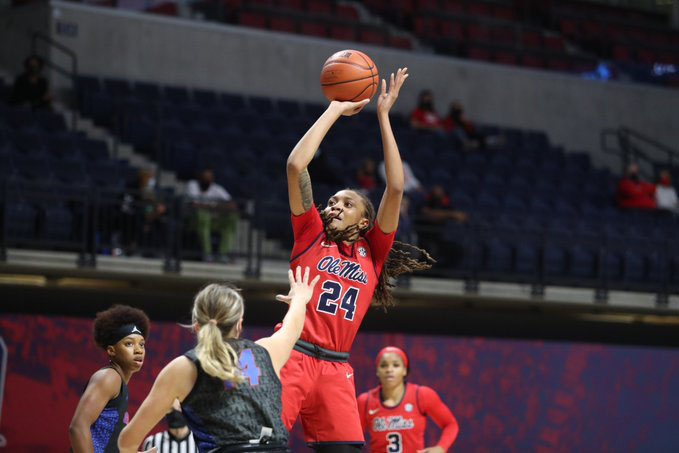 Two weeks ago in Starkville feels like a season ago.

The Rebels fell short in their upset bid to defeat the then-No. 14 Mississippi State, but there was optimism that the program that has floundered for over a decade was seeing the early beginnings of a turnaround.

Since that Jan. 10 night, Ole Miss has suffered three more losses, including Sunday’s 78-68 home defeat at the hands of another struggling team in Florida.

Coming out of halftime with a four-point lead, Ole Miss (7-5, 1-5 Southeastern Conference) saw Florida make adjustments and start the third quarter on a 10-0 run while the Rebels missed their first five shots.

Florida (9-6, 2-5) heated up from behind the arc, hitting six of their eight three-pointers in the second half and four of them in the opening minutes of the third quarter.

Turnovers were an issue for the Rebels, giving away the ball 10 times with Florida scoring 15 points off of them. The turnovers allowed the Gators to score 10 fast break points as well.

“We talked about how the first three minutes (of the third quarter) were going to be crucial,” McCuin said. “Either we can continue to build on the lead or we’re going to get smacked in the face. We got smacked in the face and as soon as we did our youth started to show. Pouting and just being immature in our response. We have to learn how to fight through adverse moments.”

One advantage the Rebels had over Florida were points scored in the paint. Ole Miss won the offensive battle down low, outscoring the Gators 40-32.

Shakira Austin did not start, but came off the bench and provided a spark, scoring eight points in the second quarter. Florida held the junior to just two points in the second half. The Gators making shots and the Rebels unable to get a rebound in transition hindered Austin’s ability to be effective the final 20 minutes.

“We were letting them score, so we didn’t get a lot of transition baskets,” McCuin said. “I think that hurt us tremendously. We weren’t able to get out in transition and get some easy baskets. So we had to go out and play against a zone defense the majority of the time and just made poor decisions throughout it.”

Ole Miss travels to Knoxville next week for a game against No. 25 Tennessee on Thursday. Tipoff is scheduled for 6 p.m. CT.