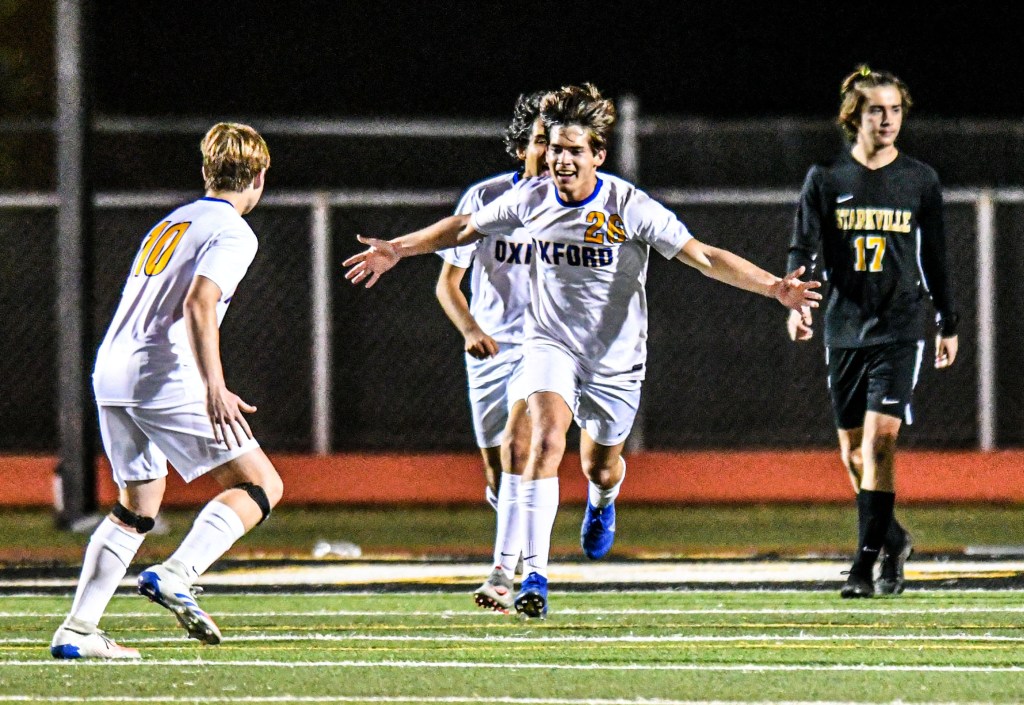 Oxford High’s John West Perry (26) celebrates his goal against Starkville in the first round of the MHSAA Class 6A soccer playoffs at Starkville High School on Tuesday, Jan. 26, 2021. The Chargers won 4-2 in overtime. (©Bruce Newman)

STARKVILLE — For the first time all season Hunter Crane saw what the Oxford boys soccer team could look like at full strength and the rest of Class 6A may want to be on alert.

Oxford defeated Starkville 4-2 in overtime on Tuesday at Starkville High School to advance to the second round of the 6A playoffs.

The match was the first time Crane had a full roster of available players. Whether due to injuries or COVID-19 protocols, the Chargers were never a 100 percent throughout the regular season.

What a healthy Oxford consisted of was a team that took it to Starkville from the opening kickoff. The Chargers were the aggressors early and had plenty of opportunities to take an early lead.

Once halftime came, the Chargers should have been looking at a 3-0 or 4-0 lead, but could never cash in several good looks at the goal in the opening 40 minutes.

“Came out from the opening whistle. That’s what we wanted,” Crane said. “Kind of the same message for the boys tonight that we had for the girls (on Monday). Come out with that intensity and effort. We had lots of opportunities around the net and the ball just wasn’t going in.”

In the first three minutes of the second half, Starkville grabbed the first lead of the match with a goal by Max Buehler.

Oxford answered 18 minutes later with a goal by Joel Sandoval to tie the match at 1-all in the 61st minute. Senior Jack Tannehill then appeared to give the Chargers the winning margin with a goal in the 71st minute for the 2-1 lead at the time.

The Yellowjackets managed to keep their season alive a little bit longer with a goal inside the final two minutes of regulation to force overtime.

“We’ve been talking facing adversity and we’ve been facing it all year,” Crane said. “We’ve been in playoff-type games all season long and responded in all of them but one. For them to get the goal and us get the equalizer and then it was back-and-forth the rest of the game. The boys never quit and that was big to see.”

Midway through the first 10-minute period, Josh Zuniga provided the winning goal followed by a goal from John West Perry at the end of the first overtime period to provide a cushion ahead of the final 10 minutes.