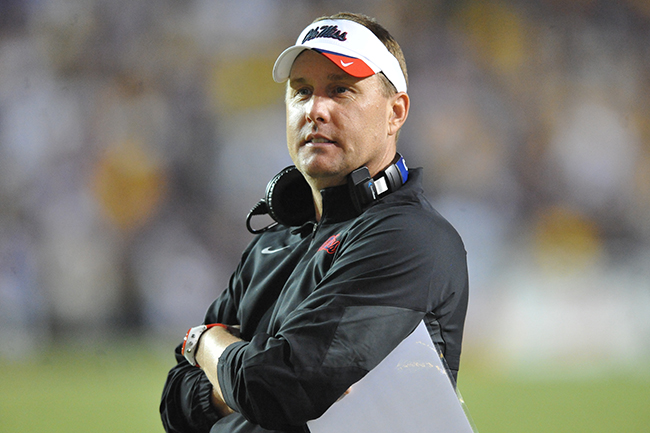 Ole Miss' head coach Hugh Freeze reacts against LSU at Tiger Stadium in Baton Rouge, La. on Saturday, October 25, 2014. Freeze will return to Ole Miss for the first time since resigning as the Rebels head coach in 2017 when Liberty comes to Oxford on Nov. 6, 2021.

Lane Kiffin’s second season at Ole Miss will feature unique matchups, including the return of a former Ole Miss coach.

The Rebels released their entire 2021 football schedule on Wednesday and one of the most intriguing matchups on the schedule does not involve another Southeastern Conference team.

The Liberty University Flames will come to Oxford on Nov. 6, marking the return of Hugh Freeze to Ole Miss for the first time in more than four years. Freeze abruptly resigned as the Rebels’ head coach in the summer of 2017 following what former athletics director Ross Bjork called a “pattern of personal misconduct” that included calls to an escort service on his school-provided cell phone.

Hired as the Flames’ new head coach in December 2019, Freeze has an 18-6 record in his first two seasons at Liberty. The Flames went 10-1 in 2020 and were ranked for the first time in program history. They defeated No. 9 Coastal Carolina, 37-34, in overtime of the Cure Bowl in Orlando on Dec. 26.

The Rebels will start the 2021 season with a trip to Atlanta to play Louisville on Sept. 6 at Mercedes-Benz Stadium in one of two Chick-Fil-A Kickoff Games. Alabama and Miami are playing in the other game on Sept. 4.

Ole Miss’s remaining non-conference games include the home opener against Austin Peay on Sept. 11 and Tulane on Sept. 18.

The Southeastern Conference portion of the Rebels’ schedule will begin with a trip to Tuscaloosa to play Alabama on Oct. 2. Other road SEC games include Tennessee, marking Kiffin’s return to Knoxville, on Oct. 16, and Auburn (Oct. 30). For a second straight year, the Egg Bowl will not be played on Thanksgiving Day. The Rebels will travel to Starkville to close out the regular season against Mississippi State on Nov. 27.