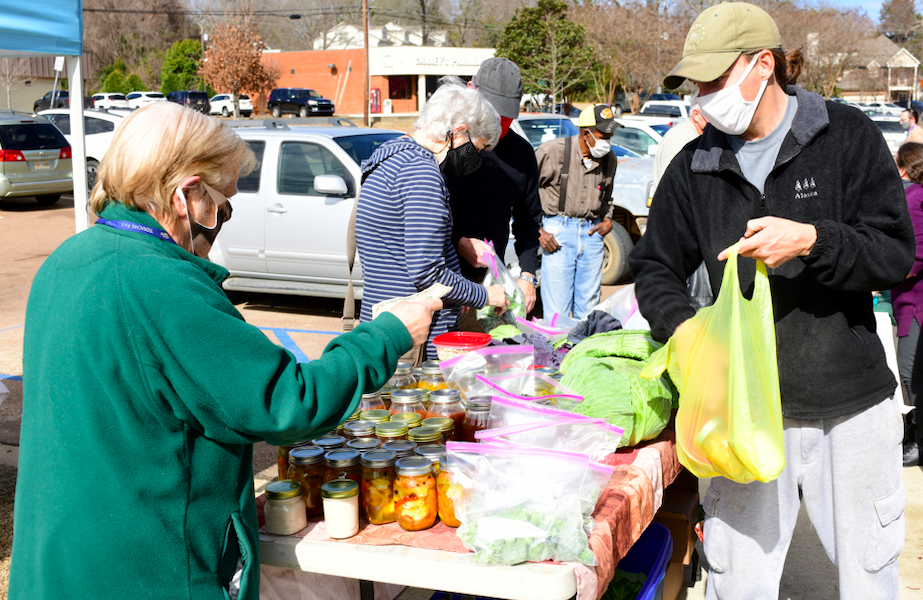 Sarah Playfor, right, buys some items from Mart Mounger, left, of Halleyah Farms at the Oxford Community Market located at the Old Armory Pavilion on Tuesday, January 26, 2021. The Board of Aldermen voted on Monday to donate their $50 fee from Yoknatawpha Arts Council back to the community market in an effort to provide some financial relief due to their rent being raised. (Joey Brent)

The organizers of Oxford Community Market are getting help from the City of Oxford to help with financial relief due to an increase in rent to use the Old Armory Pavilion.

During Monday’s recessed meeting, the Board of Aldermen approved to donate their monthly rental fee to use the facility back to OXCM for the next 23 weeks. The City will donate a total of $1,150 back to OXCM.

Oxford Mayor Robyn Tannehill said she met with YAC executive director Wayne Andrews prior to Monday’s meeting to ask why the rent was raised for OXCM. Tannehill explained YAC had reduced the rental fee for OXCM, and the increase was to get it closer to what YAC charges other organizations to use the facility.

“(Andrews) explained to me that they had been that high for everyone else, but y’all’s had been reduced,” Tannehill said.

The community market is the only organization that utilizes the Pavilion space on a weekly basis, holding markets every Tuesday afternoon nearly year-round.

Donating the City’s fee of $50, which is what they ask from YAC in exchange for allowing them to manage the Pavilion, back to OXCM through the end of June was as long as the Board was willing to go at this time.

The Board, under the advisement of city attorney Pope Mallette, could not approve to waive the fee altogether, as they feared it could create legal issues with other 501C non-profit organizations asking to waive fees for them.

With municipal elections taking place in June and a new Board of Aldermen taking office in July, Tannehill said they could not tie a new Board to any long-term decisions made prior to them taking office.

“It would just mean that money does a circle,” Tannehill said of approving the donation. “The city would make a donation of that $50 and then (OXCM) would submit to YAC, who would then submit it as their fee.”

“What we’re asking and hoping that you all in our community sees is that a farmer’s market is a really neat community aspect that has the organizational infrastructure and volunteer support to manage all of these different outreach programs,” said OXCM director Betsy Chapman. “I understand that other groups, churches and organizations, rent occasionally. But, we are a consistent asset and value to that space and utilizing it, hopefully, in a way that makes Oxford proud.”

A current lease agreement between the City of Oxford and YAC pertaining to the Pavilion went into effect in 2015. Mallette advised the Board they could revisit the current lease with YAC during budget sessions later this year to see if the market value still properly reflects the amount YAC is charging to rent out the Pavilion.

The Board cannot dictate what YAC charges organizations to use the space, but Davis noted they were in discussions with Andrews about working out a compromise last year before the COVID-19 pandemic hit Lafayette County and Mississippi in March.