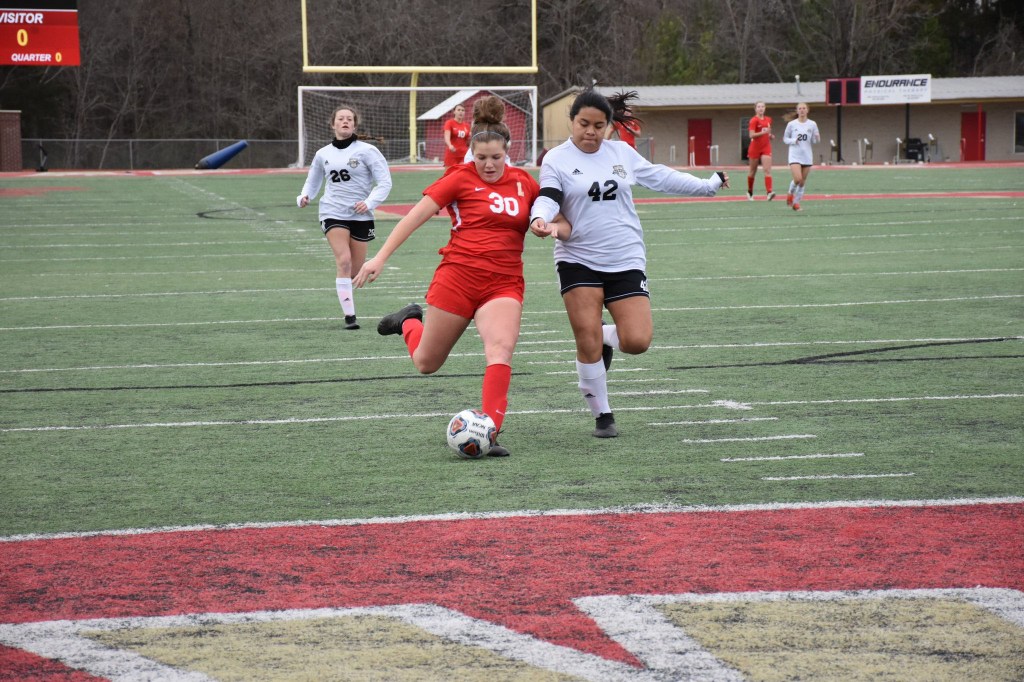 Lafayette’s Julia Perkins (30) scores in their match against New Hope in the second round of the MHSAA Class 5A playoffs at William L. Buford Stadium on Saturday, January 30, 2021. Lafayette won 5-0. (Jared Redding)

For the second time in postseason play, it was business as usual for the Lady ‘Dores.

Lafayette (15-2) used a flurry of first half goals to pounce on the New Hope Lady Trojans early and come away with a dominating 5-0 win in the second round of the MHSAA Class 5A playoffs at William L. Buford Stadium Saturday.

The Lady ‘Dores kept the ball in their hands for the majority of play and forced the issue from the opening kick.

“I was super pleased with our performance,” Lafayette head coach Melinda Scruggs said. “Just being able to come out quickly and be aggressive and getting the balls into attack so we can capitalize. I think we had created a lot of opportunities. Once we started putting them back in the net, it just continued. We played with confidence. We talked a lot, playing quick balls. It just came together.”

After a few earlier scoring opportunities fell through due to excellent goal keeping, Julia Perkins capped managed to put through back-to-back goals in a matter of seconds to take a 2-0 lead in the 14th minute.

“Julia (Perkins) does a great job with her back to goal up top, just being creative,” Scruggs said. “She can definitely look, turn and find the goal. It just the players around her too. They’re all doing things together to be successful up top.”

Hudson Lindsay found the back of the net six minutes later after nearly scoring just 30 seconds into the game. Lindsay’s second goal in the 29th minute came off of a beautiful assist from Perkins, a pass in between the legs of a New Hope defender, allowing
Lindsay to take care of the rest.

Lillie Grace McCutchen put through Lafayette’s lone second half goal with her head, giving her team a 5-0 lead in the 52nd minute and cruise control the rest of the way.

“Eighty minutes today was good for us,” Scruggs said. &quot;We needed to have our legs out there for 80 minutes. New Hope is a good team, they’re really physically talented. We’re just trying to build a culture up here, playing as a family. We don’t want one person working harder than the other. I feel like they made that statement.”

Lafayette will now face a familiar foe in Saltillo on the road for the 5A North Half Championship game on Tuesday. Both teams split wins in region play with the most recent match ended in a 2-1 loss for Lafayette on January 15.

“We fortunately work as a whole,” Scruggs said. “If the attacking players are working, so are my backs. Everyone just jelled and worked together communicating. Everything is just coming together when it needs to. We have a big opponent ahead of us. We just have to be ready and prepared.”