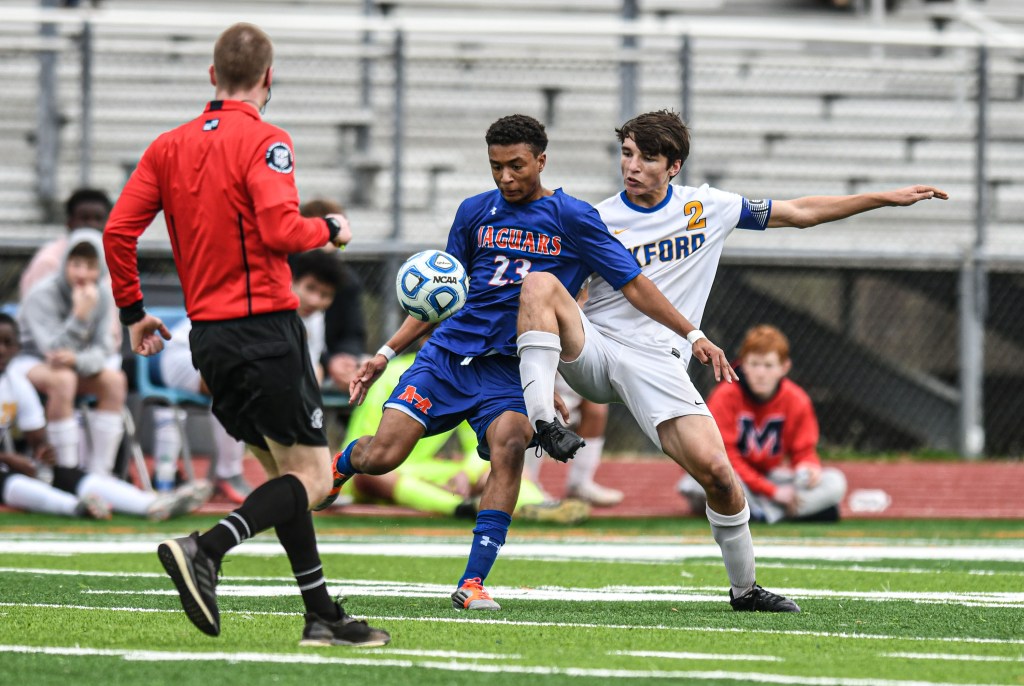 Oxford High’s Christian Boudreaux (2) and Madison Central’s Jordan Jones (23) in the second round of the boys high school MHSAA Class 6A soccer playoffs in Madison, Miss. on Saturday, Jan. 30, 2021. Oxford lost 4-1 and were eliminated from the 6A playoffs. (©Bruce Newman)

CLINTON — The Oxford girls soccer team’s rematch with Clinton on Saturday went much differently than their first encounter earlier this season.

When the two teams met at mTrade Park in early November, the Chargers jumped out to a commanding lead only to have the Arrows end up tying them.

On Saturday, it was the Arrows that jumped out on the Chargers, holding on for a 4-0 win at Clinton High School in the second round of the Class 6A playoffs.

Clinton’s threat up front led by sophomore Jada Jelks put pressure on the Chargers defense all match. Jelks got the Arrows on the board in the 22nd minute for the 1-0 lead at the time.

“We didn’t have the wind in the first half and we got out of position and gave (Jelks) a through ball down the middle and she finished that,” Crane said. “In the second half we had momentum the first 15 minutes or so and felt like we were going to get one and felt like it was just a matter of time.”

Oxford (16-2-1) maintained a one-goal deficit heading into the second half and had more energy at the start of the final 40 minutes.

Multiple chances to tie the game went by the wayside and Tailynn Remmel got around Charger goalkeeper Mary Anna Fulton to double the Arrows’ lead in the 57th minute.

With 20 minutes remaining and down two scores, Oxford pulled a defender to add another offensive player, but Clinton’s attack took advantage. Goals by Zoie Zumbro in the 70th minute and one by Jakiya Michael in the 75th minute provided the winning margin.

“We didn’t play our best soccer today at all. Not in any facet of the game,” Crane said. “We got out of sync in the first half with the wind. The ball was popping up on us and getting underneath us and we weren’t playing our game. We weren’t playing to feet and we weren’t doing the things that we normally do to be successful. Tough thing to watch.”

While Oxford’s boys were the aggressors against Starkville, the Chargers did not have an answer to slow down Madison Central on Saturday.

The Chargers lost to the Jaguars, 4-1, at Madison Central High School in the second round of the MHSAA Class 6A playoffs. Their season ends at 13-7.

The game got started over an hour late due to the Madison Central and Germantown girls going to penalty kicks in their second round match.

In Tuesday’s first round, the Chargers controlled the pace of play but Madison Central were the ones who dictated Saturday’s match.

“That 45-minute wait probably wasn’t the best thing for us,” Crane said. “We came out on our heels, for sure. The first half was definitely not the way we wanted it to go and obviously we came out and won the second half.”

The Jaguars (10-4-2) got on the board first in the 12th minute when John Hrivnack’s shot ricocheted off the post then bouncing off Oxford goal keeper Coker Scott to find the back of the net.

A goal by Jordan Jones two minutes later put the Chargers in a 2-goal deficit 14 minutes into the match. Will Farthing scored off a penalty kick when Oxford was called for a foul in the goalie box and a goal by Will McMillin in the final seconds of the first half was the last Jaguars goal of the match.

Despite the score, Scott made big saves in the second half to keep the Jaguars’ where they were on the scoreboard.

“He had some big plays down the stretch,” Crane said. “He makes big plays when the lights come on and we’re really proud of him and the leadership that he showed all season in that spot. He kept us in it that second half.”

Madison Central advances to the North Half championship against Clinton, who defeated Germantown 4-1.