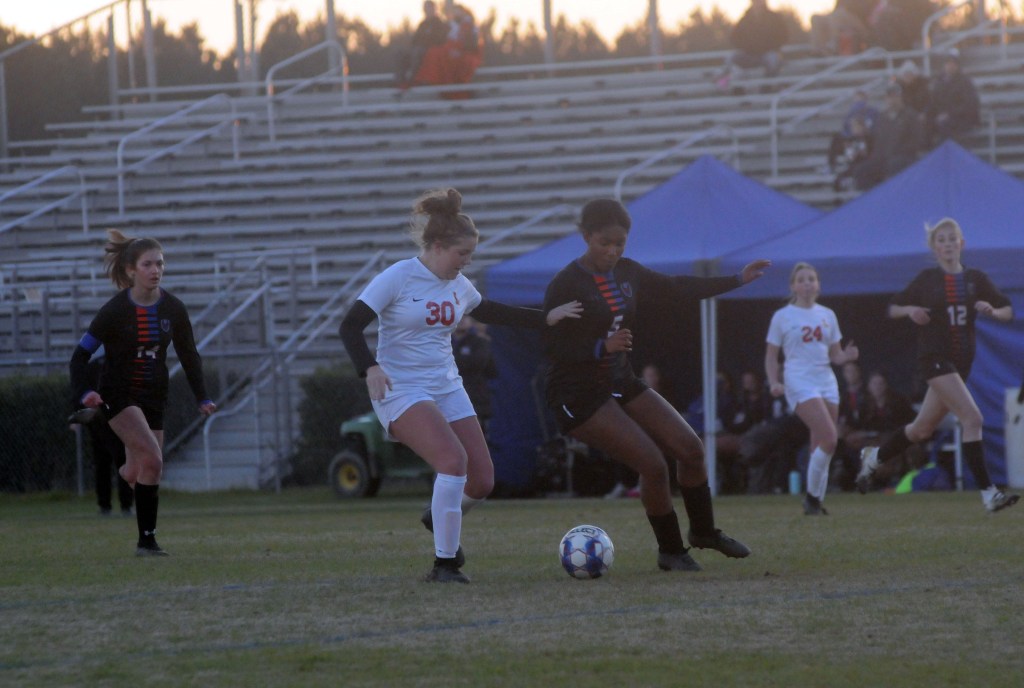 Lafayette’s Julia Perkins (30) battles Saltillo’s Iyana Morgan (5) for the ball during the first half of thei Class 5A North Half championship at Saltillo High School on Tuesday, February 2, 2021. The Lady Commodores won 3-1. (Jake Thompson/The Oxford Eagle)

SALTILLO  — The Lafayette girls soccer team took a punch to the mouth in the opening minutes of their 5A North Half match, but like any experienced prize fighter, they quickly shook it off.

The two-time defending Class 5A champions rallied to defeat Saltillo 3-1 at Saltillo High School on Tuesday, clinching a berth to their third straight state championship appearance. It is the Lady Commodores’ fifth state title appearance since 2015.

Saltillo jumped on Lafayette quickly, scoring a goal in the opening minutes off a ball bouncing around in front of the net for the 1-0 lead five minutes into the match.

The Commodores managed to regroup and keep Saltillo from scoring the rest of the match, but the Tigers quick store rattled the defending champions.

“Giving up a goal early put us down a little bit. It shocked us a bit,” said Lafayette head coach Melinda Scruggs. “It took us a while to regroup. Once we were able to regroup we started better in the second half. …I think we just needed to get our composure. It just kind of threw us for a loop. I don’t think we’ve been scored on early like that in quite a while.”

Towards the end of the first half, Lafayette started getting their potent offense rolling with solid shots on goal in the final 10 minutes but unable to find the back of the net.

The seal was broken when Julia Perkins finally put Lafayette on the board in the 54th minute, tying up the match. Lafayette’s quick-striking offense continued when Lillie Grace McCutchen scored to give the Commodores the lead four minutes later.

With constant pressure the rest of the match, Hudson Lindsay provided an insurance goal in the final five minutes for the winning margin.

“I think we knew we had plenty of time, but at the same time down 1-0 in a pretty important game they were kind of panicked at first,” Scruggs said. “I also think when they knew they put one in the back of the net that more were coming. They’re really good at being able to press, press, press.”

Lafayette will now face East Central, who defeated West Jones 1-0 in the South Half title match, in Saturday’s 5A state championship game. It sets up a rematch of last year’s match where Lafayette rallied for the 2-1 win to claim their second straight 5A title.

The match is scheduled to kickoff at 4 p.m. at Madison Central High School.