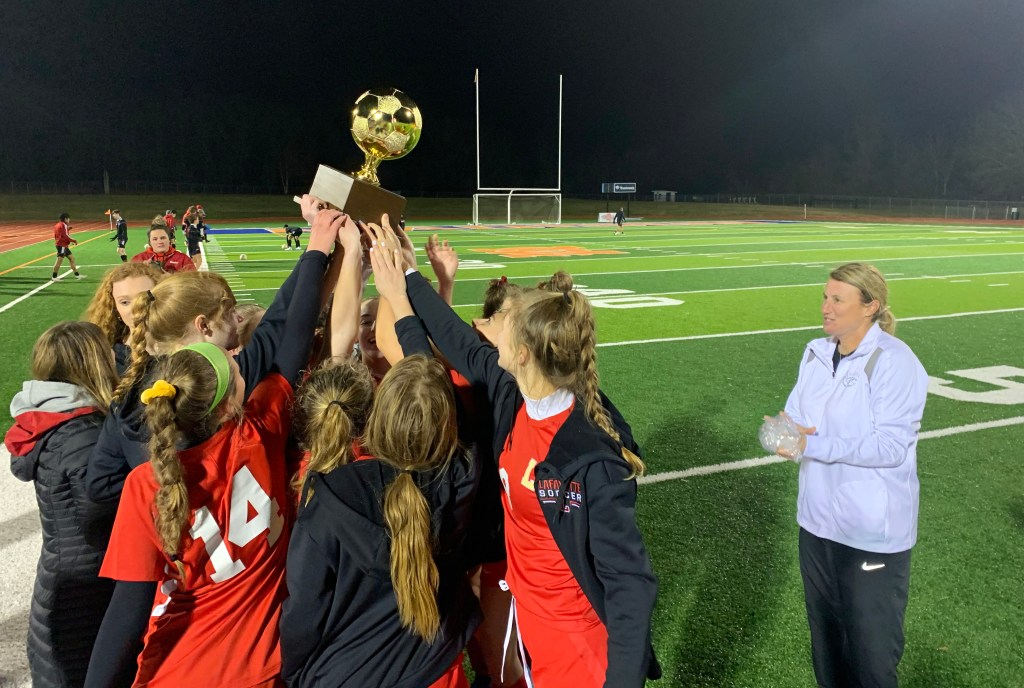 MADISON — A dynasty is brewing at Lafayette High School and it is hard to ignore at this point.

For a third straight year the Lafayette girls soccer team are the queens of Class 5A, defeating East Central 6-2 in the 5A state championship match at Madison Central High School on Saturday.

“Just even them stepping on the field today, there’s not another team I’d want to go to battle with,” said Lafayette head coach Melinda Scruggs.

On Tuesday in the North Half championship, the Lady Commodores were the ones who were dealt a blow quickly and falling behind Saltillo in the first five minutes of the match. On Saturday, Lafayette was the aggressor from the opening whistle and did not let up.

Julia Perkins put Lafayette on the scoreboard first with a solid strike that found the back of the net in the second minute of the match. An own goal by the East Central goal keeper, who tried to clear the ball but deflected it off a Lady Hornet defender to give the Commodores a 2-0 lead in the 27th minute.

The Commodores potent offensive attack showed itself in the final nine minutes of the first half to take a 5-0 lead into halftime.

“We talked before the game we wanted to be the first to everything,” Scruggs said. “First to the ball, first tackle, first header, first everything. I feel like they really took that to heart tonight.”

Lafayette provided a balanced offense on Saturday with Perkins and Hudson Lindsay scoring two goals while Caroline Perkins scored one. Julia Perkins started the second half like she did the first, scoring her second goal in the first minute after intermission.

The Lady Commodores outscored their four playoff opponents 21-3 this postseason.

“I think everybody does their part,” Scruggs said. “Getting the ball wide, getting the ball back in the box. I think they really executed that in the first half.”

The second half provided a few fireworks with East Central score two goals in the 54th and 56th minute. Things began to get chippy with both teams trading fouls and finally boiled over when Caroline Perkins and a Lady Hornet were both issued red cards and ejected after getting physical.

Lafayette managed to settle things down the final 20 minutes of the match to keep the Lady Hornets from getting any more momentum, ensuring the golden ball trophy stays in Lafayette County for another year.

“Super proud of these girls. I can’t even believe it,” Scruggs said. “They did it three times. It’s awesome.”