Lafayette basketball splits first round games in Region 1-5A tournament 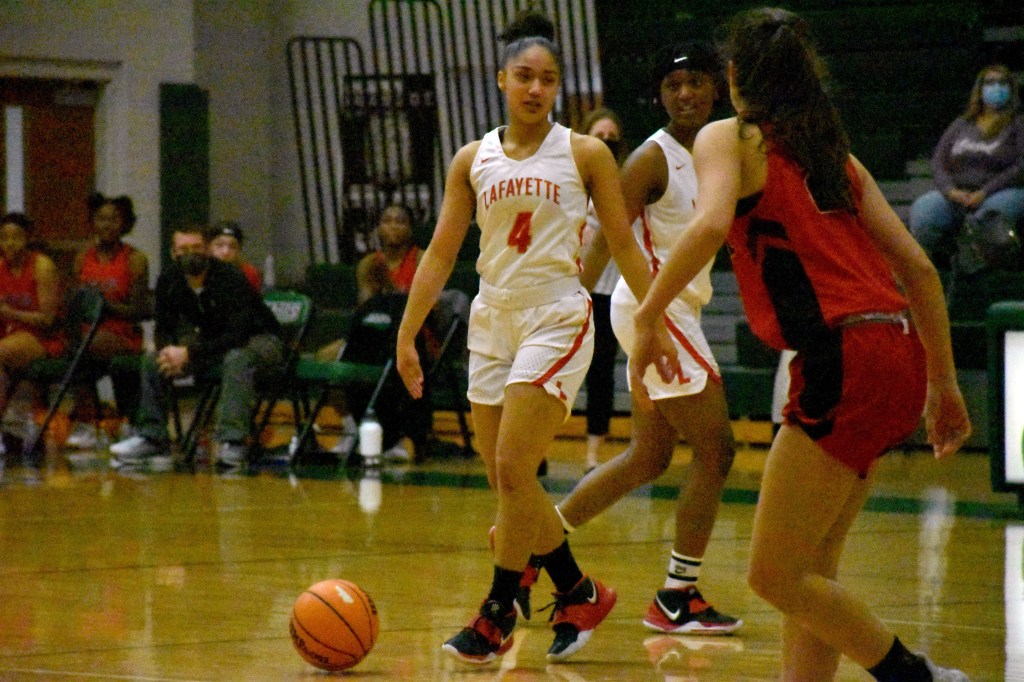 Lafayette point guard Karizma Norphlet (4) goes to pick up the ball during their game against Center Hill in the first round of the Region 1-5A tournament at Lake Cormorant High School on Monday, February 8, 2021. The Lady Commodores won 50-34 to advance to Friday’s championship game. (Jared Redding)

LAKE CORMORANT — Both Lafayette boys and girls basketball teams brought the energy Monday evening, with the latter keeping the gas pedal down for 32 minutes en route to a Region 1-5A Tournament Championship berth.

The Lady Commodores started fast and never looked back, knocking off Center Hill 50-34 to play in Friday’s championship round at Lake Cormorant High School. After back-and-forth opening minutes, Lafayette kicked into another gear to the first quarter on a 13-0 run to take a 19-4 lead, creating the separation needed for the remainder of the contest.

“We played really well,” Lafayette girls head coach Shayne Linzy said. “I thought we played solid for four quarters. I thought Center Hill did a good job in that second quarter. We really couldn’t pull away, but we kept doing what we needed to do despite them making shots. Overall, one of our best games this year with the energy, the efficiency of our offense, all of it.”

For the remaining three quarters, Kayleigh Prentiss willed the Lady Mustangs to try to get back in the game by attacking the paint, and dishing the ball out to teammate Candice Buford, but Lafayette had an answer more often than not for her.

“(Prentiss) is the type of kid we talked about early on with our team,” Linzy said. “When that ball is shot, whether it be her or someone on her team, we have to know where she is. She does not stop playing. We did good job keeping her off the boards. She’s pretty tough to stay with.”

Karizma Norphlet led the way for the Lafayette with 19 points, three rebounds, three assists and two steals culminating a productive week for the junior. Although quiet on the offensive end with four points, Mariah Jones was a force on the defensive end with three steals and 11 boards. Deedee Shaw added nine points on the night.

“(Norphlet) came to play,” Linzy said. “Her shots looked good. She’s been focused the last few days. It led to her performance tonight. We’re not surprised we got what we got out of her…Mariah does so much for the team. Other people will focus on her, especially with the night Karizma had. We gave them good looks with both of them.”

The Lady ‘Dores await the winner of No. 1 seed Saltillo and No. 4 seed Lake Cormorant Friday.

Boys hang tough, fall to Mustangs
After being humiliated in both regular season meetings, the Commodores made it a point to not be pushed around.

They did the pushing in the paint for the majority of play, but it wasn’t enough to stop Zandon Haralson or Kaeden Laws as they lifted Center Hill over Lafayette 58-44, putting their season on the line in Thursday’s consolation game. In order to keep up with the Class 5A runner-up from a season ago, the Commodores they had to control the game with the ball in their hand.

“Center Hill does a really good job in transition and play at a really fast pace,” Lafayette boys head coach Brad Gray said. “The faster the game gets, the better they are. I told our guys if we can keep the score in the 40’s and 50’s, that means we’re controlling the pace and the tempo, then we have a shot.”

Brendan Toles and Mario Wilbourn combined for 19 points and played a key role in Gray’s game plan, getting rebounds and taking advantage of second chance opportunities down low. After two quarters, it worked as Lafayette only trailed 27-23 at the break.

“They did a good job right there, getting offensive rebounds, put backs,” Gray said. “Center Hill is a quality basketball team. They play in championship games. They didn’t do that by accident. For us to come out and fight when we had every opportunity to lay down, I’m just so proud of that.”

With just over three minutes left in the third quarter, Lafayette trailed by two points, only to see a 10-0 Center Hill run put them in a big hole going into the fourth quarter down 12. The Mustangs forced five consecutive turnovers via half court pressure during that stretch. Center Hill kept pace the rest of the way.

“Our kids fought, competed and played with the most toughness that I’ve seen this team play with this entire season,” Gray said. “We were competing for loose balls, getting physical, blocking out.”

The Commodores will face the loser of Saltillo-Lake Cormorant Thursday with a 5A playoff spot at stake.