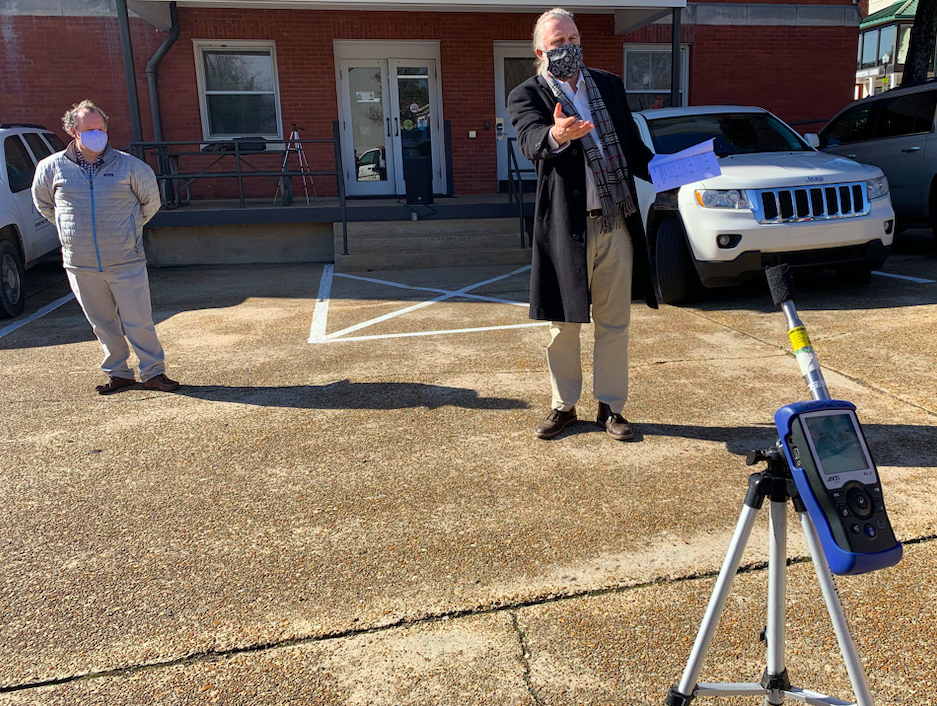 Dave Woolworth, center, conducts a sound demonstration for Oxford’s Board of Aldermen behind Oxford City Hall on Monday, February 8, 2021 The Board is considering updating their current sound ordinance. (Jake Thompson/Oxford Eagle)

The Oxford Board of Aldermen are looking to potentially make changes to the city’s sound ordinance.

During the Feb. 2 regular meeting, the Board held a first reading of a proposed updated sound ordinance. Currently, the ordinance says no amplified sound is allowed outdoors, though Mayor Robyn Tannehill admitted the city does not enforce it, as the Board approves requests for amplified sound at events on a regular basis.

The updated ordinance would limit sound indoors, for commercial businesses, to 85 decibels between 10 a.m. and 1 a.m. The sound would be measured at the adjacent public street curb or at a minimum of five feet from the building’s facade. Between the hours of 1 a.m. and 10 a.m., the sound should not be plainly audible at the property line or from the adjacent street curb.

Businesses with an unenclosed area or outdoor area, such as patio, rooftop, yard or other area should not operate equipment or produce any other sound in excess of 85 decibels between 10 a.m. and 10 p.m. Sunday through Thursday, and 10 a.m. and 11 p.m. on Friday and Saturday.

A business with an unenclosed or outdoor area for patrons may request a permit to extend the hours to 1 a.m., though the maximum decibel level would be set at 70 for the extended hours and any live music must end at 11 p.m.

With questions lingering regarding what sound would be like at different distances at the proposed decibels, the Board held a sound demonstration behind City Hall during a recessed meeting on Monday. Dave Woolworth of Roland, Woolworth & Associates conducted the demonstration.

Music was played on an amplifier inside City Hall with the door open, to replicate what it would sound like if going by an establishment playing music with doors and windows open. The speaker was then brought outside on the sidewalk.

Tannehill noted during Monday’s meeting that they are not looking to change the sound ordinance as it pertains to Oxford’s Downtown District on the Square, as they have not received sound complaints in that area.

“We’re not trying to change anything (at the Square),” Tannehill said. “Dave has measured that so that we are giving requirements that is reflective of what’s already happening in this entertainment district. What is more challenging is when we move away from that three-block area into areas that are different zones.”

No action was taken regarding the ordinance. Ben Requet, the City’s Director of Planning, told the Board he would draft ordinances for commercial areas outside of the Downtown Historical District as well as for residential areas which would give the City three separate sound ordinances for the three different areas if all are approved.

The Board holds their next regular meeting on Feb. 16.