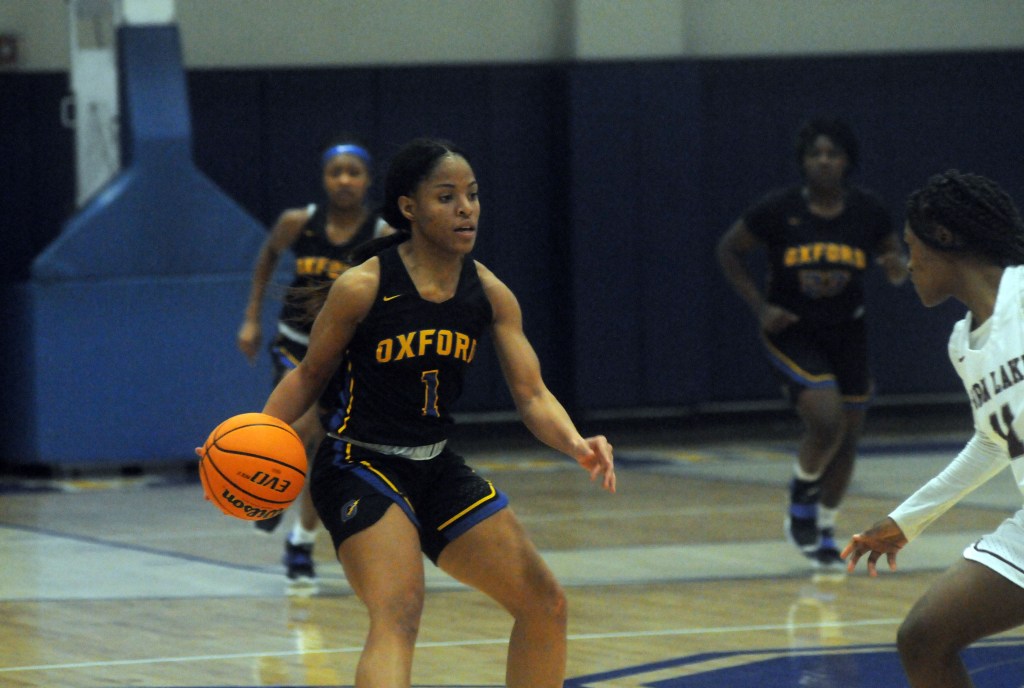 Oxford’s Audria Houston (1) dribbles upcourt agaisnt Horn Lake in their first round game of the Region 2-6A tournament at Oxford High School on Monday, February 8, 2021. The Lady Chargers won 58-43 to advance to Thursday’s championship game against Hernando. (Jake Thompson/Oxford Eagle)

The Oxford girls basketball team seems to be peaking at the right time.

With the aid of defense and the play of Audria Houston and Miracle Joiner, the Lady Chargers defeated Horn Lake 58-43 in the first round of the Region 2-6A tournament at Oxford High School on Monday.

When the two teams met at Horn Lake on Feb. 4, the Lady Eagles came away with the one-point victory. Playing again just four days later provided some motivation for Oxford, who was not going to let a win slip away twice.

“There’s no doubt this time of year is when you want to be playing your best, and I saw some really good things from our team,” said Oxford head coach Cliff Ormon. “(The last game) kind of gave us a little motivation. It was a catch-22. You never want to lose but it was a game where it was back and forth and you could see a lot of things if we do differently I thought (the win) could have been. One of the things was our focus around the basket and I thought it was a much different team playing tonight and finishing around the goal.”

Oxford came out high energy on both ends of the court, helping them take a 31-17 lead into halftime. Horn Lake managed to make the game close midway through the second quarter, but the Lady Chargers scored 16 points in the final four minutes of the half to regain a comfortable lead.

The second half saw more of the same with Oxford maintaining a 20-point lead most of the final two quarters and winning the rebounding battle on the defensive end.

“I thought the defense and focus early in the game was there,” Ormon said. “We did a really good job of staying with the players that hurt us the last couple times they’ve played us.”

The duo of Houston and Joiner has led the Lady Chargers in the final stages of the regular season and into Monday’s opening round game. Houston had a game-high 18 points to go with six rebounds, while Joiner finished with 15 points.

“For two sophomores I think they’re a pretty dang good duo,” Ormon said. “Exciting to watch play. I thought the biggest change was whenever they started to see other stuff that goes with being a great basketball player. The rebounds, the defensive effort and usually that leads to getting some easy buckets for us.”

Oxford will play Hernando for the 2-6A tournament championship on Thursday at 7:30 p.m. inside the OHS gym. The Lady Chargers have already clinched a spot in next week’s 6A playoffs with Monday’s win, but a win on Thursday gives them a bye into the second round. A loss to the Lady Tigers gives Oxford a home game in the first round.

The Oxford boys team plays their first round match on Tuesday at 7:30 p.m. against Horn Lake.