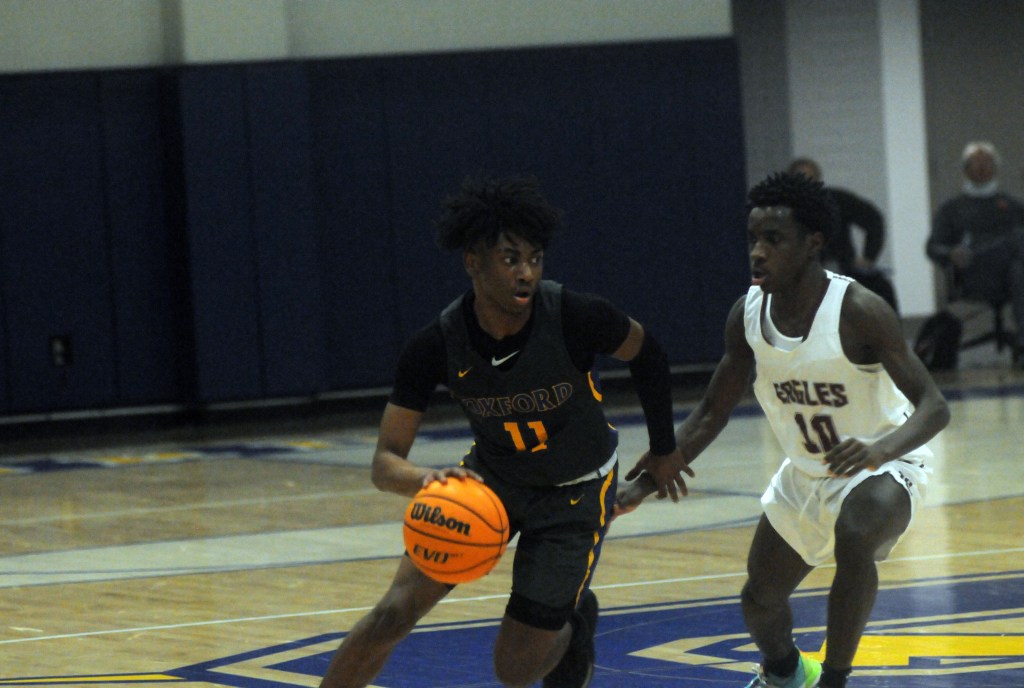 Oxford’s Derrious Southern (11) dribbles past Horn Lake’s Mekhi Williams (10) during their first round game of the Region 2-6A tournament at Oxford High School on Tuesday, February 9, 2021. The Chargers won 63-62 to advance to the tournament championship. (Jake Thompson/Oxford Eagle)

DJ Smith scored six points on Tuesday, but the final two points were the biggest.

With 2.2 seconds remaining, Smith received the inbound pass, then cut his way to the goal and hit a layup as time expired to send the Oxford boys basketball team to next week’s 6A playoffs in their 63-62 win over Horn Lake at Oxford High School.

The buzzer-beating win secured the Chargers a spot in Friday’s Region 2-6A tournament championship against Southaven. The bigger picture, though, is Oxford will get to be at home for their first game of the playoffs.

“The game had a lot of different looks and we like the way it looked at the final buzzer, I can tell you that,” said Oxford head coach Drew Tyler. “Last second shot and win the game by one. This time of year everybody is 0-0. This is the third season. It’s the season that counts and they made the plays.”

Oxford had things under control in the first quarter, scoring at will against the Eagles and grabbing a 20-17 lead after the first eight minutes of play.

One of the game’s many looks appeared in the second quarter when the Chargers’ offense left them as they did not hit a shot until the three minute mark. Horn Lake outscored Oxford 18-8 for a 35-28 lead at halftime. Four of Oxford’s second quarter points came from the free throw line.

“We were Horn Lake’s sixth man for a lot of the game,” Tyler said. “But down the stretch, to cut into the lead and give ourselves a chance to win we ran set plays and we made shots.”

Heading into the final quarter, it was Oxford’s turn to have a lopsided eight minutes. Trailing by 13 points, the Chargers outscored Horn Lake 19-11 to secure the win.

The winner of Oxford and Southaven will receive a bye for the first round of next week’s playoffs and the loser will host a first round game. Horn Lake will play Hernando in the consolation game at 6 p.m. on Friday with the winner earning the three seed in 2-6A and the loser seeing its season end.