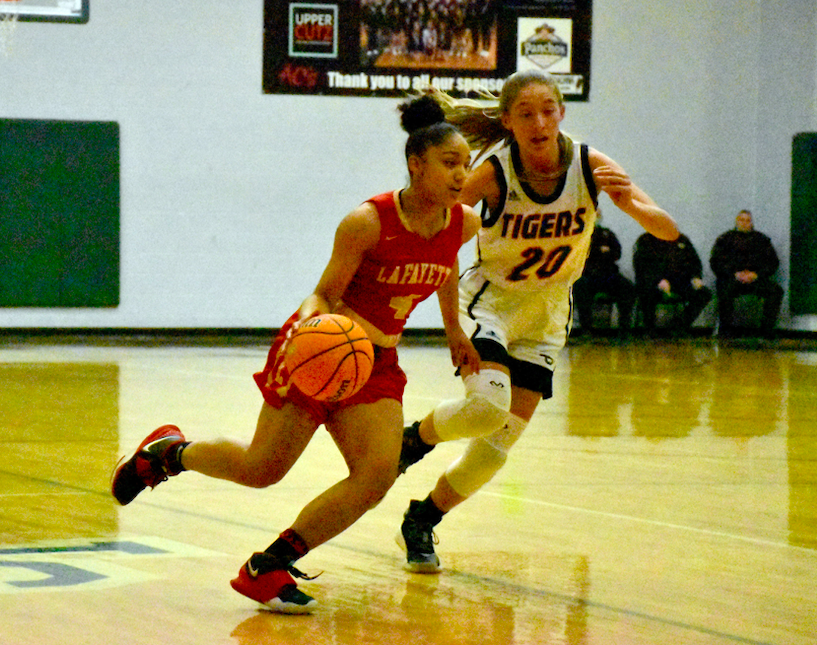 Lafayette’s Karizma Norphlet (4) dribbles past Saltillo’s Caroline Hamm during the Region 1-5A Tournament championship at Lake Cormorant High School on Friday, February 12, 2021. The Lady Commodores will host Ridgeland in the first round of the Class 5A state playoffs. (Jared Redding)

LAKE CORMORANT — Throughout the game, including the final four minutes of the first half, the game plan was on full display for Saltillo. They wanted to keep the ball out of Lafayette’s hands and allow them to make the mistakes on the other end.

Offensive woes and a brutal fourth quarter made a difference in the championship round of the Region 1-5A basketball tournament as they fell to Saltillo 36-26 at Lake Cormorant High School Friday afternoon.

After scoring nearly half of their points in the first quarter, Saltillo’s zone defense created all sorts of problems for Lafayette, forced and unforced. Lafayette resigned to taking shots from long range the majority of the contest and struggled to capitalize.

“They definitely had the size advantage,” LHS girls head coach Shayne Linzy said. “We just struggled outside tonight. We didn’t make the shots that were hitting consistently on Monday…this was just one of those games where the defense Saltillo was playing, they did a great job and our youth just showed up defensively at the wrong time.”

The Lady ‘Dores committed 18 turnovers, most of which coming in the second half. Karizma Norphet, their spark in their first round game against Center Hill, was held to just two points, both on free throws.

“I thought (Norphlet) had some shots, but she forced a couple shots,” Linzy said. “As far as containing her, that beat her up pretty well. Her shot just wasn’t falling tonight. That’s part of it. We just have to shoot better in the playoffs.”

Mariah Jones led Lafayette with eight points and six rebounds while Sha’brya Pettis finished with six points, both of which coming from beyond the arc. On the other end, Saltillo’s Janiah Hinton proved to be a problem on the offensive end with 14 points, 11 of which coming in the first half and came down with five rebounds. Ivia Presley wasn’t too far behind with her nine
points.

Regardless, Lafayette will be playing postseason basketball as they use the No. 2 seed to host Ridgeland in the opening round of the MHSAA Class 5A playoffs. Tipoff is currently slated for Monday pending potential inclement weather.

“I told the girls, let this hurt and use that going forward. So we don’t have to feel this pain anymore,” Linzy said.

Boys fail to keep up as season ends
The same energy the Commodores had for three quarters against No. 1 seed Center Hill Monday could not be replicated in the Region 1-5A Tournament consolation round as the Saltillo Tigers pulled away late and knocked off Lafayette 49-32, elimitinating the Commodores from next week’s 5A playoffs.

It was the same achilles heel Friday afternoon that hurt Lafayette in recent years: offense.

“We didn’t have that killer instinct that we had Tuesday night,” LHS boys head coach Brad Gray said. “We looked timid offensively. We were short on a lot of our shots. Bottom line, we couldn’t get the ball to fall in the basket.”

Defensively, it didn’t get any easier as Cade Hamm and Braxton Gibbs combined for 35 points on the night and took advantage of pressing situations to create separation starting in the second quarter with a 10-2 run and not looking back.

“We tried get out and pressure and trap a little bit more than we’d like to do,” Gray said. “That’s not our style. We just gambled and took our chances. When you do that, you give up some easy baskets.”

The freshman Jeremiah Davis put on an impressive season finale in defeat, scoring 14 rebounds to go with two steals. Mario Wilbourn had nine while Brendan Toles was held to just two points for the game.

Looking ahead, the roster for next season will have a lot of familiar faces with the exception of Toles and J.C. Dennis, but continued growth will be needed sooner rather than later according to Gray.

“We got some potential coming back we just have to get better offensively,” Gray said. “Until we can get to the point where we can score, it’s going to be like this. We play well enough defensively to give us a shot in every game. If we can hold teams in the 40’s, 50’s, 60’s, you usually have a shot, but if you’re scoring in the 20’s, 30’s, 40’s, do the math, it doesn’t add up.”