Oxford girls hold off Hernando to win Region 2-6A championship 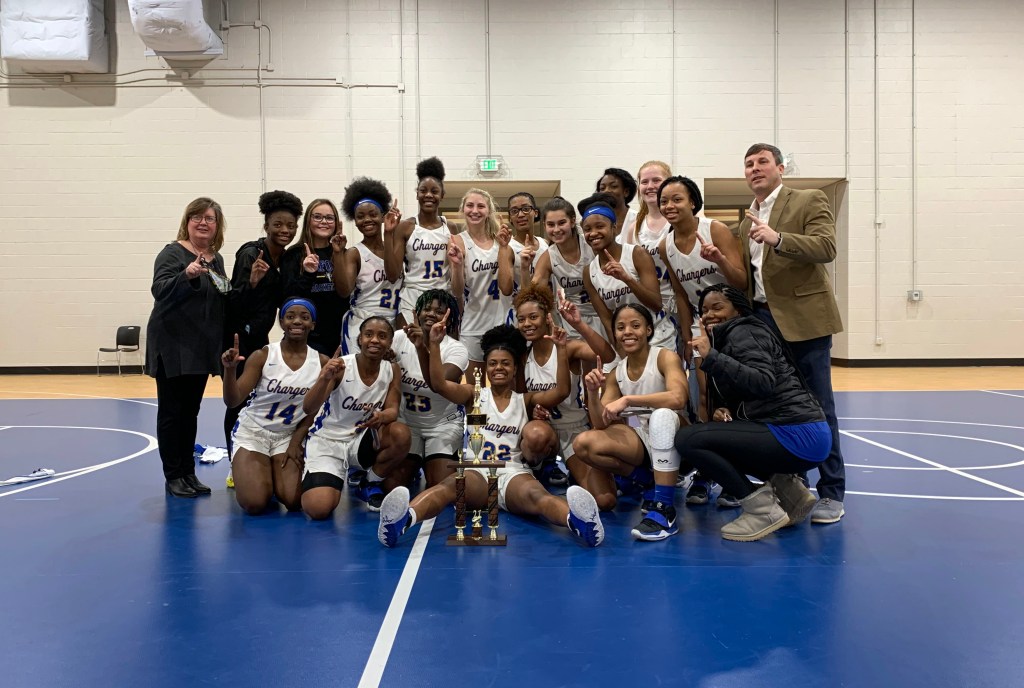 The Oxford girls basketball team pose with their trophy after defeating Hernando, 47-45, to win the Region 2-6A Tournament championship at Oxford High School on Friday, February 12, 2021. The Lady Chargers secured a first round bye in next week’s Class 6A state playoffs with the win. (Jake Thompson/Oxford Eagle)

The final 75 seconds may have been the longest stretch of time in Cliff Ormon’s career.

The Oxford girls basketball head coach watched as his team took a large step forward in growth as the held off a last-minute surge by Herando, defeating the Lady Tigers 47-45 to win the Region 2-6A Tournament championship on Friday at Oxford High School.

The Lady Chargers victory marked the first region championship for the program since the 2015-16 season when they defeated West Point for the 2-5A championship.

With 1:15 remaining, Oxford held a 10-point lead over Hernando and managed to weather an 8-0 run and kept the Lady Tigers from tying or winning with a last-second shot.

“There’s no doubt it’s been a while since we’ve been able (to win a championship),” Ormon said. “You think that’s easy getting a team to be winners and that’s been the hardest challenges. Everyday you come to work. It’s a young group but these last two weeks, it’s been a different focus at practice. They are understanding the game plan and what we’re trying to do.”

Oxford’s defense managed to dictate the pace of play in the opening minutes of the game, but Hernando began putting offense together to end the quarter.

The game was one where the Lady Chargers would manage to create some distance between them and Hernando, but the Lady Tigers always managed to get within a couple points.  Oxford’s defense, specifically the play of Miracle Joiner, managed to hold Abbey Harrison, the Region 2-6A Player of the Year, to only six points.

“I think that’s been the biggest key to this team,” Ormon said of Oxford’s play on defense. “We were young and I always pride myself on being a defensive coach. If you watched early in the season it wasn’t there. We didn’t understand why were playing off of a man or what takes to shut down someone. Tonight, Abby Harrison who had 22 and 26 (points) against us in our other games and we held her to six points. It was a total team effort.”

With the win, Oxford secured a bye into the second round of next week’s Class 6A playoffs and will not play again until Friday. The Lady Chargers will host the winner between Murrah and Tupelo.

Oxford boys head coach Drew Tyler knew if his team could find a way to stick close to Southaven then they would have a chance of securing another region championship of their own.

For about a quarter and a half, the Chargers were accomplishing their goal but Southaven ultimately managed to overpower them and pull away for the 60-38 win to claim the 2-6A championship.

“We were very strategic in what we were doing on both the offense and defensive end,” Tyler said. “We talked about coming off the opening tip and having a great first quarter and we did. If we could have put four first quarters together we definitely would have had a chance to be able to hold the trophy up at the end of the night.”

After the first eight minutes, both the Chargers of Southaven and Oxford were tied at 9-all. The opening moments of the second quarter saw the back and forth continue, but Southaven began to create separation towards the end to take a 28-22 lead into halftime.

With the runner-up finish in the region tournament, Oxford earned the No. 2 Seed in next week’s 6A playoffs and will host South Panola in the first round. The game is scheduled for Tuesday but the potential for inclement weather on Monday may alter the schedule.