Double Decker Arts Festival canceled for 2021 due to COVID-19 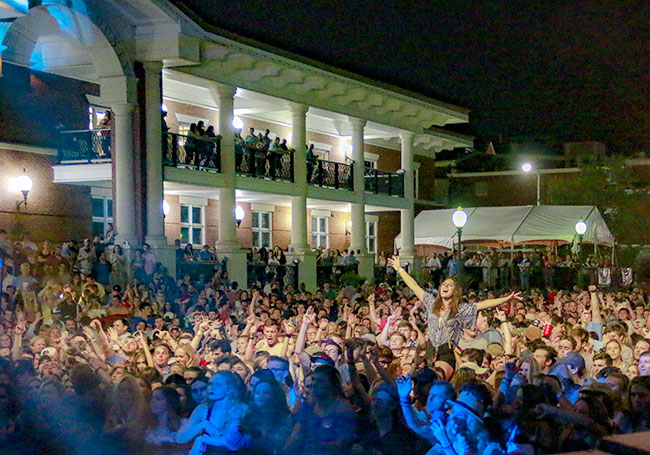 The festival's headliners, Cold War Kids, make the final performance of the 2018 Double Decker Arts Festival held on the Square in Oxford, Miss., Saturday, April 28, 2018. For a second straight year the festival will not be held, due to the COVID-19 pandemic and ongoing restrictions. (Chi Kalu, Oxford Eagle)

For a second straight year, the Double Decker Arts Festival will not take place.

The decision was announced by Visit Oxford on Tuesday, following the Oxford Tourism Council’s February meeting. Similar to the 2020 postponement, the continued uncertainty of large group gatherings due to the COVID-19 pandemic led to the decision.

Double Decker draws thousands of people to Oxford and the Downtown Square the final weekend in April every year, and with Governor Tate Reeves’ latest Executive Order limiting the number of people allowed to gather outdoors, event organizers said they do not see a way for the event to be held.

“While we know that these executive orders and restrictions may change between now and April 23, we don’t feel that there will be enough of a shift to allow us to host an event of this magnitude, safely,” said Visit Oxford executive director Kinney Ferris. “We do feel it is best to support other events throughout the community that are of a smaller scale that can promote our unique food, music and arts scene.”

The 25th anniversary of the Double Decker Arts Festival was scheduled to take place April 24 and 25 of last year, but the COVID-19 pandemic forced organizers to postpone to August in hopes of holding it then. Unfortunately the pandemic worsened throughout the summer and the event was canceled altogether.

Similar decisions have been made for other regional events this year, including the Beale Street Music Festival in Memphis and the postponement of the 2021 New Orleans Jazz Festival and the 2021 Hangout Fest in Orange Beach, Ala.

“We are all eager to gather together again and celebrate all that Oxford offers,” said Double Decker Arts Festival coordinator Lee Ann Stubbs. “The health of the public, as well as that of the people who work together to pull off this celebration, remain the top concern and have guided us to this decision. With musicians not touring as normal, crowds not allowed to gather and the rollout of the vaccine still in the beginning phase, we want the 25th anniversary to be the biggest and best yet, and we will plan for just that in Spring 2022.”

Visit Oxford intends to work alongside the Oxford-Lafayette Chamber of Commerce and the Yoknapatawpha Arts Council to host more smaller, outdoor events throughout the year similar to “Tunes Around Town,” “Sounds on the Square” and “Holly Jolly Holidays.”