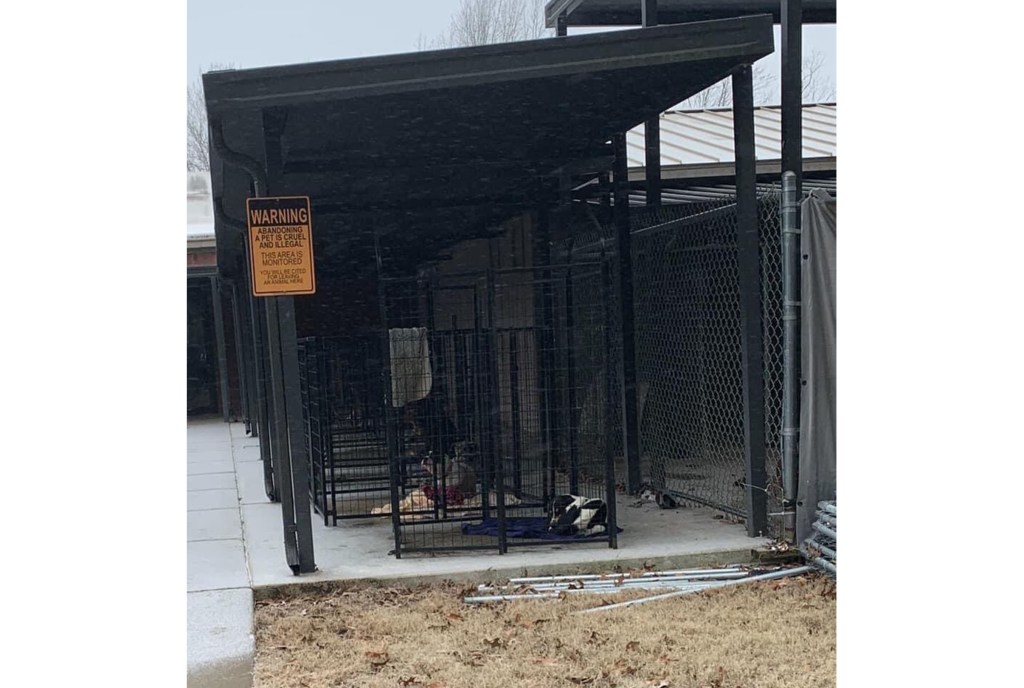 This photo of dogs in outdoor kennels at MS Critterz circulated around social media pages on Monday. MS Critterz told the EAGLE in a statement they did not leave any dogs outside for a long duration of time during the winter storm and cold temperatures. (Contributed)

Oxford animal shelter organization MS Critterz claims no dogs were left outside for extended periods of time on Sunday, after a photo of dogs in outdoor kennels circulated on social media.

Temperatures this past Sunday barely made it out of the 20-degree range, with ice beginning to accumulate ahead of Winter Storm Uri. Prior to the storm, MS Critterz put out a call for foster homes and blanket and towel donations to help keep animals safe and warm.

In a post thanking people for their donations to the shelter, the comments section was quickly overrun with photos and allegations of animal abuse, chief among them a photo of dogs in outdoor cages, which the original poster claimed was snapped on Sunday when it was 19 degrees outside.

However, according to MS Critterz board president Aynslee Smith, the photo did not tell the whole story.

“Sunday, February 11th, a few dogs were temporarily rotated outside while their indoor kennel runs were being cleaned. There was no precipitation at that point in time,” Smith said in a prepared statement. “Every outdoor dog kennel was equipped with a blanket and several dogs were provided with sweaters, except for those which we knew would ingest them.”

Members of an Oxford shelter watchdog group later confirmed that no animals were being housed outdoors at the shelter as snowfall began later that day and on Monday.

Also in the list of allegations in the comments were photos posted by a former animal shelter worker. The photos showed what the former worker claimed were trash bags of dead animals in freezers, dirty food bowls and containment areas, sick and injured animals and what one person described as “hoarding rooms.” The “hoarding room” photo had a time stamp of Feb. 29, 2020.

In response to the abuse allegations, Smith said, the board has been aware of the photos since at least November 2020 and that they are not reflective of current shelter conditions.

“In regards to the photographs, an internal investigation immediately took place once they were presented to the executive board in November 2020,” Smith said. “Our board brought in two veterinarians from outside of Lafayette County to access our animal care procedures and animal housing conditions. They gave us recommendations, but overall felt we were doing a good job.

“After two weeks of internal investigations, vet visits, camera footage and employee interviews, we came to the conclusion that some of the complaints were not valid. Any improvements or changes that were needed were made. Those that were not valid, were dismissed.”

MS Critterz is a nonprofit organization that runs off funds from the City of Oxford and Lafayette County, as well as private donations.

“We want to thank our community for all of your love and support…” Smith said. “We want to say a special thank you to our employees that have gone above and beyond working tirelessly around the clock to provide love, care and warmth for our animals.”