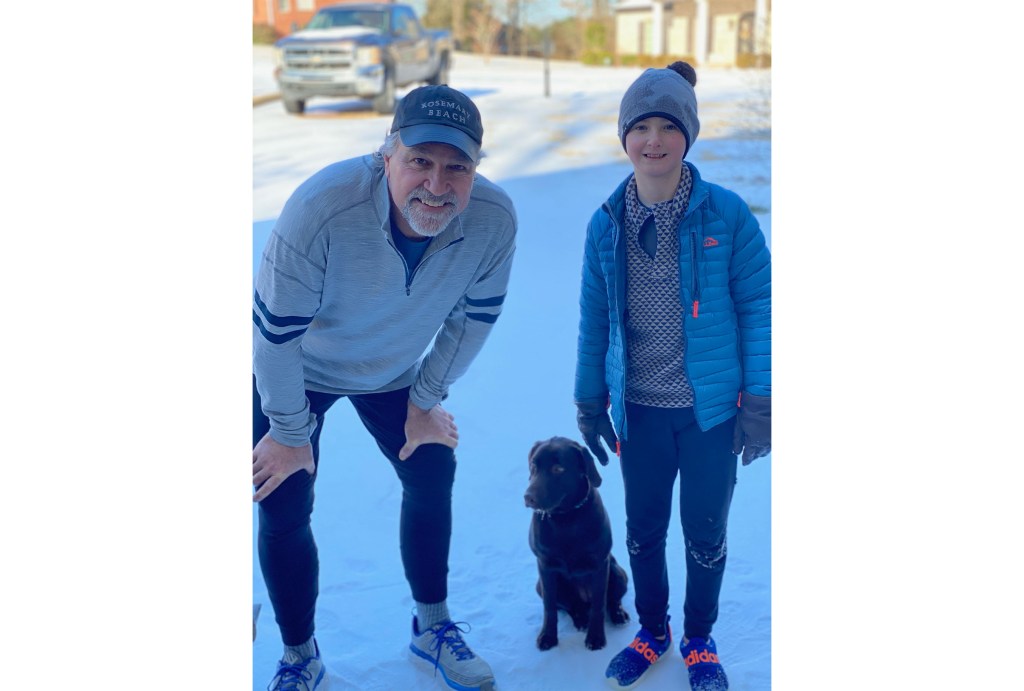 Roger Farris, left, helped rescue Alan Cordell’s, right’ eight-month-old chocolate lab “Grace,” center, from a frozen lake behind the Wellsgate neighbor after she had fallen in on Sunday afternoon. (Courtesty of Roger Ferris)

An afternoon in the snow and ice quickly turned into a rescue mission for an Oxford boy and his puppy on Sunday.

Alan Cordell was playing with his eight-month-old Chocolate Labrador, Grace, in their Wellsgate neighborhood when something no child wants to experience occurred — Grace found herself fighting for her life after falling into a frozen pond.

Cordell and his puppy were going through a field behind his Wellsgate home with a friend of his. They had walked through the same area earlier on Sunday, and were playing around the pond and away from the ice to avoid hurting themselves.

A few hours later, they went back to the same area. Cordell’s friend threw a stick for Grace to fetch, which they had been doing all day, but the stick went to a different area of the lake where the ice was not as thick and Grace fell in.

“I pretty much panicked. I didn’t know what to do,” Cordell said.

After a moment of panic and fear overtook Cordell, his friend told him to go get help while she stayed back to watch Grace. There were houses nearby around the lake,  and Cordell went to the first one he could find.

Robert Farris and his wife happened to be at their home, the first door Cordell knocked on asking for anyone to help rescue his puppy.

Farris went out to assess the situation and noticed Grace was in the middle of the lake and unable to get back up onto the surface of the ice on her paws. So, Farris went to his neighbor’s house and put on some waders.

With a stick in hand, Farris went out in his borrowed waders into the freezing water. The lake is about four- or five-feet deep, and the water was coming up to Farris’s chest.

“The hard part was just breaking the ice,” Farris said. “The ice was about an inch thick and I had this big cedar, it was really a small tree trunk that I found, and it was perfect for knocking holes in the ice. I was hoping if I got close enough, the dog would bite into the stick and (I could) pull it up on the ice, but the dog didn’t do it. The dog was screaming. I’d never heard a dog bark like that. It was so panicked, and I guess exhausted.”

Farris managed to rescue Grace on the first attempt, but he estimated she had been in the water for around 30 to 45 minutes before getting her out.

Both Cordell and Grace went back home to dry off and warm up. The pair went back by Farris’s house on Tuesday to thank him and take a photo with Grace’s rescuer.