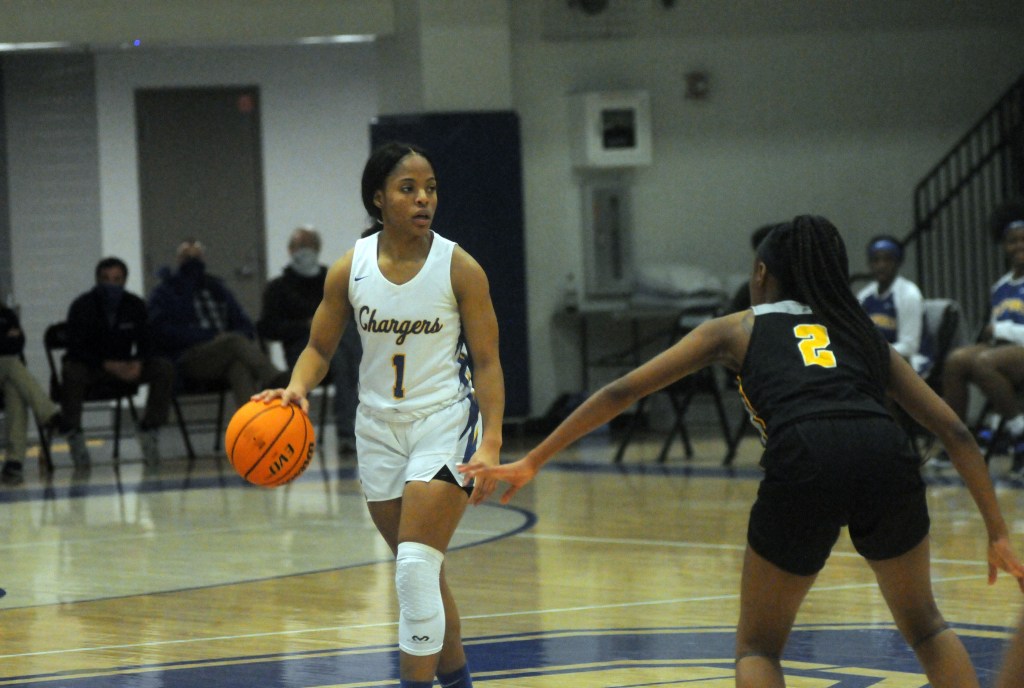 Oxford guard Audria Houston (1) during their game against Hernando in the Region 2-6A Tournament at Oxford High School on Friday, February 12, 2021. The Lady Chargers will play their second round game of the 6A playoffs on Wednesday. (Jake Thompson/Oxford Eagle)

Once the Oxford girls basketball team tips off their second-round game on Wednesday, it will be 12 days since they will have played a game.

The Lady Chargers, and all the other playoff teams, can thank Mother Nature for that.

For a second time, the MHSAA delayed the start of the state basketball playoffs due to Winter Storm Uri hitting most of Mississippi this week. The first rounds were pushed back to Friday and Saturday, but after the latest round of snow and ice, the opening rounds were delayed to Feb. 22 and 23.

The second round of the girls tournament will be held on Feb. 24, which is when Oxford will host either Murrah or Tupelo. The last time the Lady Chargers played was on Feb. 12 when they defeated Hernando to win the Region 2-6A tournament, earning first round bye.

Since that game, Oxford has not taken the court even for a practice, as schools have been closed all week due to the storm.

“We were playing really well and you kind of hate to lose that, but the other part is it’s just one things as a coach you try to focus on the things you can control and this weather is not one of them,” said Oxford head coach Cliff Ormon. “We’re like every other coach and team in the state. We’re just waiting it out and hoping to get back.”

Due to the second round taking place on Wednesday, it will give the Lady Chargers two days of practice if school campuses are able to re-open on Monday and travel conditions improve.

Before the second delay of the tournament, both the Lafayette girls and Oxford boys teams were prepared to finally get their postseason journeys underway this weekend.

The Chargers were scheduled to host South Panola on Friday in the first round while the Lady Commodores were hosting Ridgeland on Saturday. Due to the change in schedule, Lafayette will now play on Monday at 6 p.m. while Oxford’s first round game will take place on Tuesday.

Both the Chargers and Lady Commodores are in the same position as Ormon’s team, as it will be over 10 days since either team will have played a game.

“Every team’s going to be dealing with it and it’s not a good way to go about it,” Ormon said. “It’s going to be about whichever team can kind of figure it out and get to playing well the fastest. (They) will have a huge advantage.”

Teams who advance past the second round will play three games in less than a week with the third round games scheduled for Feb. 26 and 27.

All semifinal and championship round games are still on as scheduled at the Mississippi Coliseum in Jackson. The semifinal round begins on March 1.