Broadway’s bullpen outing lifts No. 6 Ole Miss over No. 10 TCU in season opener 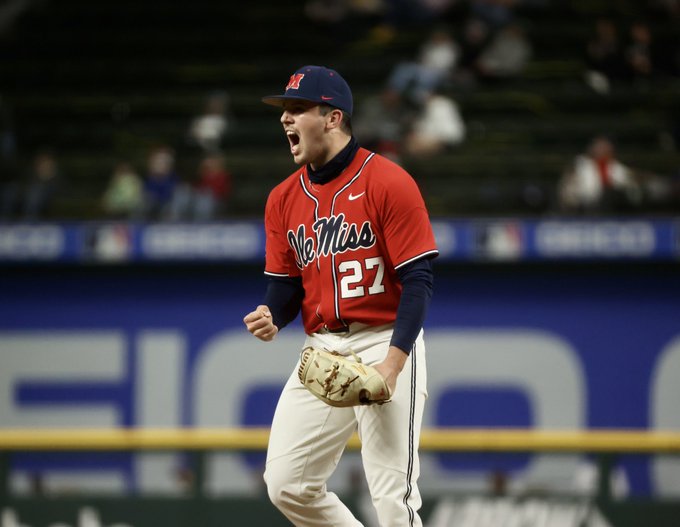 Ole Miss pitcher Taylor Broadway reacts during their game against No. 10 TCU at Globe Life Park in Arlington, Texas on Saturday, February 20, 2021. The No. 6 Rebels won their season opener, 7-3 (Joshua McCoy/Ole Miss Athletics)

The first Doug Day of 2021 did not go according to plan, but the Ole Miss bullpen was there to help carry the load on Saturday.

In the Rebels’ season opener, ace Doug Nikhazy did not make it out of the second inning but was picked up by two strong outings from Jackson Kimbrell and Taylor Broadway out of the bullpen in No. 6 Ole Miss’ 7-3 win over No. 10 TCU at Globe Life Park in Arlington, Texas.

Broadway threw four scoreless innings to pick up the save after entering the game in the sixth inning. Nikhazy walked in the Horned Frogs three runs on back-to-back-to-back walks with the bases loaded in the second inning, from there the Ole Miss bullpen kept TCU off the scoreboard the final 7-plus innings.

“I felt great. Coach (Mike Bianco) came up to me and said, ‘Go finish this thing,'” Broadway said. “Obviously I wanted to do that and I wanted to finish it out and get a Rebs win.”

A key moment in the game occurred in the bottom of the sixth inning. TCU (0-1) had two runners in scoring position with two outs and trailing by a run when first baseman Gene Wood appeared to have been hit by a pitch from Broadway. Bianco went out to challenge the call and after a review, the umpires deemed Wood interfered with the pitch and was called out to end the Horned Frog’s threat and the inning.

The next half inning, the Rebels scored two runs to make it a 6-3 game at the time.

“From our vantage point it looked like (Wood) stuck his knee out and and that’s one of those reviewable calls,” Bianco said. “But not only is it reviewable that he gets hit on purpose but if it’s a third strike then it’s a strikeout.”

Nikhazy struck out three of the first four batters he faced in the first inning, but then seemingly lost command in the second frame. A TCU leadoff double followed by four walks and a single forced the right-hander out of the game with two outs in the second inning.

The Ole Miss bats struggled in the first inning against TCU starter Johnny Ray, but the bats that were incapable of cooling off in 2020 came re-ignited in the second inning, scoring four runs.

In the middle portion of the game, Horned Frog pitcher Haylen Green worked 3.2 innings of scoreless baseball, cooling off the Rebel bats, until they scored three runs in the final three innings for the winning margin.

Second baseman Peyton Chatagnier was the guy to provide a little cushion on the scoreboard with the 2-RBI double to center field in the seventh inning followed up with an RBI-single to left field in the top of the ninth. Chatagnier went 2-for-5 at the plate.

Ben Van Cleve got the afternoon started with two runs batted in off a double to right field. The Ole Miss designated hitter went 2-for-3 at the plate on Saturday.

“Late getting runs was huge for us, obviously,” Van Cleve said. “We kept saying in the dugout we need insurance runs. We need to keep adding on, adding on. Finally, we got some guys to click and got some guys to get some big hits and drive in some runs.”

Ole Miss will face No. 3 Texas Tech on Sunday with a first pitch set for 3 p.m. CT.