No. 6 Ole Miss holds on to defeat No. 3 Texas Tech 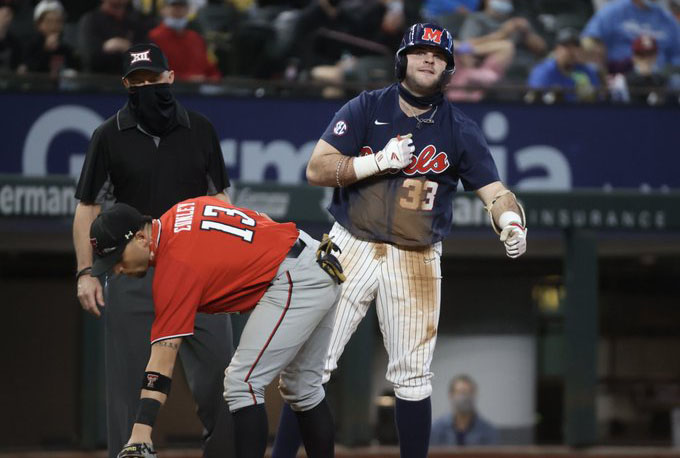 After a little tension in the ninth inning, the No. 6 Rebels held on to defeat No. 3 Texas Tech, 5-4, for their second win at the College Baseball Showdown at Globe Life Park in Arlington, Texas.

Over their last two opening weekends, the Rebels (2-0) are 4-1 with a pair of wins over then No. 1 Lousiville last February and a win over No. 10 TCU and Sunday’s win.

Gunnar Hoglund may not have had the outing he was looking for, but it was still dominant nonetheless with 11 strikeouts, just one shy of tying a career-high. He did give up a pair of home runs, including Nate Rombach’s 2-run shot in the second inning to give Texas Tech (0-2) the early 2-0 lead.

Dylan Neuse’s solo home run in the sixth inning, knocked Hoglund out of the game, leaving the final 11 outs up to the bullpen after going 5.1 innings. Hoglund gave up three runs, all earned, on three hits while walking three batters.

“I started the game off and I felt like I had all my pitches working and then the third inning I think I didn’t have my best stuff with my slider, command wise,” Hoglund said. “I just had to battle through it and keep trying to put up zeroes for the team.”

Austin Miller was fist to pitch in relief duty and managed 1.2 scoreless innings of work before handing it off to Max Cioffi who also worked 1.2 innings. Things got interesting in the ninth inning when freshman Luke Baker came in for his collegiate debut after Cioffi was experiencing issues with his throwing arm.

Needing only one out, Baker was unable to provide it as he gave up a single. Head coach Mike Bianco then went to junior Braden Forsyth who managed to get the final out on a fly-out to right field after loading the bases.

“Proud of Baker, even though he came in there and gave up a hit, not a lot of freshman in that kind of environment who would go in there the ball in the strike zone,” Bianco said. “Forsyth is just a great competitor and gets us off the field.”

Another explosive inning for the Ole Miss offense was the difference in the game. For a second time in less than 24 hours, the Red Raiders pitching staff allowed a five-run inning, this one coming in the third inning against the Rebels. All five runs on Sunday occurred with two outs.

A two-run home run by Jacob Gonzalez started things off in the inning followed by RBI-singles from Hayden Leatherwood and Hayden Dunhurst. Ben Van Cleve provided some offense after reaching first on a throwing error by Texas Tech third baseman Parker Kelly, allowing Dunhurst to score.

Gonzalez finished 2-for-4 at the plate with the 2 RBIs and scored a run.

“I expect this performance from me,” Gonzalez said. “I haven’t been doing my best, personally. Been striking out too much, but it’s been a lot of fun. All the pitchers have been pitching good and we’re just having fun.”

Ole Miss closes out their trip to Texas on Monday against No. 9 Texas. First pitch is scheduled for 3 p.m. CT.