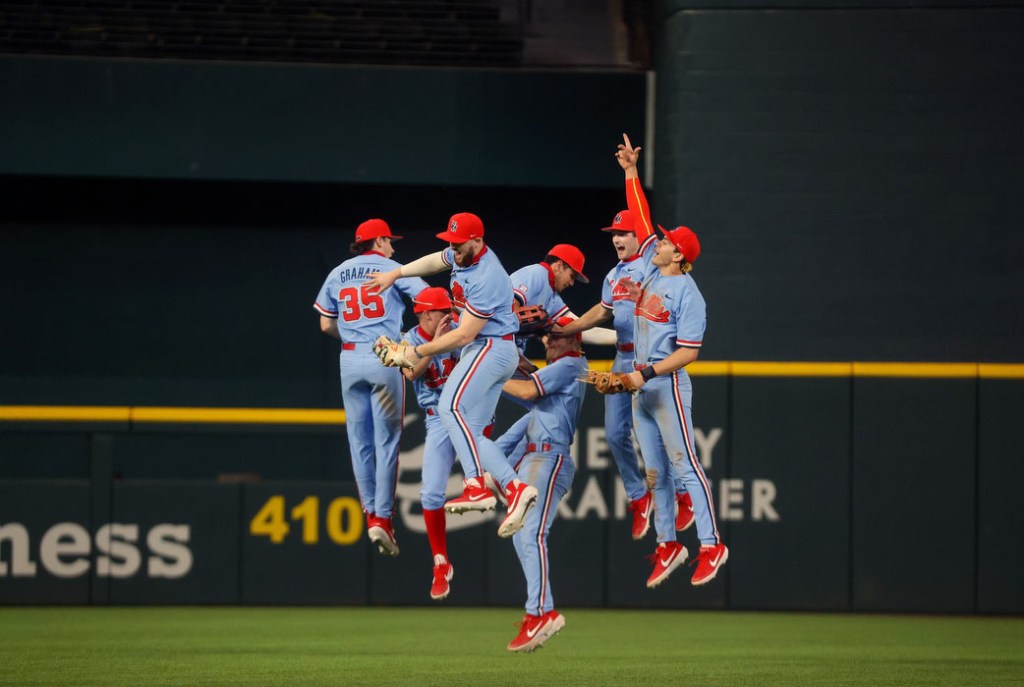 The Ole Miss baseball team celebrates after defeating Texas at the 2021 College Baseball Showdown on February 22nd, 2021 at Globe Life Field in Arlington, Texas. The Rebels are ranked No. 1 for the first time in program history after their weekend sweep in Texas. (Joshua McCoy/Ole Miss Athletics)

The Ole Miss baseball team is the best in the country.

For the first time in program history, the Rebels are ranked No. 1 in three different polls. On Tuesday, D1Baseball and Perfect Game were the latest to put Ole Miss on top after Baseball America ranked the Rebels No. 1 on Monday.

The rankings are a result of a perfect opening weekend in Arlington, Texas, where Ole Miss swept their three games in the College Baseball Showdown. Wins against then No. 10 TCU, No. 3 Texas Tech and No. 9 Texas propelled the Rebels (3-0) to the top of the college baseball world.

Momentum is fully in the Rebels’ clubhouse, a team that has won a program-record 19 straight games dating back to Feb. 15, 2020.

“I don’t think any team has the power and finesse that we have mixed with the great energy and great cohesiveness that we have with the guys,” said pitcher Derek Diamond. “I’ve never been on a team like this. It’s so much fun to play. We’re number one.”

Prior to those comments on Monday, Diamond gave the best outing by a Rebel starting pitcher all weekend. Diamond worked six innings in the Rebels 8-1 win over Texas, giving up one earned run on four hits while striking out eight batters and walking one.

Ace Doug Nikhazy and Saturday starter Gunnar Hoglund also produced solid outings, but were not up to their usual level of production on the mound in their games against TCU and Texas Tech, respectively.

The Ole Miss offense seemingly picked up where it left off last March, when the COVID-19 pandemic halted what was a record-pace to start the season. The Rebels hit 34 home runs in their first 17 games.

“I expect this performance from me,” Gonzalez said after hitting a home run during the Texas Tech game. “I haven’t been doing my best, personally. Been striking out too much, but it’s been a lot of fun. All the pitchers have been pitching good and we’re just having fun.”

Ole Miss brings that fun and their No. 1 ranking home for the first time this season as they kick off a 13-game home stand on Wednesday against Arkansas State. The Rebels will then host Central Florida on Friday for a weekend series.