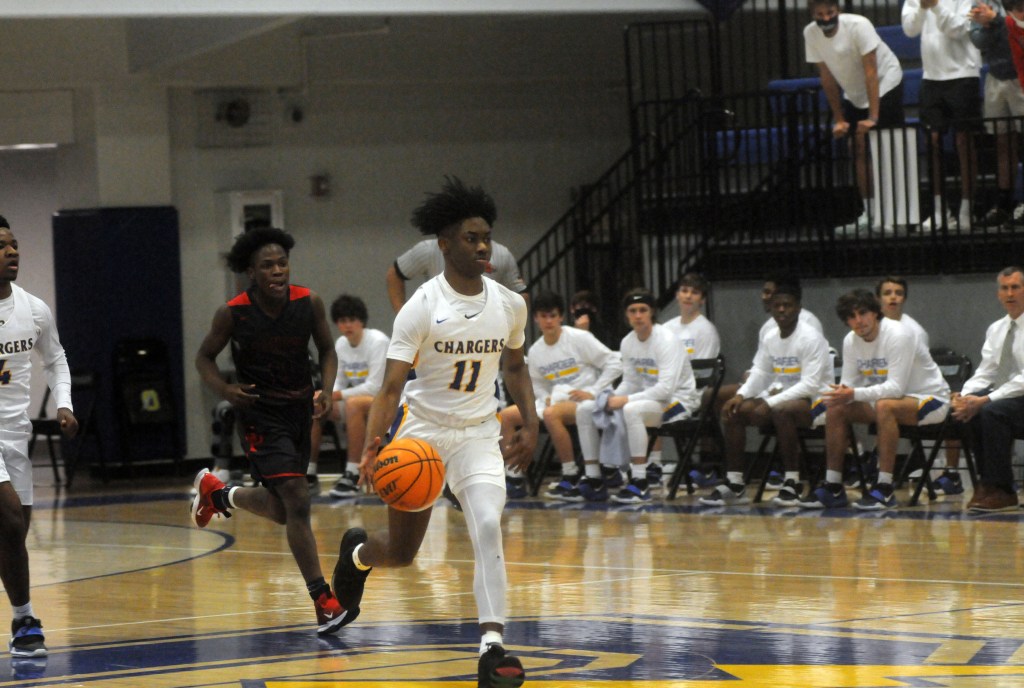 Oxford’s Derrius Southern (11) dribbles up court during their game against South Panola in the first round of the MHSAA Class 6A state playoffs inside the OHS gym on Tuesday, February 23, 2021. The Chargers won 80-43 to advance to Thursday’s second round against Tupelo. (Jake Thompson/Oxford Eagle)

When Oxford’s boys basketball team was able to get back into the gym after being literally frozen out of it for over a week, their excitement was noticeable.

That excitement and energy carried over into Tuesday’s game against South Panola in the first round of the MHSAA Class 6A state playoffs. Oxford cruised into the second round with an 80-43 win over the Tigers inside the Oxford High School gym.

The Chargers came out hot to open the game and never really let up, doubling South Panola on the scoreboard, 41-19 at halftime.

There were few things Oxford did wrong all game, especially Chase Rose. The senior finished with a game-high 28 points, including five three pointers.

Between the second and third quarters, Rose single-handedly took over the game, scoring 21 points in the two quarters.

“Anytime (Rose has) got a little daylight to shoot he’s a threat,” Tyler said. “Once he has one or two go down that opens the drive up for his teammates. I thought we did really good tonight keeping the floor spread and gave us some mismatches. We knew South Panola just didn’t shoot it well, but we had to do what we hadn’t done well this year and that was block out and really value the importance of a defensive rebound and we did that.”

With Oxford’s large lead so early in the second half, Tyler sat most of his starters which has been a luxury the Chargers have not been able to afford often this season.

The situation provided an opportunity for Tyler to empty his bench and allow some of the younger players have valuable playoff minutes, including Drew Carter, Jackson Myatt, Cashe Shows and Christian Blake.

Those Chargers responded to the opportunity, holding South Panola’s starters to only four points for a majority of the fourth quarter.

Oxford will travel to Tupelo on Thursday for a second round matchup at 6 p.m. The winner will advance and play the winner between Hernando and Clinton in Saturday’s quarterfinal round.