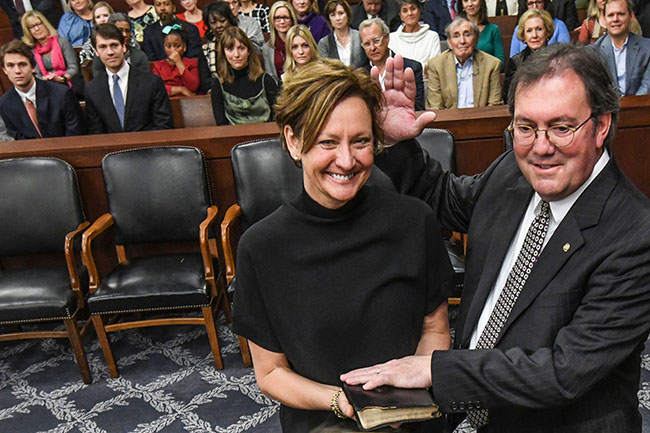 Chad Lamar, right, with his wife Nicole, is sworn in as the U.S. Attorney for the Northern District of Mississippi, in U.S. District Court in Oxford, Miss. on Wednesday, November 22, 2017. Lamar tendered his resignation this week, effective Feb. 27. (Bruce Newman, Oxford Eagle via AP)

William C. Lamar, United States Attorney for the Northern District of Mississippi, announced on Tuesday he tendered his resignation after nearly 30 years of service with the US Department of Justice.

The resignation, effective Feb. 27, was submitted at the request of President Joe Biden and Acting Attorney General Monty Wilkinson who have requested the resignation of all US Attorneys.

Lamar was nominated to serve as US Attorney by President Donald Trump on June 29, 2017. He was unanimously confirmed by the Senate on Nov. 19, 2017 and sworn in by Chief US District Judge Sharion Aycock on Nov. 22 of that year.

“It has been a privilege and honor to serve as an AUSA and the U.S. Attorney for the Northern District of Mississippi and in the town where I was raised,” Lamar said in a statement. “While I leave with a bit of a heavy heart, I’m so proud of the accomplishments, past, present and future, of our office. It will be left in good hands.”

A graduate of Oxford High School, Lamar attended Millsaps College for his undergraduate studies before completing his law degree at the University of Mississippi. Lamar joined the US Attorney’s office in 1991 where he worked as an AUSA in the criminal division for many years.

The US Justice Department is asking all US Attorneys who were appointed by President Trump to resign their post as the Biden administration moves to transition its own nominees. There are 93 US Attorneys across the country.