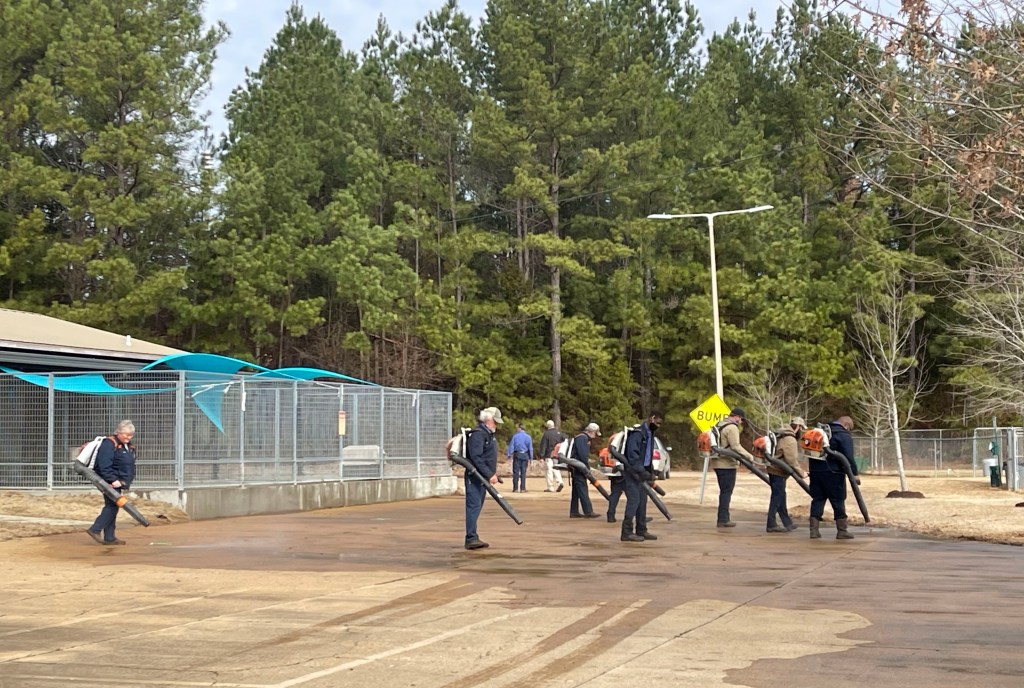 Workers for the City of Oxford are seen cleaing up the parking lot of Mississippi Criterz on Thursday, February 25, 2021. The animal shelter has been closed to the public while an investigation into claims of neglect and abuse is conducted by both the Oxford Police Department and the Lafayette County Sheriff’s Department. (Rebecca Alexander/Oxford Eagle)

After a joint investigation into claims against Mississippi Critterz was announced last week, the organization appears to be cleaning the facility.

The investigation, a partnership between Oxford Police Department and the Lafayette County Sheriff’s Department, was spurred after reports were made regarding the overall care of animals, medical care, over-occupancy and disposal procedures.

Complaints that were filed spanned a two-year period between December 2018 to December 2020, according to OPD.

In the meantime, the shelter has been closed to the public. In a Facebook post on Wednesday, the group put a call out for volunteers to clean crates outside.

On Tuesday, Mississippi Critterz advertised that they were hiring for a new full-time animal control officer.

Thursday morning, at least five City of Oxford trucks were parked outside the shelter as clean-up efforts continued. Workers were seen washing and drying the parking lot outside of the shelter, and one individual said they were cleaning up after the snow storm and that they will reopen on March 2.

This is leading up to a public vigil planned by the Oxford Animal Shelter Watchdogs group at 6 p.m. outside the shelter.

According to watchdog group leader Leigh Ann Hubbard, the group believes the public is being misled by Mississippi Critterz and the City of Oxford.

“We need to come together… to demonstrate visibly that citizens will not allow this to be swept under the rug,” Hubbard said. “We are appalled that after my email demanding access to the shelter today, instead of allowing access, the city has mobilized in what appears to be a massive effort to prepare the shelter for the public to see it.”

In an email to Mayor Robyn Tannehill and others, the group made the following requests: the shelter should be opened to the public, and Dr. Kelsey Hanson of Crossroads Animal Hospital should be allowed in the building to review vet records of the animals and inspect conditions.

The group is also demanding release of the medical records for kittens seen in photos of alleged abuse, protocol for the intake of ill and injured animals and that other veterinarians be allowed inside the facility, including animal shelter expert Dr. Phil Bushby.

The reason for allowing Hanson and Bushby to have access to the shelter, Hubbard said, is that denying access is a “blazing red flag.”

“We have received multiple reports of animals allegedly being forced to endure deplorable conditions over the last year and longer—including medical neglect and dead animals reportedly left far too long without proper disposal,” Hubbard said. “If the reports are not true, why not open the doors to Dr. Hanson?”

In Defense of Animals—Justice for Animals Campaign, Mississippi is also involved in the vigil.

Tannehill has not yet responded to a request for comment, but the City of Oxford released a statement on Wednesday regarding issues at the animal shelter.

The uproar was spurred by social media photos that allegedly showed dogs in outdoor cages before the onset of Winter Storm Uri.

Mississippi Critterz later released a statement saying no dogs were housed outside during the snowstorm, and that the dogs in the photo were only outside temporarily while their kennels were being cleaned.

In the comments of the post, individuals claiming to be former employees and volunteers at the shelter posted photographs of animals that were allegedly mistreated while in custody of the shelter, including what one individual claimed were animal remains stored in trash bags inside a deep freezer.