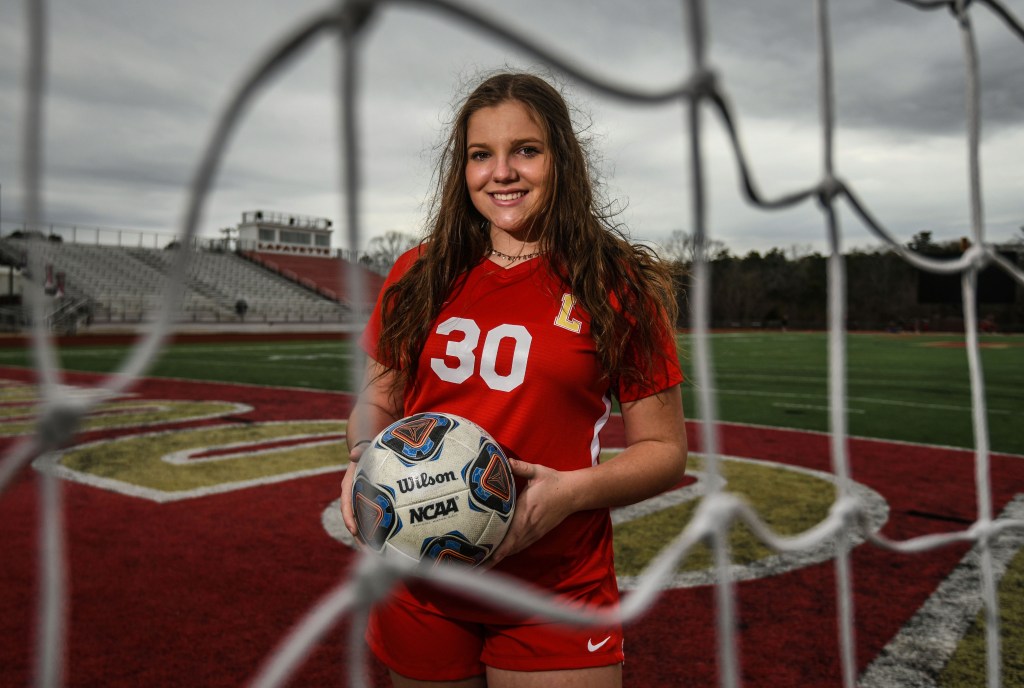 Lafayette High’s Julia Perkins is the 2021 EAGLE’s Player of the Year for girls soccer. (©Bruce Newman)

Julia Perkins saw what her teammate, Hudson Lindsay, did her sophomore year last season and knew she could do the same this year.

Perkins achieved that goal, leading Lafayette’s girls soccer team to a third-straight Class 5A state championship and earning the 2020 EAGLE Player of the Year honor.

A quest for more confidence on the field paid off for Perkins, who scored 16 goals during her sophomore campaign.

The Lady Commodores had the ability to score from all over the field this season with Perkins, Lindsay and others posing as constant offensive threats to opposing teams.

With the attitude of taking that next step and becoming a leader on the field, Perkins became a field general of sorts and making sure her teammates were where they needed to be, or finding them for the score.

“Julia’s just a special kid when it comes to this game,” said Lafayette head coach Melinda Scruggs. “She’s very smart and skilled with her feet. I think her biggest strength that is so hard to defend is with her back to (the) goal, she can turn and find the net so often. If you came up with a highlight reel just of Julia, I think there would be a lot of goals with her doing that.”

Having been a part of the Lady Commodores’ current three-peat dating back to her eighth-grade season, Perkins is poised to become even more of a threat her final two seasons and bring more gold ball trophies back to Lafayette County.

“I feel like I need to step it up,” Perkins said.

When Julia Perkins was not finding the back of the net it was usually Lindsay who was, scoring a team-high 22 goals this season. The duo of Perkins and Lindsay provided a one-two punch that was nearly impossible for opposing team’s defenders to contain for a full 80 minutes.

“I think that’s the one thing, whoever it was, we were looking for one-twos a lot and I think Hudson is super strong at that,” Scruggs said. “She’s one of those who wants to lay the ball off and get it back. I think she’s become very confident as well, in a good way, that’s able say, ‘Hey, give it back. I want it.’ Just her running off the ball, finding the open space. She’s definitely very smart and definitely able to score goals.

Taking after her sister, Caroline Perkins was third on the team in scoring this season with 11 goals. The eighth-grader was one of several young players who stepped up late in the season for Lafayette, including freshman Lillie Grace McCutchen, who scored eight goals and a majority of the coming late in the regular season and in the playoffs.

“Believe it or not, (Julia and Caroline) are actually different players. Caroline brings this extra tenacity,” Scruggs said. “Especially in the last two games. I really saw it shine and I hope that’s something she can even do at the start of our season next year. You could really start to see her flair in the playoffs, for sure.”

The experience of having Rhea in goal paid dividends for Lafayette over the past few years. The Lady Commodores never allowed the ball linger on their side of the field often, but if opposing teams managed to get through they were usually leaving empty handed.

With sports shut down and players left to isolate at their homes for much of 2020, the senior keeper used that time to improve her skills on her own.

“I think for (Rhea) this was her best year just terms of her commitment, her drive,” Scruggs said. “She spent so much time, especially during (COVID) and the time we were out, she spent working out and sending videos (to me). …She would commit herself to do anything and everything the best she could. If it comes to diving or any kind of saves, her body was going to be on it.”

As Freeman went most times, so did the Lady Charger offense this season, as the junior recorded a team-high 30 goals. Coming in as an eighth-grader, Freeman had to bide her time with Morgan O’Connor leading the way, but the onus fell on Freeman her freshman year once O’Connor left a year early to Ole Miss.

The past three seasons have seen Freeman come into her own, even earning an offer and committing to the Rebels herself last year.

“(Freeman) was one that was tapped to replace that production and she’s been consistent every year,” said Oxford head coach Hunter Crane. “When she gets around the net she’s really, really dangerous.”

Similar to Lafayette’s one-two combination of Perkins and Lindsay, the Lady Chargers have Freeman and Strum. If Freeman is marked or not having her best game, Strum was one who was able to carry the load, scoring 18 goals this season.

Once O’Connor left, Strum was another player Crane looked to for help in filling the offensive void and has delivered.

“When they were younger, they both played attacking mid(fielders),” Crane said. “We had some older forwards and so we had those people that we relied on to score goals and they didn’t have to carry that load. When those ladies graduated, we kind of had to lean on them a little bit more to take over that scoring role.”

If both Freeman and Strum were bottled up or contained by opposing defenses, Reeder would become that third option of a three-heading scoring monster for Oxford. In her freshman year, Reeder finished third on the team with 11 goals and is one Crane views as the next one in line to become the constant goal-scorer at Oxford.

Oxford will also be looking to replace a solid goalkeeper next season with Fulton graduating. In her final season guarding the net, she allowed only 12 goals and had 94 saves. Fulton set a new single-season saves record, surpassing another dominant Oxford goalkeeper in Bailey O’Connor.

Oxford basketball swept out of 6A playoffs by Tupelo