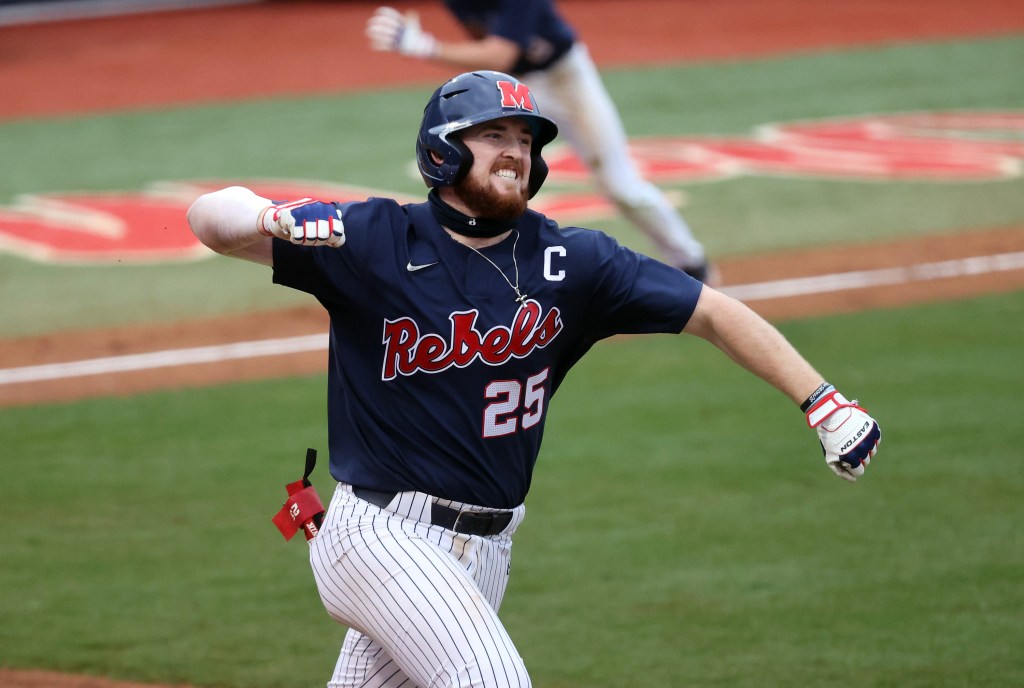 Ole Miss third baseman Tim Elko (25) celebrates after hitting a RBI-single in the bottom of the ninth inning for the walk-off win against Central Florida in Game 1 of a doubleheader at Oxford-University Stadium. The No. 1 Rebels won Game 1, 6-5, but lost, 7-2, in the second game. (Joshua McCoy/Ole Miss Athletics)

Coming off an opening weekend sweep over three top-10 teams the Ole Miss baseball team was flying-high as the nation’s top team, but that feeling is gone after their first home weekend series.

The No. 1 Rebels split Saturday’s doubleheader but dropped their series with Central Florida with a 7-2 loss in the second game of the twin bill at Oxford-University Stadium. The Knights took the opening game of the series with a 3-2 victory on Friday.

Elko’s heroics was about the only positive thing the Rebels can take away from the weekend, offensively.  On Saturday, the Rebels hit .246 (17-for-69) combined in both games and left 12 runners on base. With runners in on base, the Rebels hit .222 (6-for-27).

“Guys are not on time with the fastball like how we were last week,” said Ole Miss catcher Hayden Dunhurst. “Seemed like we were chasing a little bit when we were hunting a fastball a little bit. It’s still early in the season, figuring out the lineups and how things are going to work around each other. It’ll all be good.”

The offense missed reigning SEC Co-Player of the Week Peyton Chatagnier who is out due to a hamstring injury he suffered during the game against Texas on Monday. An exact timeline for the sophomore second baseman’s return is not known.

On the mound, Gunnar Hoglund got the start in the first game. The right-hander went seven innings, giving up two runs on six hits and struck out 10 batters.

Sunday starter Derek Diamond took the mound in the second game, pitching on four days rest. The sophomore made it to the sixth inning but was lifted after 5.2 innings of work. Diamond finished with nine strikeouts while giving up four runs off eight hits.

“I’ve prepared to (have long outings),” Hoglund said. “I’m able to attack these guys, get around them three-four times in the order.”

Bianco went to his bullpen often in the second game, using four pitchers. Sophomore right-hander Cole Baker closed out the nightcap, striking out four of the five batters he faced.

Ole Miss continues their lengthy homestand with a pair of midweek games. They host Memphis on Tuesday and Jackson State on Wednesday before hosting Belmont next weekend.