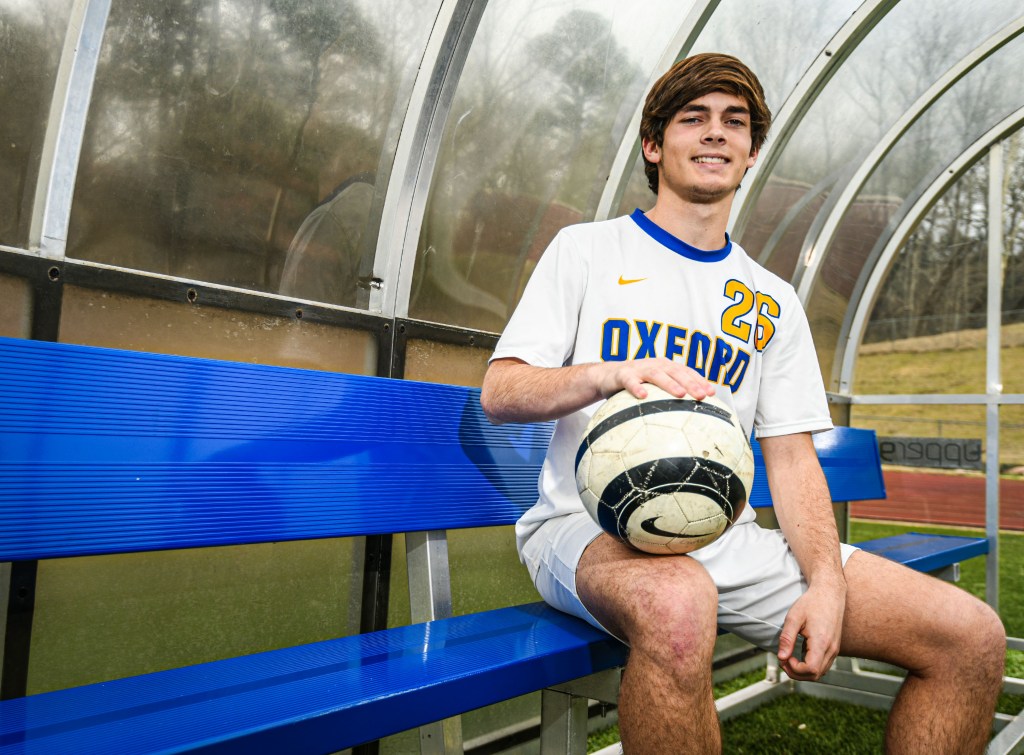 John West Perry knew he was going to have to step up his junior season and it was not a secret, even his teammates told him as much.

The decision to acknowledge the need for a new leader within the Oxford boys soccer team helped Perry have his best season as a Charger and earned him the EAGLE Player of the Year.

Following Oxford’s 2019-20 season, the Chargers were losing their top two scorers in Luke Freeman and and Spencer Norris. With most of the offensive production graduating, it was going to be up to Perry and others to take on a larger role this season.

Due to injuries and other reasons, Perry did not see the field much in his sophomore year but did score three goals. That total improved by more than 20 goals this season, scoring 26 to go with 10 assists.

For first-year boys head coach Hunter Crane, relying on Perry at forward was key for the Chargers success and it paid off with a postseason berth.

“John West is pretty special,” Crane said. “When he gets the ball at his feet he’s really dynamic. Probably one of the fastest guys in the state with ball at feet. That really gives people problems all season long and really a big mismatch is what it was. That’s one of the things we always look at with the formation that we run is where is the mismatch and John West is generally always a mismatch.”

With the season being as difficult as it was with COVID-19 making schedules a fluid situation Perry made the most of his time by constantly improving, even during matches.

Sandoval was the Chargers returning leading scorer from a season ago and along with Perry, provided a one-two threat up top for opposing defenses. He finished behind Perry with 12 goals and two assists while Belk was another who could produce if Perry and Sandoval were being contained by defenses, scoring five goals but recording 18 assists.

Despite being out the middle portion of the season, Scott was a wall for Oxford in goal. The senior came into his own this year, especially late in the year entering the postseason.

“Coker had a great season,” Crane said. “He missed some time with some injuries but he really brought a vocal leadership to us. The back line, he really controlled them and that’s really one of the big aspects why we really liked him in the net was he ability to be vocal.”

The size and speed of Jones up top provided plenty of offensive firepower for Lafayette and he proved it by leading the Commodores with 12 goals.

“He had the ability to take people on one-on-one or sometimes one-on-three,” said Lafayette head coach Gene Anderson. “His passing ability, he’s a very precise passer. …Most the teams we played against, it was like a different level. He was able to get past people, especially dribbling the ball. Dribbling the ball with his speed is impressive.”

Right behind Jones was Arellano with 10 goals and a team-high six assists. The key to Lafayette’s offense was the ability to spread the ball, and goals, around. Jones finished the season with four assists.

There is not that one true threat on the Commodores’ team, leaving it up a score by committee approach for Anderson, which has proven to be successful over recent years.

“Osvaldo this year, I think in terms of the offensive plan, he was a little more versatile than in most year,” Anderson said. “It’s been a long time since we’ve one guy that’s been a killer. We’ve had to kind of do it by committee.”

As a midfielder, Lindsay was one of Anderson’s most impressive players this season. The 6-foot frame allowed him to impose his size and not allow many threats on the Commodore defense. Lindsay and Lisandro Escodebo provided key defensive play all season for Lafayette.

In goal, Leonel kept the Commodores in nearly every match. He allowed 12 goals but recorded 13 saves.