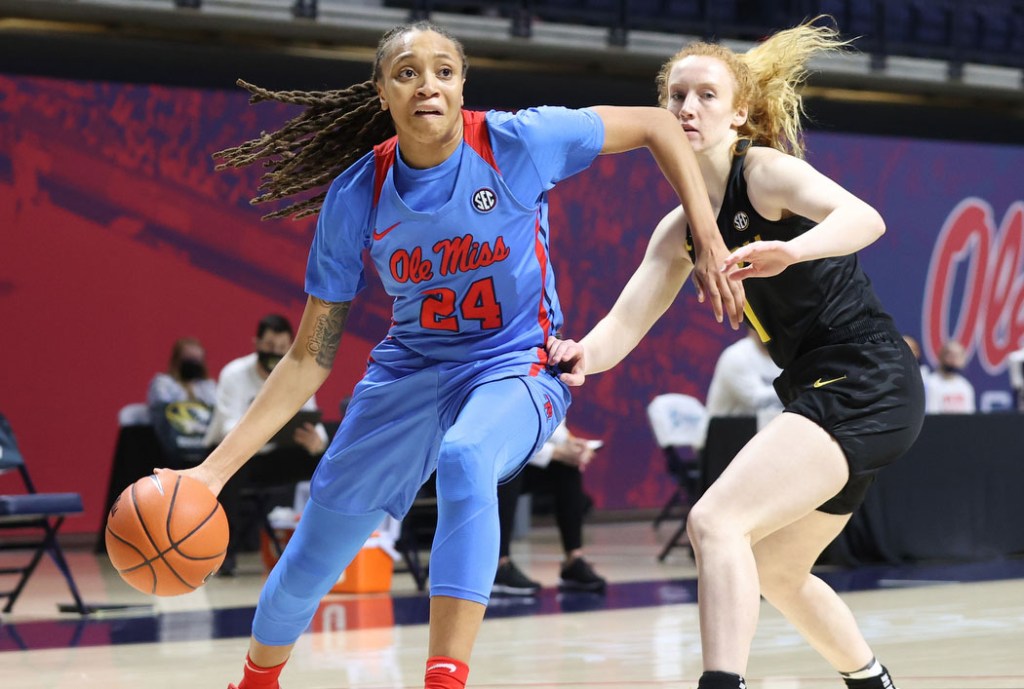 Ole Miss’ Madison Scott (24) against Missouri on Thursday January 14th, 2021 at The Pavilion. Scott was named the SEC Freshman of the Year on Tuesday. (Joshua McCoy/Ole Miss Athletics)

The regular season is in the books, and March madness is underway for the Ole Miss women’s basketball team.

Coming off their win at No. 16 Kentucky on Sunday, the second win over a ranked Kentucky team this season, the Rebels are sitting at 10-10 overall and probably need to stay in Greenville, S.C. for a few days to have a shot at their first NCAA Tournament appearance in 14 years.

With Vanderbilt’s program canceling their season due to the COVID-19 pandemic, it allowed Ole Miss, who is the No. 11 seed in this week’s Southeastern Conference Tournament, to earn a bye into Thursday’s second round. That was the good news; the bad news is they must start their postseason journey against No. 13 Arkansas, who is six seed in the tournament.

If the Rebels are able to get past the Razorbacks and into Friday’s quarterfinal round, they will be greeted by No. 14 Tennessee and the three seed in the SEC Tournament.

Despite the two obstacles in their way, Ole Miss head coach Yolett McPhee-McCuin is still confident there is a path to an NCAA Tournament at-large bid.

“I think it makes our (NCAA Tournament) chances really good,” McCuin said. “Just because of our conference. When Arkansas beat UConn, I think their record was 3-8. That’s how good the SEC is. With a couple teams not playing and the Ivy League not playing this year, it’s going to be hard to not look our way. Knowing that the committee looks at your last games and how we’ve been playing, hopefully it works in our favor.”

Ole Miss and Arkansas met in Fayetteville on Feb. 19, a day later than scheduled due to Winter Storms Uri and Viola hitting the Mid-South.

After getting dug out of ice and snow and flying out of Memphis, the Rebels made it to their game but left with an 84-74 loss that McCuin felt was not her team’s best effort nor the team she had been watching all season long.

“It was a mess when we went up there,” McCuin said. “It’s not an excuse, but I said in my (postgame) interviews that I don’t even know that team that played. I think we all were out of sorts, even the coaches. So, I don’t think we gave our best effort. I think it’s going to be a good game.”

This week marks McCuin’s third trip to the SEC Tournament with Ole Miss. The last two trips have resulted in a one-and-done and having the season come to an end in early March.

With the No. 1 recruiting class, including SEC Freshman of the Year Madison Scott, and transfer Shakira Austin, McCuin’s confidence level is higher than it has been the past two trips to South Carolina.

“I have a different team (this year),” McCuin said. “Sometimes it felt like I was going in to eat and I had no groceries in the fridge. Now I have groceries, we’ve just got to cook it right. This is a totally different year for us.”

Ole Miss and Arkansas tip off on Thursday 25 minutes after the Alabama and Missouri 6 p.m. game concludes. The game will air on the SEC Network.