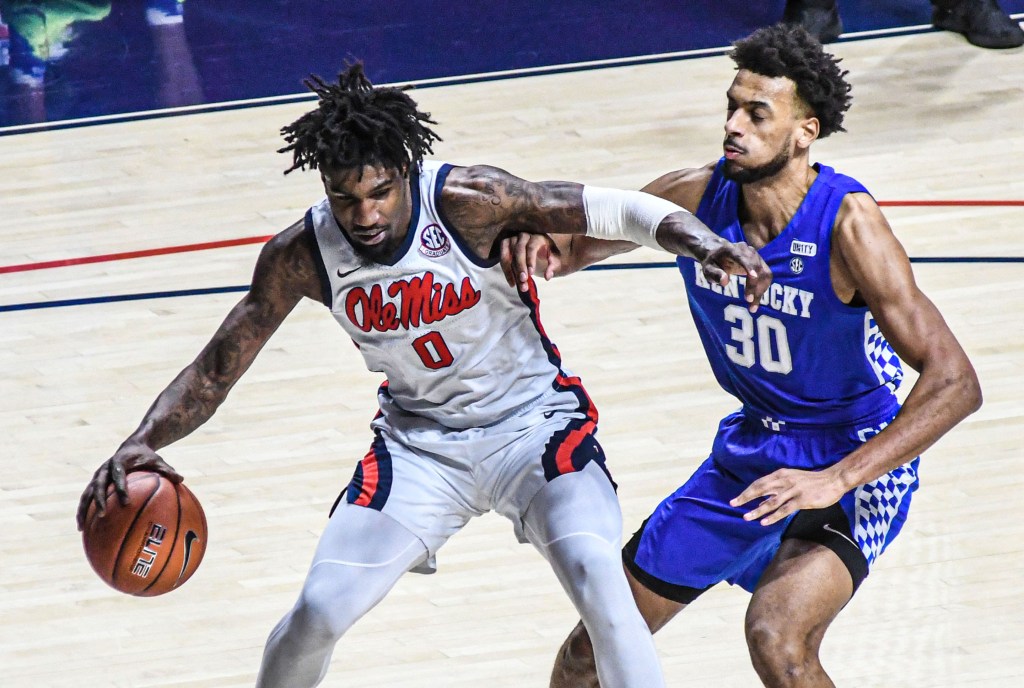 Ole Miss forward Romello White (0) against Kentucky at The Pavilion on Tuesday, March 2, 2021. White and Devontae Shuler will be honored ahead of Saturday’s game against Vanderbilt for Senior Night. The two are not using their extra year of eligibity for next season. (Bruce Newman)

The Ole Miss men’s basketball team is still in the midst of concluding its regular season on Saturday in an added home game against Vanderbilt, but its future is already taking shape.

On Thursday, Ole Miss head coach Kermit Davis announced graduate transfer Dimencio Vaughn and senior Khadim Sy were leaving the program for what Davis called “personal reasons.” Davis did not expound on Vaughn and Sy’s departure beyond that when asked by local media.

Vaughn and Sy had not played significant minutes over the last two weeks where the Rebels (14-10, 9-8 Southeastern Conference) have won six of their last eight game. Both combined for 4.8 points per game this season and neither were averaging more than 11.1 minutes a game.

There was more upheaval with the Rebels roster with Davis announced the program would be honoring Devontae Shuler and Romello White for Senior Night ahead of Saturday’s game.

Both players have the ability to use the extra year of eligibility awarded to all winter sports by the NCAA due to the COVID-19 pandemic, but Shuler and White are planning to test the professional waters next year.

“I just have not had one conversation about (them coming back),” Davis said. “We’ve just been trying to be the best team we possibly can be. If they wanted to have that conversation at some point, they can. But, I leave that strictly up to those guys. I really think they’re both ready to take a next step and play professionally. If something didn’t go right and they want to have other conversations after that, I’m open to that for sure.”

As for the game itself, Ole Miss looking for a little bit of revenge after losing at Vanderbilt a week ago and seemingly bursting their NCAA Tournament bubble chances for good. A lengthy run at next week’s SEC Tournament in Nashville, if not winning the entire thing, is probably the only recipe for the Rebels to get back to the NCAA Tournament.

A win and some help from other games could put the Rebels as the No. 5 seed in next week’s tournament, but they could wind up as low as the No. 8 seed. They are locked in to a second round game next Thursday no matter Saturday’s outcome.

Ole Miss and Vanderbilt tip off at 6 p.m. CT on Saturday. The game will air on the SEC Network.