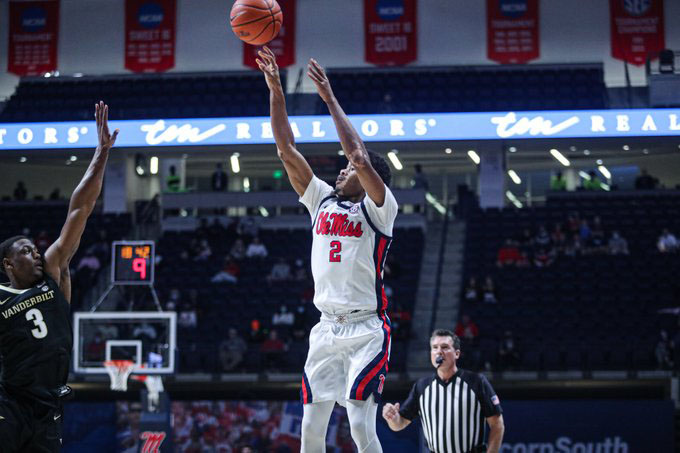 The Ole Miss men’s basketball team exacted a little revenge in the process of re-entering the NCAA Tournament bubble conversation.

The Rebels defeated Vanderbilt 56-46 at The Pavilion, a week after the Commodores won in Nashville and seemingly bursting  any remaining NCAA Tournament hopes for Ole Miss (15-10, 10-8 Southeastern Conference).

Prior to the game, Devontae Shuler and Romello White participated in Senior Night festivities in a tapered down ceremony due to COVID-19 protocols.

Shuler finished with five points but played only 16 minutes due to foul trouble, picking up two in the first three minutes of the game. He fouled out with a little more than two minutes remaining in the game.

White finished with 11 points in what is more than likely the pairs final game in Oxford after deciding to not return for an extra year next season.

“We turned good defense into offense, which we needed to tonight,” said Ole Miss head coach Kermit Davis. “We struggled kind of with shot making over the last six, seven minutes.”

As for the game itself, the Rebels got a glimpse of what they will look like next season with Shuler not on the court for much of the game. Jarkel Joiner finished with a team-high 15 points while Luis Rodriguez pulled down a game-high eight rebounds.

With Shuler on the bench, Matthew Murrel and Austin Crowley saw increased minutes on Saturday. Murrel scored eight points and pulled down four rebounds while Crowley finished with three points and two rebounds.

The Rebels defense had better success against a struggling Vanderbilt offense, out-rebounding them 34-24 and held the Commodores to zero second chance points with 24 defensive rebounds. Vanderbilt (8-15, 3-13) committed three shot clock violations with two occurring within a few possessions of one another in the first half.

Ole Miss held the Commodores to 29 points less than what they scored in last Saturday. Vanderbilt did not make a shot over a near 10-minute stretch in the second half.

“Last game (against Vanderbilt) our energy wasn’t as great as it should be,” White said. “That’s just what it was. We knew what we had to do. Coach (Davis) made an emphasis on interrupting them and messing with them. I felt like we all locked in on defense. Everybody brought great energy.

Ole Miss will have to wait until Sunday to find out what seed they will be for next week’s NCAA Tournament in Nashville. Despite winning on Saturday, the Rebels could either be the No. 5 or 6 seed depending on what Tennessee does against Florida on Sunday morning.

The Rebels entered Saturday with a NET ranking of 56 and were the last time in the Last Four Out group ESPN’s Joe Lunardi’s latest Bracketology projections. A deep run in the SEC Tournament is more than likely needed for the Rebels to go dancing this year.

“We’ve got a tournament resume. It’s got holes in it just like those 10-15 (teams) just like us,” Davis said. “We’ve got work to do and we know that. We’ve got to go to the (SEC Tournament) and play well.”