No. 4 Ole Miss walks off for sweep of Belmont, wins fifth straight 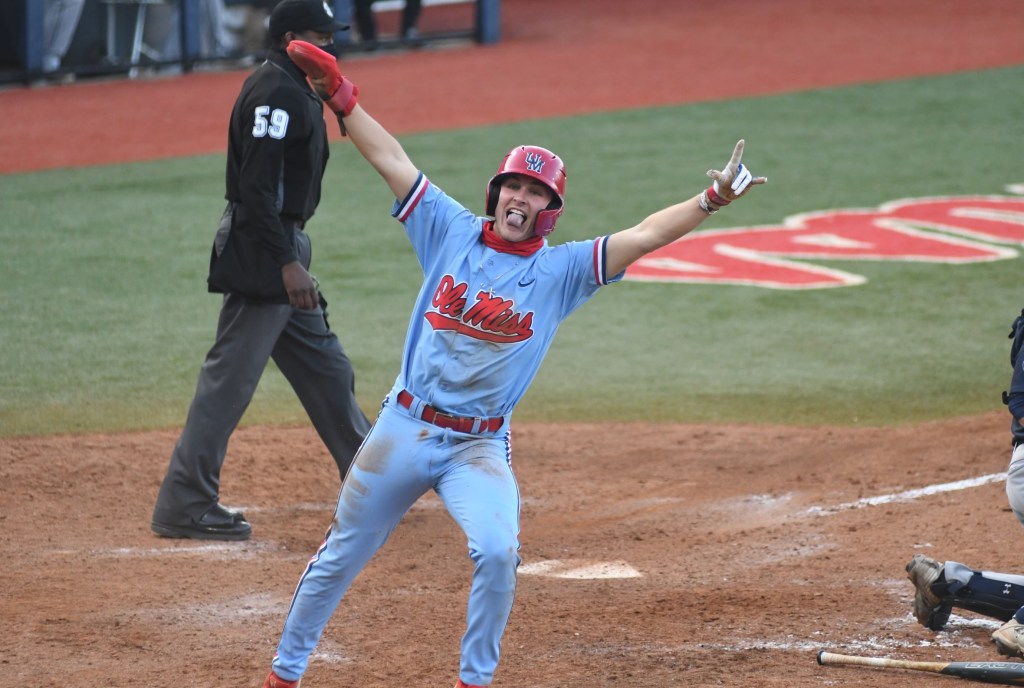 Ole Miss centerfielder Justin Bench celebrates after scoring the winning run in the bottom of the ninth off of Hayden Dunhurst’s walk-off RBI-single against Belmont at Oxford-University Stadium on Sunday, March 7, 2021. The Rebels won 8-7. (Bruce Newman)

No. 4 Ole Miss relied on the long ball but it was a single by Hayden Dunhurst that became most important hit on Sunday.

The Rebels won 8-7 in walk-off fashion over Belmont after the Dunhurst’s game-winning hit in the bottom of the ninth on Sunday at Oxford-University Stadium, completing their first sweep of the season. The Rebels (10-2) have now won five straight since dropping their series with Central Florida last weekend.

Of the seven hits recorded by the Rebels, only three did not leave the confines of Swayze Field.

“If you’re in the bottom of the ninth and you want to score, you want the guy that’s your best hitter at the plate. Your three-hole guy,” said Ole Miss head coach Mike Bianco of Dunhurst. “I think we were pretty comfortable that he was going to be able to move it somewhere. He’s had a terrific year up to this point.”

Falling behind 2-0 after the top of the first inning, the Rebels responded with two solo home runs from Justin Bench and Tim Elko to square the game back at 2-all. For a second straight game, Graham hit a home run with this one a solo shot in the third inning to give the Rebels the 3-2 lead at the time.

Belmont (3-5) used runs in the fifth and seventh innings to tie the game at 4-all, but Elko continued his strong week at the plate with a three-run home run in the seventh to break the game open.

“I’m feeling locked in,” Elko said. “Just kind of like I’ve been saying, see-ball-hit-ball. Not trying to do to much. Just put good swings on balls and that’s what I’ve been doing.”

Taylor Broadway came in the top of the ninth looking for his second save of the season. Belmont managed to tie the game off a two-RBI double by shortstop Jack Capbianco. With Dunhurst’s hit, Broadway picked up his second win in as many days for a 2-0 record on the year.