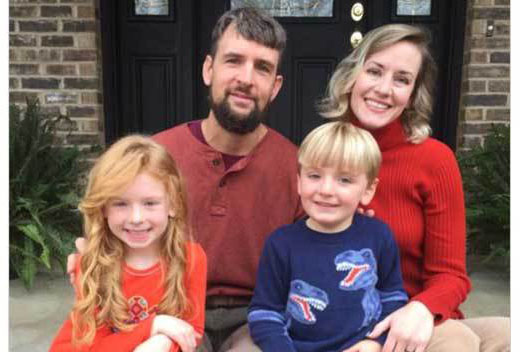 Matthew Ellington, top left, and his two children Evangeline, bottom left, and Linclon, bottom right, died from injuries sustained when their Volkswagen Jetta collided with a Panola County garbage truck at the Highway 6 and F.D. “Buddy” East Parkway intersection on the morning of March 4. A peition recommending safety improvements was created in the wake of the fatal accident. (Courtesy of Coleman Funeral Home)

In the wake of last week’s fatal wreck, a petition to make the area around the Highway 6 and F.D. “Buddy” East Parkway intersection safer has gotten the attention of the Mississippi Department of Transportation.

Created on change.org last Friday, the petition is providing recommendations for safety improvements to help prevent another incident such as the one on March 4, which took the life of Matt Ellington, 40, and his two children when their Volkswagen Jetta collided with a Panola County garbage truck around 7:30 a.m.

“This petition seeks to make the following changes on the areas of Highway 6 in Oxford that see increased traffic from the Lafayette County Schools. It is imperative to make changes to increase safety for our children and our community,” the petition, created by Carrie Long, read. “Simple measures can be taken to reduce the risk of tragedy occurring again and increase safety for all traveling in this area during and after school hours.”

Some of the recommendations in the petition, which had over 5,100 signatures as of Tuesday morning, include extending the 55 miles per hour (MPH) zone to at least half a mile east of F.D. “Buddy” East Parkway. The current speed limit increases to 65 MPH west of the intersection. The petition also recommends initiating a 45 MPH zone with signs and flashing lights from at least a quarter of a mile west of the Highway 6 and Highway 334 exit to at least a quarter of a mile east of the intersection during Lafayette County School drop-off and pick-up hours on school days.

The EAGLE contacted MDOT and Northern Transportation Commissioner John Caldwell on Monday regarding the petition. Caldwell said he was “very aware” of the petition and acknowledged the safety concerns within it.

“The petition is a much-appreciated, heartfelt outcry from those that live, drive and work in the area,” Caldwell said. “Of course it matters. Demands on the petition are reasonable. We need the absolute best and most complete response that we can muster for all concerned. Until the investigation and engineering assessments are made, we won’t know which or how many improvements will be recommended or fully adopted.”

Caldwell stated whenever there is a fatal accident on a highway in the state, the reaction to make safety improvements is a natural one.

“Safety assessments are ongoing throughout the state,” Caldwell said. “Whenever there is a fatal crash, additional resources and efforts are immediately shifted to see what happened, how it happened and how it could be prevented in the future. The investigation is not complete, but the reality is painful and demands swift action on our part.”