McCuin: If Ole Miss is not a NCAA Tournament team, then “Who is?” 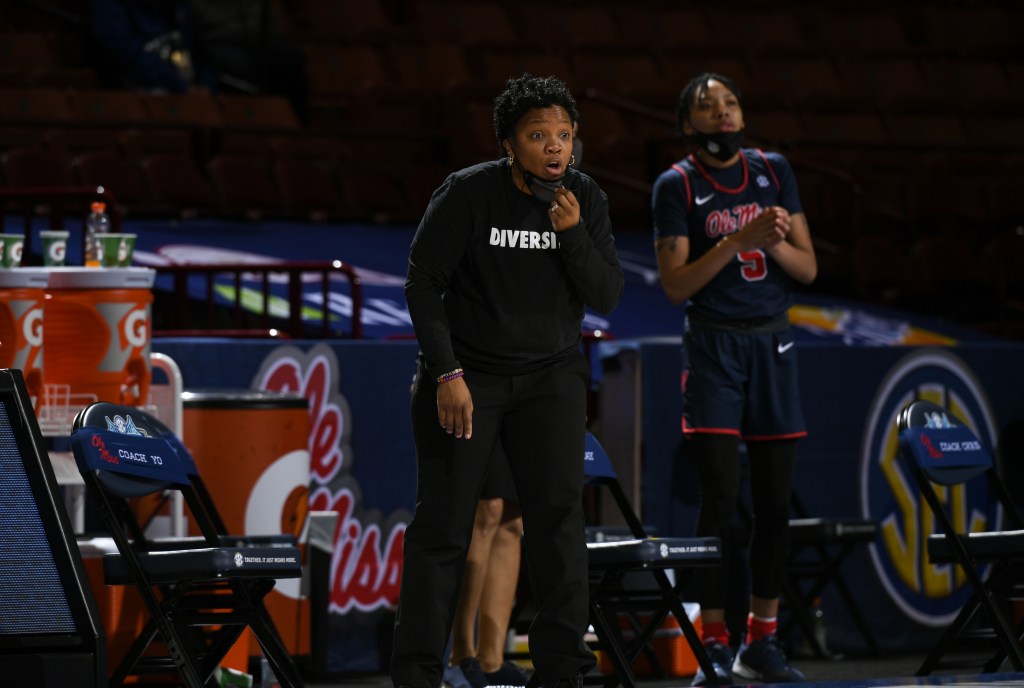 Ole Miss women’s basketball head coach Yolett McPhee-McCuin coaching her players during thir game against Arkansas in the second round of the SEC Tournanent in Greenville, S.C. on Thursday, March 4, 2021. (Todd Van Emst/SEC)

A long week of waiting is underway for the Ole Miss women’s basketball team.

For the first time in the Yolett McPhee-McCuin era, the Rebels are sitting on the bubble and on the cusp of the program receiving its first bid to the NCAA women’s basketball tournament since 2007.

Unfortunately for Ole Miss, and every other bubble team, there are no more games left to improve résumés; only the waiting game until the bracket is officially announced on March 15.

The Rebels (11-11) saw their Southeastern Conference Tournament run end on March 5 with a 77-72 loss to No. 14 Tennessee in the quarterfinal round. Ole Miss was looking for its third straight win over a ranked opponent after defeating No. 13 Arkansas the night before in the second round.

With three wins over top-20 teams this season, including two against No. 16 Kentucky, McCuin said she was more than confident her team was worthy of an at-large bid to the NCAA Tournament to keep their season alive.

“If we’re not an NCAA tournament team, then who is?” McCuin said following the loss to Tennessee. “With our COVID issues in the beginning of conference play, snowstorm issues, then continuously proving ourselves by beating quadrant one teams, then going on the road to Tennessee, losing by one, then tonight by five when our star player hurts her back to start the fourth quarter? Absolutely we’re an NCAA tournament team.”

With one of the youngest rosters in the country, the Rebels continued to show signs of a program turnaround in McCuin’s third year of the rebuild. Led by SEC Freshman of the Year Madison Scott and the No. 1 recruiting class, the Rebels youth showed signs at different times of the season what the future could potentially look like in Oxford.

But, Scott and her teammates are focused on the present.

McCuin continued on in her postgame press conference about the strength of her team’s resume, including the win over Arkansas who defeated No. 3 UConn on Jan. 28.

“We’re fun to watch. We play a great style,” McCuin said. “We’re in the best league in the country. If we get in, we’re going to wreak havoc in the NCAA Tournament. I hope they consider all of this. We have more Quadrant One wins than a lot of these conferences that they’re saying are in. They don’t even have top-25 wins. We have three of them versus teams that are in the top-16 in the country. We definitely should be in. And ask any SEC coach.”

In ESPN’s latest bracketology update by Charlie Creme on Monday night, Ole Miss was sitting behind Notre Dame and BYU in the First Four Out group. One factor that helps the Rebels case is their NET ranking of 41, sitting well inside usually bubble team territory.