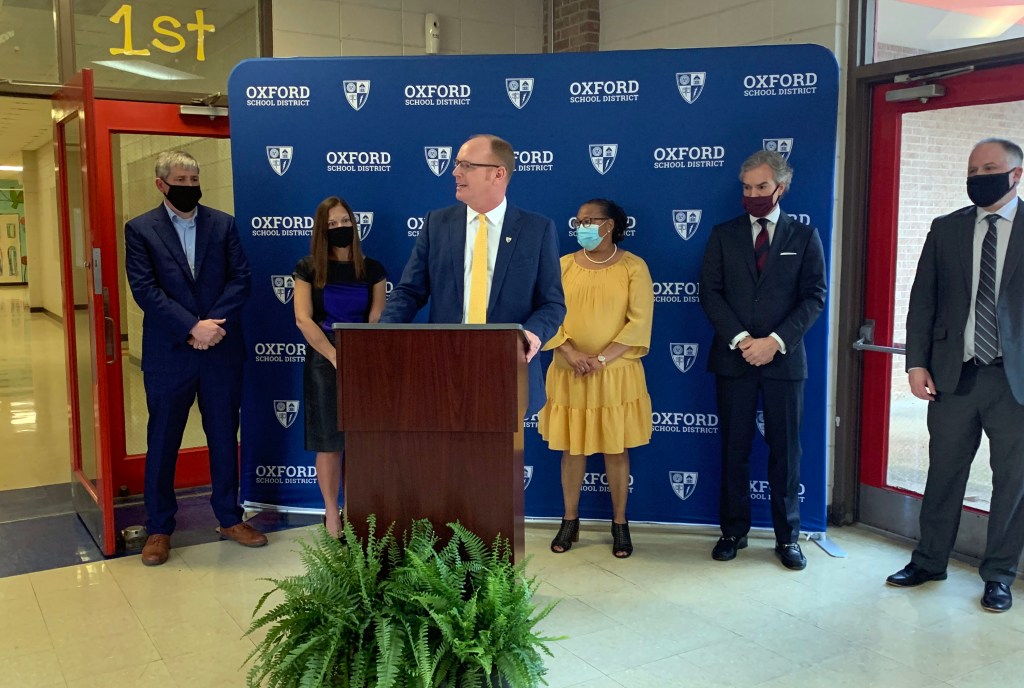 Bradley Roberson speaks following the Oxford School Distrct’s Board of Trustees naming him the next Superintendent of Schools. Roberson will be replacing Brian Harvey, who is retiring at the end of June. (Jake Thompson/Oxford Eagle)

Twenty years later, the goal was accomplished as Roberson was named the next superintendent for the Oxford School District, effective July 1. The OSD Board of Trustees announced their decision during a press conference at the OSD central office on Wednesday.

Roberson is the successor to current OSD superintendent Brian Harvey, who is retiring at the end of the current school year on June 30.

“I’ve worked in this profession and in this (school) district for 20 years, for this moment,” Roberson said. “This is my dream job. Have I had aspirations of being a superintendent? Absolutely. But my dream job was to be the superintendent in the Oxford School District. To serve this community in this capacity.”

A native of Ripley, Roberson moved to Oxford in 1998 to attend the University of Mississippi. He and his family have lived in Oxford ever since, outside of a two-year stint as principal at Senatobia High School from 2013 to 2015.

When Harvey announced his decision to retire in November and step down as OSD superintendent, the School Board of Trustees began a search process to find his replacement.

Working with the Mississippi School Board Association, the OSD Board officially began the search process in January. Meetings with stakeholders, teachers, parents and staff were held to receive feedback on what they were looking for in their next superintendent.

Nine candidates applied and of those, four were chosen for interviews with the Board, which ran from Feb. 22 to March 2. Following the initial interviews, the Board cut the field in half to two finalists, where Roberson emerged as the Board’s choice.

“No one doubts that Bradley is a brilliant educator and a hard worker,” said OSD Board President Ray Hill. “What sets Bradley apart, however, is his passion for the Oxford School District and his belief that every child deserves nothing less than the best educational experience we can offer.”

When Roberson returned to OSD in 2015, he was hired as the principal of OHS prior to being named the next assistant superintendent for OSD in 2018.

Following Spring Break next week, Roberson is going to start holding what he called “town hall meetings” and conversations with stakeholders across the community. From those, Roberson will then formulate a 90-day plan for when he officially takes over as superintendent.

“It’ll be from those conversations along with our strategic plan, that I will develop my first 90 days superintendency plan that will rollout to the community at some point before summer,” Roberson said. “It’ll set the tone for year one and years moving forward.”

Another task Roberson will be charged with is helping find his successor as the next assistant superintendent. That search will begin once OSD returns from Spring Break on March 21.