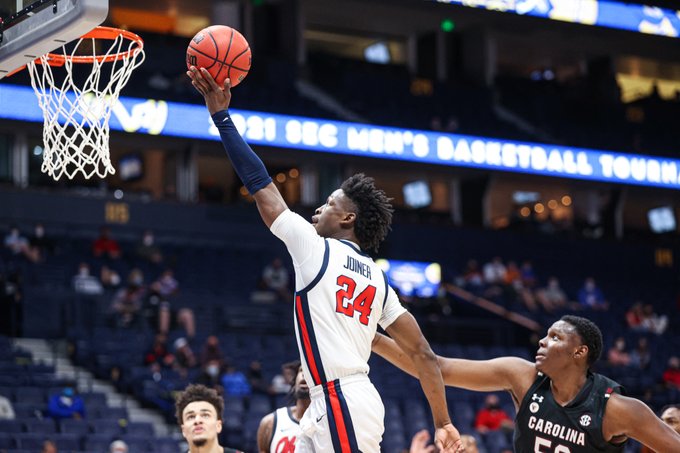 Ole Miss guard Jarkel Joiner (24) attempts a layup against South Carolina during their game in the second round of the SEC Tournament at Bridgestone Arena in Nashville on Thursday, March 11, 2021. The Rebels won 76-59. (Joshua McCoy/Ole Miss Athletics)

The first step in getting back to the NCAA Tournament was taken by the Ole Miss men’s basketball team in Nashville on Thursday.

Knowing a deep run was required more than recommended to earn their second-straight bid to the dance, the Rebels defeated South Carolina 76-59 in the second round of the SEC Tournament at Bridgestone Arena.

The wins need to keep coming, starting against No. 3 seed LSU in the quarterfinal round on Friday where many pundits feel a win to get to the semifinals would be enough to punch the Rebels’ ticket for a trip to Indianapolis next week.

On a night where it took Devontae Shuler until the second half to get going, offensively, Jarkel Joiner and Romello White picked up the slack. Joiner finished with a game-high 18 points while White added 17 points and seven rebounds.

KJ Buffen had a strong start to the game and finished with eight points and nine rebounds after averaging four boards per game throughout the season.

Following Thursday’s game, Joiner stated they have been in a postseason mode and a do-or die mentality since Feb. 20. Winners of eight of their last 10 and and three straight, Ole Miss is keeping their tournament pulse alive for another day.

“When we played Mississippi State at home, (Ole Miss head coach Kermit Davis) said, ‘This is the playoffs,'” Joiner said. “We just try to take every game as a play-in game.”

Ahead of Thursday’s game against the Gamecocks, Ole Miss (16-10) moved into the First Group Out according to ESPN’s Joe Lunardi’s latest bracketology projections.

Having taken care of their first piece of business, the Rebels now turn their attention to an LSU team that they did not fare well against when the two teams met in early January. Following South Carolina having a COVID-19 issue and their Jan. 9 game at Ole Miss being postponed, the SEC moved up the Rebels’ game against LSU to fill the open date.

The Tigers came to Oxford on short notice and left with a 75-61 win over Ole Miss. The two teams were then scheduled play in mid-February but the two winter storms that hit the Mid-South took away the Rebels chance at getting some revenge and removing the blemish off their resume.

Ole Miss gets that chance again on Friday with much more at stake.

Ole Miss and LSU will tipoff at approximately 8:30 p.m. CT and will air on SEC Network.