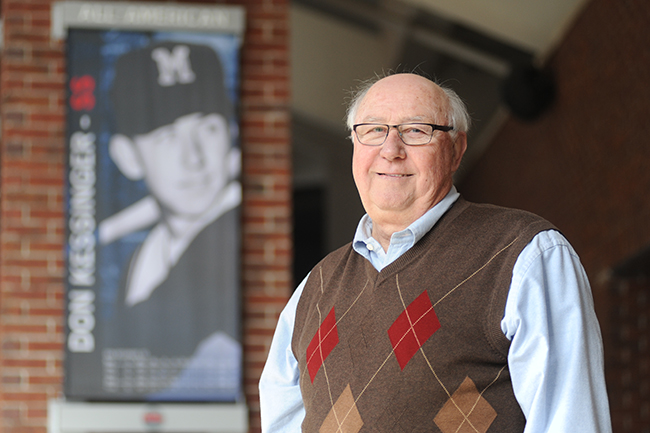 Don Kessinger is a legend among Ole Miss baseball lore, and this spring, he will be immortalized as one of the program’s greats.

The school announced on Thursday that Kessinger’s baseball jersey number will be retired during the LSU series in April. The ceremony will take place on April 22, prior to the Rebels’ Thursday game against the Tigers.

Kessinger wore No. 11 on the way to six MLB All-Star selections and two Gold Glove selections as the shortstop for the Chicago Cubs. Ole Miss will display the number on the outfield wall at Oxford-University Stadium, joining Jake Gibbs as the only two Rebel baseball players to have their numbers retired.

“I’m excited this honor is being bestowed upon Don Kessinger,” said Ole Miss baseball head coach Mike Bianco. “As many people know, this will only be the second number in Ole Miss baseball history to be retired. Don is arguably the greatest player who has ever put on the uniform here. He’s had a sensational career, not only as a Rebel, but in his long, illustrious career in Major League Baseball as a member of the Chicago Cubs. I’ve always appreciated Don and what he has meant not only to Ole Miss, but to me personally. He’s been a great ambassador to Ole Miss baseball and pillar in our community.”

While at Ole Miss, Kessinger excelled on both the baseball diamond and the basketball court from 1962 to 1964, earning All-SEC and All-America honors in both sports. Kessinger averaged 22.2 points per game, ranking him fourth all-time in program history and 11th all-time with 1,553 career points.

On the baseball field, Kessinger finished with a .400 career batting average that still remains the program-leading average for Rebel hitters. The batting average is still good enough for sixth all-time in the Southeastern Conference. Kessinger’s best-hitting season at Ole Miss came in 1964, where he led the SEC with a .436 average, which still holds up as the best single-season hitting performance in program history. Nine triples and 44 stolen bases puts him 10th-best in each category at Ole Miss.

Following his 16-year playing career with the Cubs, Kessinger served as a player-manager for the Chicago White Sox during the 1979 season. In 1969, he set a then-MLB record for consecutive errorless games at shortstop with 54.

“I am thrilled, honored, overwhelmed and humbled by this gesture,” Kessinger said. “I will be forever grateful that my number will be hung next to the great Jake Gibbs in the outfield. I am also so privileged that I have had the honor of representing Ole Miss through the years in two sports. My teammates, coaches and those Ole Miss fans who have encouraged my career will never be forgotten. I have also been blessed by the amazing young men I got to coach at Ole Miss. They taught me so much. I could not be where I find myself today without the support of all. And to my family, I am thankful for your constant love, support and encouragement through my athletic career. But most of all, I am grateful to my Heavenly Father for gifting me the skills, the health and the ultimate successes I have had. I pray that I have honored Him above all.”

Named an SEC Legend, as well as a member of the Chicago Cubs, Ole Miss Sports, Mississippi, Arkansas, Chicago and National High School Halls of Fame, Kessinger kept close to his alma mater. In 1991, Kessinger returned to Ole Miss to serve as head baseball coach, taking over for Gibbs.

In his six seasons as coach, Kessinger won 195 games and in 1995 led Ole Miss to its first-ever 40-win season and its first NCAA Regional berth since 1977.