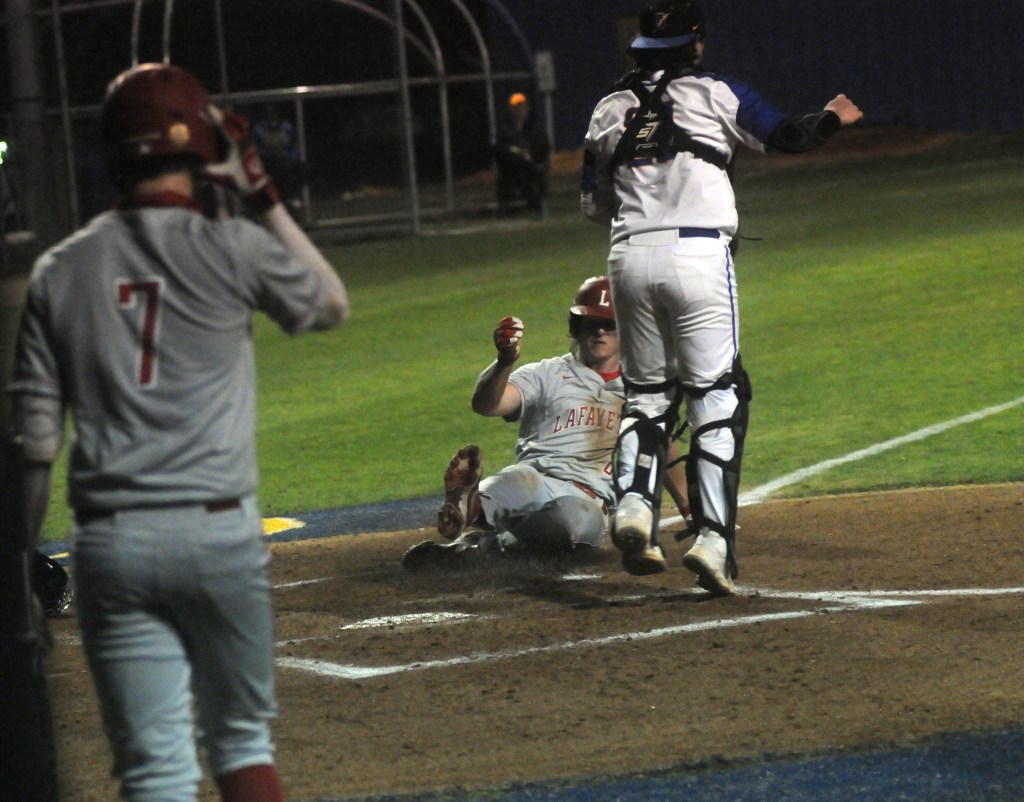 Lafayette’s Will Dabney (8) scores in the second inning during their game against Oxford at Edwin Moak Field on Friday, March 12, 2021. The Chargers won 4-2. (Jake Thompson/Oxford Eagle)

For the first five innings, Oxford was struggling at the plate and being kept off-balance but then something clicked in the sixth inning.

The Chargers used five straight hits to score three runs and erased a one-run deficit to defeat Lafayette 4-2 at Edwin Moak Field on Friday. Oxford (7-1) grabbed the first two games of the three-game crosstown series against their rival.

Lafayette (4-4) had Wilson Varner on the mound who was dominant a majority of his complete-game outing. Unfortunately, the Chargers figured him out a third time through the line up.

“Wilson was electric (tonight), give him credit,” said Oxford head coach Chris Baughman. “Until we finally got something going there in the sixth he was lights out. He didn’t deserve to lose the ball game. …We just didn’t have a very good approach tonight. We didn’t have the same approach (as on Tuesday).”

Three nights removed from losing 12-2 in five innings, the Commodores started Friday’s much differently, starting with Varner on the mound.

At the plate, Lafayette gave themselves plenty of opportunities but managed to only score two runs in the first two innings. Scoring chances were left on the field as the Commodores stranded 10 men on base and struck out 10 times.

Tyrus Williams was out of the starting lineup after injuring himself during his first at-bat on Tuesday. The center fielder did enter the game in the top of the seventh and hit a single on his first pitch he saw.

Lafayette head coach John Walker said Williams is still day-to-day as he labored running to first after getting the hit.

Making his first appearance on the mound this season, Hays Roth provided Oxford with four innings of shutout baseball, including striking out eight of the first 10 batters he faced. The senior, who entered in the fourth inning in relief of starter Brady Stinnett, picked up the win.

Roth helped himself out at the plate, going 2-for-2 with a run scored. Lock Elliott went 2-for-2 for two runs batted in. Lafayette’s Elijah Thompson went 1-for-3 with an RBI while catcher Carter Newman and right fielder Will Dabney scored a run each.

Oxford and Lafayette will conclude their season series on Saturday back at W.V. Brewer Field. First pitch is scheduled for 2 p.m.